On July 10 2012, 5-year-old Keian Grainger Blundell was diagnosed with T-Cell Acute Lymphoblastic Leukemia. Keian responded well to treatment and by August 2012, he was in remission. On December 6 2012, it was discovered that his Leukemia had relapsed.

In order to give Keian the greatest chance at a cure, he required intensive cranial and total body radiation, as well as a bone marrow transplant – the best chance was to receive marrow from a matched sibling. On April 5 2013, at 10 months old, Keian’s baby brother, Joren underwent surgery to donate marrow to Keian.

Keian remained in hospital isolation for two months, during which time he “celebrated” his 6th birthday. As his healing journey began, it appeared as though he was doing incredibly well. On July 29, he returned to the hospital in anticipation of his central line removal; it was then that his parents were given the devastating news that his Leukemia had returned for a second time – in over 90% of his marrow. Chance of long term remission was slim-to-none and he was unable to achieve a 3rd remission.

On October 18, 2013 Keian was transferred to Canuck Place Children’s Hospice for end of life care. On January 1st, 2014, Keian passed away in the loving arms of his parents.

Keian found the silver lining in every cloud, always. He faced his challenges with bravery and encompassed wisdom far beyond his years. He rarely complained; whether pain, hair loss or the many adversities children with a cancer diagnosis face. Despite his own battle, he continued to show concern for other families and children suffering with his same disease.

With the help of a family friend, his dream of giving began; Keian delivered hundreds of donated toys to the children of BC Children’s Hospital and Canuck Place in time for Christmas two years in a row. The reason? He said he was lucky enough to be home for Christmas, whereas other kids had to stay in the hospital. That is Keian; selfless, caring and brave. He talked about helping others throughout his treatment, and many got to experience that first hand. He handed out thank you cookies to hospital staff, thanked Jesus nightly for helping him to “get better”, brought candy canes and stuffed animals to other children staying in the hospital and blessed many with his gestures of love.

Last year, over 1500 toys were donated to BC Children’s Hospital and Canuck Place Children’s Hospice. This year the 4th annual Keian’s Holiday Wish Toy Drive is already underway and will be collecting new, unwrapped toys until December 11.

If you would like to help with Keian’s wish, you may do so by donating a toy, goods/services or monetary donations. You may drop toys to the posted drop off locations below. Please contact [email protected] if you would like further information. 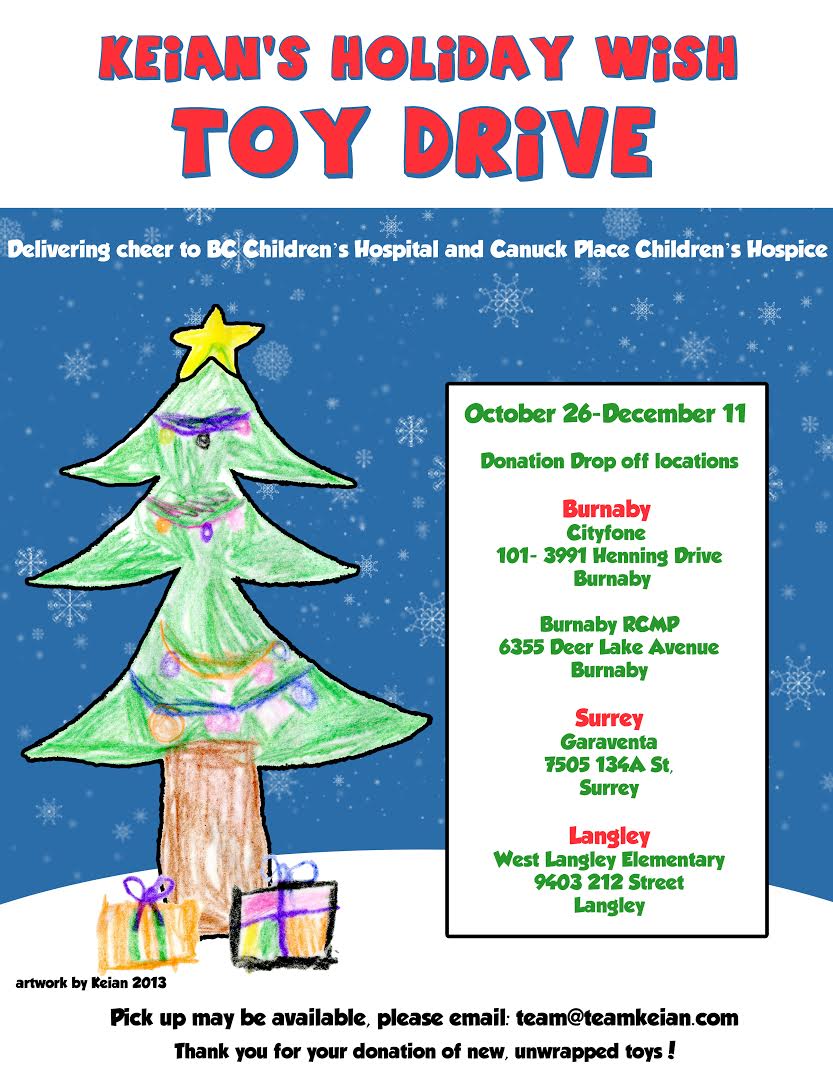