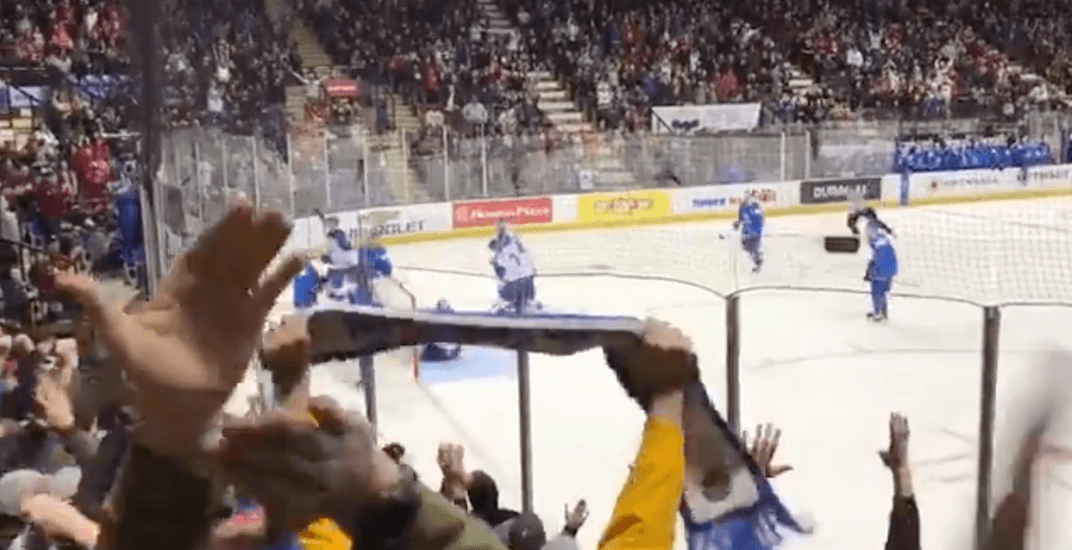 Team Canada may be playing every one of their games at the 2019 IIHF World Junior Championship in Vancouver, but Victoria has adopted a home team of their own.

An underdog country from the other side of the world has won the hearts of Vancouver Island hockey fans, as Kazakhstan is getting unprecedented support in this tournament.

Fans at the Save-On-Foods Memorial Centre began chanting “Kazakhstan” beginning in their first game against Finland. On Sunday night, those in attendance took it another step further.

Losing 8-0 to Slovakia, Artur Gatiyatov got Kazakhstan on the board midway through the second period.

And the fans in Victoria erupted.

Slovakia earns an 11-2 win over Kazakhstan for their first 2019 WJC victory. But the real winners here today were the people of Victoria. pic.twitter.com/m4dzdzbn10

Kazakhstan’s goal song, which the team chose itself, is Sweet Caroline.

With everyone already on their feet and celebrating, you bet the fans sang along.

“I like that song,” said Gatiyatov, who scored both of Kazkahstan’s goals in the 11-2 loss. “It feels very good when a crowd of nearly 6,000 people is supporting you and cheering for you when you score. It’s something special in that moment.”

Possibly my favourite part of this whole World Juniors experience has been welcoming team Kazakhstan to the tournament, and seeing Victoria embrace them as it’s own “home team”. I don’t know if anyone knew anything about Kazakhstan coming in to the tournament, but knowing they would be serious underdogs, Victoria decided to get behind them. Every time Kazakhstan scored, the place would go nuts! It’s a special moment every time. Check it out! #WJC #Kazakhstan @kazakhstanhockey @yeremeyev_hg

Kazakhstan, a former Soviet country of 18 million people in central Asia, is the most inexperienced team at the World Juniors. They’ve lost all three of their games, being outscored 24-4 in the process, but just qualifying for the tournament was a massive accomplishment for the Kazakhs. They had to win the Division I A tournament last year to get in, beating out the likes of Latvia, Germany, and France to get promoted to the World Juniors for the first time in 10 years.

The lovable underdogs have their work cut out for them in their final preliminary round game on Monday against the top team in Group B, Sweden.

From there, Kazakhstan will play a best-of-three series against the last place team from Group A – likely Denmark. The winner keeps their place in the tournament, while the loser will be relegated.

No matter what the end result, fans in Victoria have ensured that the kids from Kazakhstan have had a memorable experience.