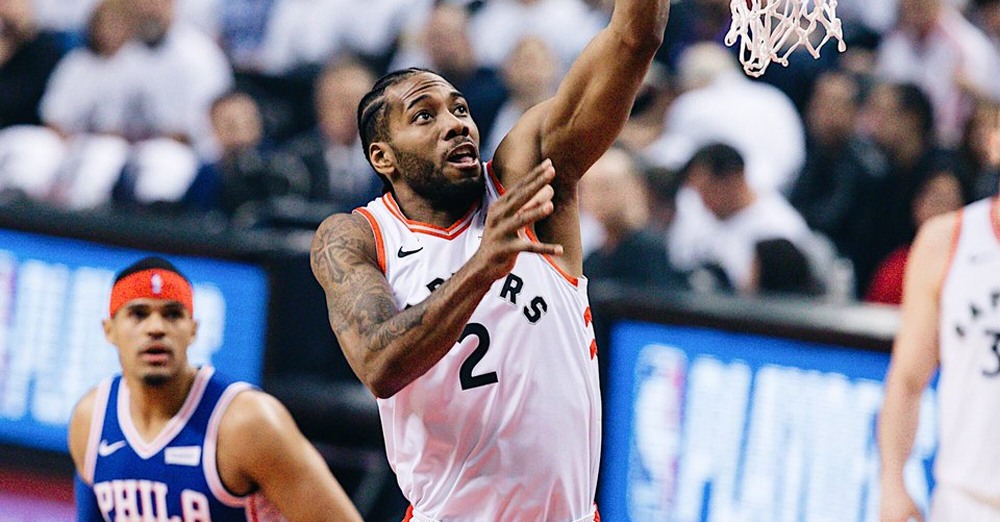 The last time the Toronto Raptors and Philadelphia 76ers met in the NBA playoffs, the world was a much different place. When the two teams met during the 2001 Eastern Conference Semi-Finals, the biggest names on the floor were Vince Carter and Allen Iverson.

This time around, 18 years later, the marquee players are Kawhi Leonard and Joel Embiid. In fact, Leonard may have elevated himself into the conversation as one of the Raptors’ most dominant playoff performers ever.

Kawhi shows off the handles and finishes at the rim! #WeTheNorth | #NBAPlayoffs pic.twitter.com/bzSsmS85sn

Leonard was 16 for 23 in field goal attempts, shooting 68.9 percent and going 3 for 7 from the three-point line. By the way, Leonard himself remains undefeated against the Philadelphia 76ers in his career, improving to 14-0.

Pascal Siakam turned in yet another impressive performance, picking up 29 points and shooting 12 for 15 and making a trio of three-pointers. Leonard and Siakam combined to turn in 74 points.

This was mostly the Raptors’ game from start to finish as they chipped away at a 76ers 5-point lead early in the first quarter and then never looked back. Thanks to Leonard and Siakam, the Raps had their foot on the gas the rest of the game.

In the final six minutes of the fourth quarter, Serge Ibaka came up with two big blocks.

The Raptors found a way to keep Embiid at bay, holding him to 16 points in Game 1, the fewest points in a playoff game for him this season. As a team, the 76ers shot a mere 39.3% from the field while the Raptors shot 51.9%.

Overall, the Raptors improve to 3-14 lifetime in Game 1’s of playoff series. Prior to tonight, they had lost 11 of their last 12 Game 1’s dating back to 2002. The other two Game 1 victories were last year’s opening round series versus the Washington Wizards and the aforementioned 2001 Conference Semi-Finals versus the 76ers.