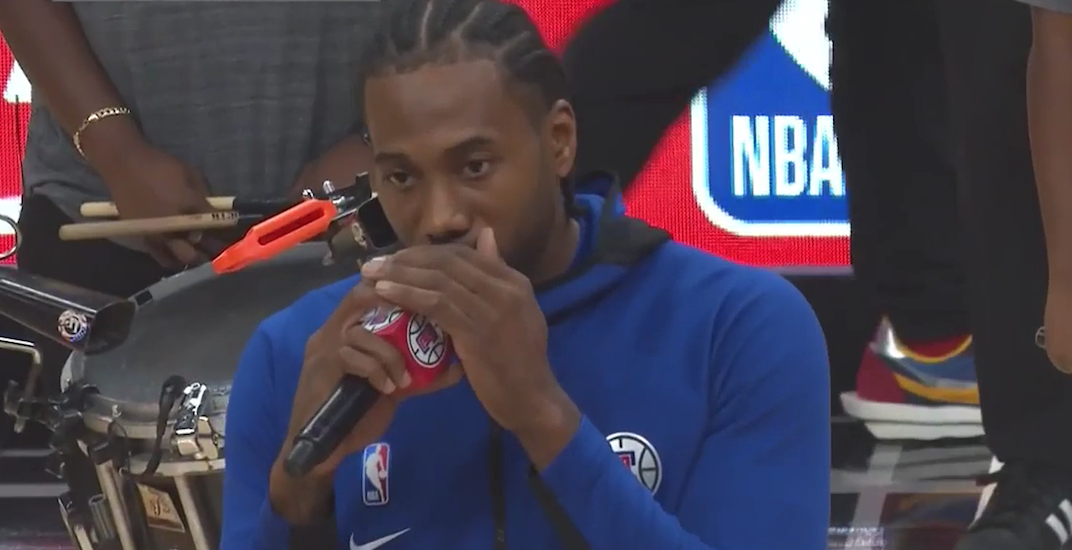 Despite leaving Toronto after leading the Raptors to their first-ever championship title, Kawhi Leonard is still beloved north of the border.

He was treated to a warm welcome during a preseason game in Vancouver last week, and will undoubtedly be given a standing ovation when he returns to Toronto in December.

We wish we could say the same thing about Los Angeles.

While attending an LA Rams NFL game last month, Kawhi was booed by football fans when he was shown on the big screen.

Kawhi just got booed. Damn. The Lakers-Clippers rivalry is gunna be lit pic.twitter.com/vq4FFl1WMn

Kawhi was booed mercilessly to begin the game in his home debut Tuesday night. It’s a sight not often seen, but one we maybe shouldn’t be surprised by given the “visitors” were the LA Lakers — a team the Clippers share Staples Center with.

Naturally, Clippers fans love Kawhi, but LA is obviously still a Lakers town. Not only is Leonard a member of the Clippers, but as far as Lakers fans are concerned, he chose the wrong LA team in free agency.

So we had an unusual scene, with the NBA Finals MVP getting booed in his home court debut…

Substantial boos for Kawhi as he was introduced (he was later booed more as he addressed the crowd) pic.twitter.com/Nc5kwPyqGx

Grabbing the microphone prior to tip off, Kawhi addressed the fans in attendance.

“Welcome Clipper fans to the game tonight,” Kawhi said, leaning into the microphone as Lakers fans tried to drown him out with boos. “It’s going to be a great season. We’re going to work hard every night. Let’s get it going.”

The booing spilled over into the game, as Lakers fans let him hear it at the free throw line early on.

Kawhi gets booed in his own building at the FT line and Lebron gets MVP chants at the FT line….LA show down pic.twitter.com/Y8NUYcLWXn

The boos died down as the game went on, in part because of how the game played out. Kawhi’s Clippers defeated LeBron’s Lakers, with Leonard scoring a game-high 30 points in the 112-102 victory. The game’s second-highest scorer was also a former Raptors player, as Danny Green scored 28 points in his first game with the Lakers.