88 isn’t going to go down in cinematic history as a great film but it does give us another chance to watch Vancouver’s Katharine Isabelle exercise her acting chops, within the dark and violent independent cult cinema where she has found a home.

Vancouver has produced some fantastic child actors but sometimes as the children get older the roles dry up or the passion for the craft fizzles out. Luckily, Katharine Isabelle grew up, survived the cut-throat industry and is starting to produce some of her best work. I asked her what it was like to grow up as a working actor.

I was born into the “filmy life.” We’re like carnies. Always on the move, always doing something totally strange. Can’t sit still. Always looking for where you’re rolling to next. Living in a circus. It’s the weirdest life you could imagine and I couldn’t imagine it any other way. Carnie or die.

Films like the Ginger Snaps series, American Mary, Torment, haven’t necessarily provided light-hearted rom-com roles for the actor, but instead it’s been a consistent career of blood splatter and brain matter that has kept this Vancouverite employed and seemingly happy.

Once people associate you with that kind of stronger, darker, grittier role, they will bring them to you more often. Of course I’m drawn to them as well so it works out. I’ve always liked the slighter darker or edgier characters, they seem more real and multi-faceted, more complex like real human beings are rather than your average sweet girl next door character – which they never really seem to hire me for anyway haha.

In 88, Katharine plays both sweet girl next door (a stripper with a dark past but sweet disposition) and homicidal maniac all rolled into one character. 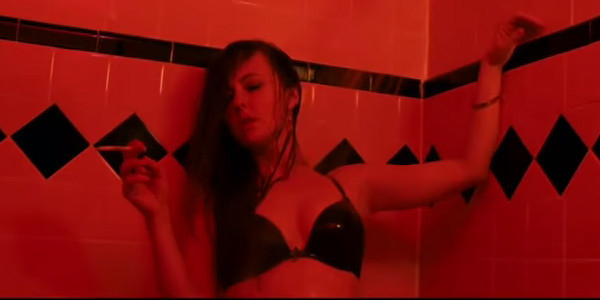 The film plays out like Christopher Nolan’s Memento with a touch of Tarantino’s Kill Bill. Our main character, Gwen, witnesses the traumatic death of her boyfriend which plunges her into deep emotional turmoil where she snaps and enters what is called a Fugu State (google it, it’s a real condition). Gwen develops amnesia and a new “winning personality” as an ass-kicking, gun-wielding psychopath named Flamingo.

Canadian director April Mullen (Dead Before Dawn 3D) puts the pieces of the story together through flashbacks, all while we watch Flamingo go on a unholy rampage of revenge. The clues start to come together and things begin making more sense for the viewer as the amnesia starts to slowly wear off and the story hops back and forth through time.

There are definite tinges of Tarantino and Lynch influences throughout this neo-noir grindhouse flick, but Mullen puts her own touch on a story where it feels like we go from business time to leisure time for exactly eighty-eight minutes of heartbreak and gun fights. For Katharine, working with the Ontario director was a complete pleasure.

April was a trip. She and I knew exactly what we wanted and we knew exactly how to communicate with each other right away. She knows what she’s doing and she manages to inspire everyone around her to really achieve the end result that she so clearly lays out to us. We get along like a house on fire.

For all of 88‘s shortcomings, and the stuffy reviewers will make sure to point them out, it’s the performance of the 33-year-old Vancouver vixen that will keep viewers hypnotized. Through all of the stylized blood-soaked violence, you need your star to keep people interested and Katharine’s split personality as Gwen and Flamingo does exactly that.

However, it was seeing Christopher Lloyd, A.K.A Dr. Emmett Brown from the Back to the Future trilogy, playing a creepy and grotesque character named Cyrus that will have you reeling.

How we go from “Great Scott!” to snorting coke off a stripper’s tit is beyond me but bravo to Mr. Lloyd for taking a chance and playing. Having an opportunity to work with the iconic star isn’t something Katharine took for granted.

Mr. Lloyd was an absolute dream come true to work with. Anyone of my generation holds him in a dear place in our hearts and to see him be so badass, he’s just awesome, and still you can’t help but love him.

88 was written by Tim Doiron, who also plays the role of another kill-frenzy maniac named Ty trying to help Flamingo on her quest for answers and dead bodies.

This film has some real potential, but the constant jumping back and forth sometimes had you scratching your head and wondering what was going on. It’s not difficult to keep up but you need to pay attention.

By the time we got to the third act it was apparent in how the film was going to end. It ceases to be a twist ending when you go with the predictable choice. It would have been better if the story didn’t go with the tired and played out finale, but instead, made you believe it was going to go in that direction and swerve into something even more unpredictable.

The film is very stylized and you can safely put this one on your television for some late night viewing pleasure, but if it wasn’t for Isabelle’s performance, 88 would have fallen flat. 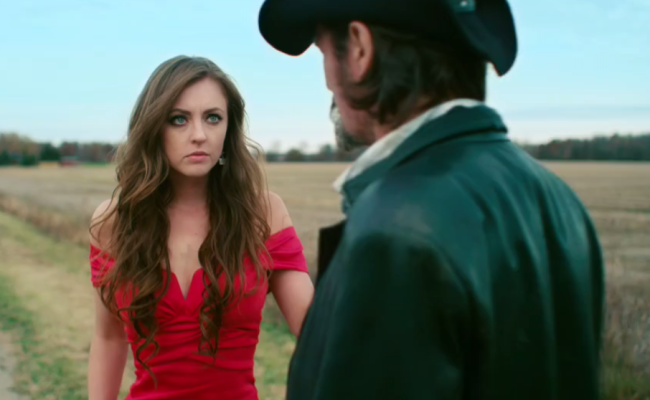 The girl from the “carnie” film business family has developed a cult following and she’s always a pleasure to watch on screen. So if you’re a fan of the Canadian scream queen, you’ll enjoy 88 because it’s one of her best performances. That said, something tells me there are many more “best performances” coming as Katharine continues to carve out her bloody niche.

I give 88 2.5 rain drops out of five. It’s a fun film and for all of it’s faults it’s a solid calling card for Canadian director April Mullen.

You can currently see 88 at select Landmark theatres and VOD. Major thanks to Katharine for taking the time to chat. Give her a follow on Twitter to see what kind of future shenanigans she’ll be up to.