Legendary Vancouver Japanese restaurant Kamei Royale is giving up their Georgia and Burrard location, and will move into new digs in Coal Harbour in Spring 2016.

Kamei Royale, which is part of the Kamei group of restaurants (their sister restaurant Ebisu has three locations), is part of a local history in dining out that dates back to the early 1970s. Their claim to fame was introducing the “BC Roll” and other now-standard sushi dishes to the local lexicon.

According to Shingo Masuda of Kamei Group, Kamei Royale will remain open at their current location until December 12. 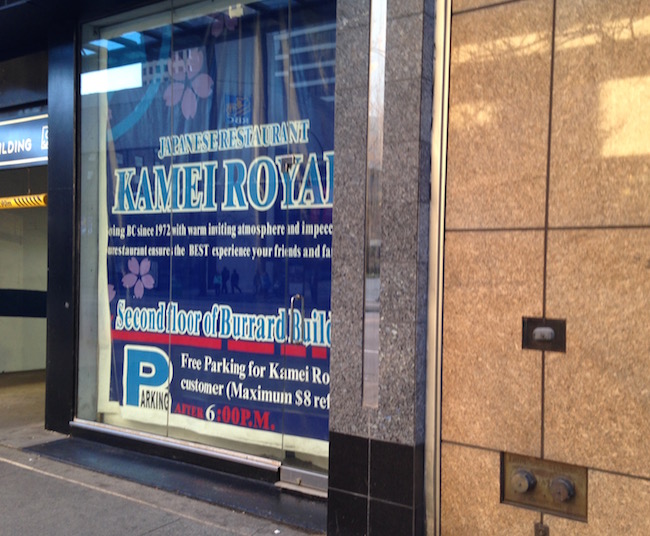 With a renovation in 1990, Kamei Royale kept itself relevant on the local Japanese dining scene, and has remained a favourite for visitors and locals alike.

Their new location will be at 1066 West Hastings, in a deal closed by Mario Negris and Martin Moriarty of CBRE’s Urban Retail Team, and Kamei Royale promises they’ll be “coming back with superior menu and service.”

Masuda told Vancity Buzz that Kamei Royale is going to take their restaurant to the next level by bringing on a new chef directly from Japan, and that the menu will be “a combination of fusion and traditional,” cuisine, drawing of course from their “50 years of business in B.C. and 100 years of experience from Tsukiji Japan.”

Kamei Royale will continue to offer their renown sake list, and wide variety of seafood. “Our new restaurant is aimed to be the best Japanese restaurant yet in Vancouver,” adds Masuda.