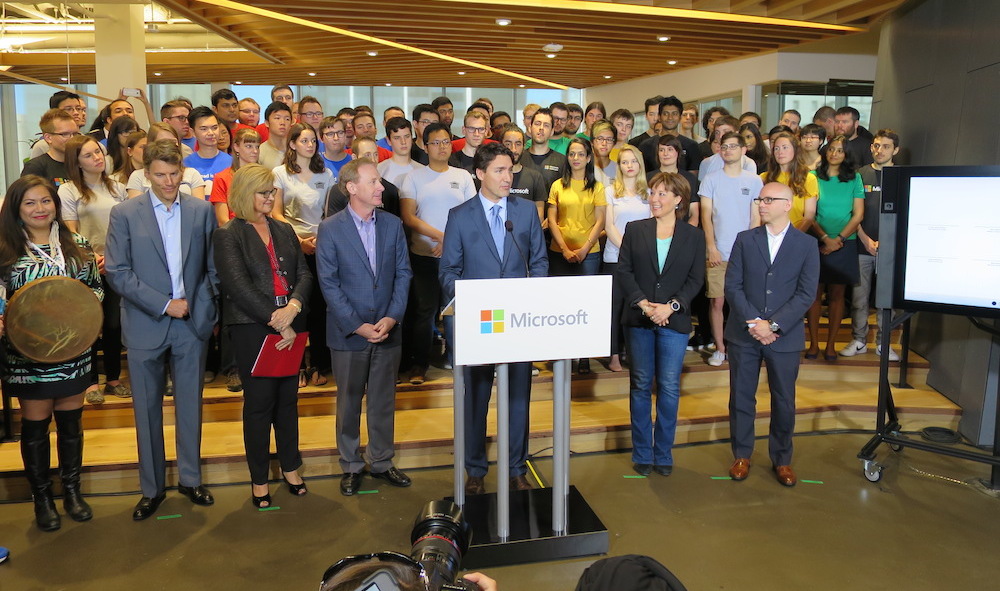 The 142,000-square-foot office and development space occupies the entirety of the top two floor plates of Pacific Centre’s Nordstrom building at 725 Granville Street. Two large atriums in the centre of the building and floor-to-ceiling windows wrap the floors, allowing natural light to pour in and provide panoramic views of the city and mountains.

A separate atrium with a grand staircase connects the two Microsoft floors together, and the space incorporates wood and other earthly tones extensively. Developers and interns work in open and closed collaboration spaces with plenty of breathing room, including two large multi-purpose community rooms.

“To call it impressive would be an understatement,” said Trudeau during a press conference. “For a geek like me, it was an absolute thrill to see in action the technology that Microsoft has developed. Tools that make the world more accessible for people with visual impairments that help support students with learning disabilities among other applications.”

“I want the global business community to know that now is the time to invest in Canada. If you’re looking for a sound business climate, if you want to hire diverse and hard-working talent, if you’re seeking a partner that values and champions innovation, Canada is the place for you.”

According to Brad Smith, President of Microsoft, the company invested over $100 million on building the new facility and is “committed to Vancouver”. Microsoft plans to double its Vancouver workforce size from 300 employees to 750 employees from across Canada and elsewhere in the world.

On an annual basis, the new innovation hub is expected to create $90 million in direct investment in Vancouver and an economic impact of $180 million province-wide. It is the development centre for: apps like Skype, OneNote, MSN; interactive television apps such as NFL for Xbox and Windows 10; mixed-reality smartglass Microsoft HoloLens; ground-breaking accessibility program Seeing AI for the visually impaired; and video gaming products, namely Gears of War – the biggest game for Xbox

“We are better because we have people from around the world that join us here,” said Premier Christy Clark, who also half-jokingly stated that the company needs to move its Canadian headquarters from Mississauga to Vancouver.

“Microsoft is such a fantastic example of how when people come from around the world, they can create more jobs for British Columbians and Canadians. They can transfer that talent and knowledge and it stays here and enriches us. Our biggest resource… is people.”

The tech sector in Vancouver is worth billions and employs 75,000 people. Another 15,000 people are expected to work in tech over the coming three years.

Microsoft still retains its office space in Yaletown near B.C. Place Stadium to house developers for other projects. Its new Centre for Excellence at Pacific Centre sits on top of Sony Pictures Imageworks’ new global headquarters and Miller Thomson LLP, one of Vancouver’s largest law firms.

For photos of the Microsoft Canada Centre for Excellence, click here.