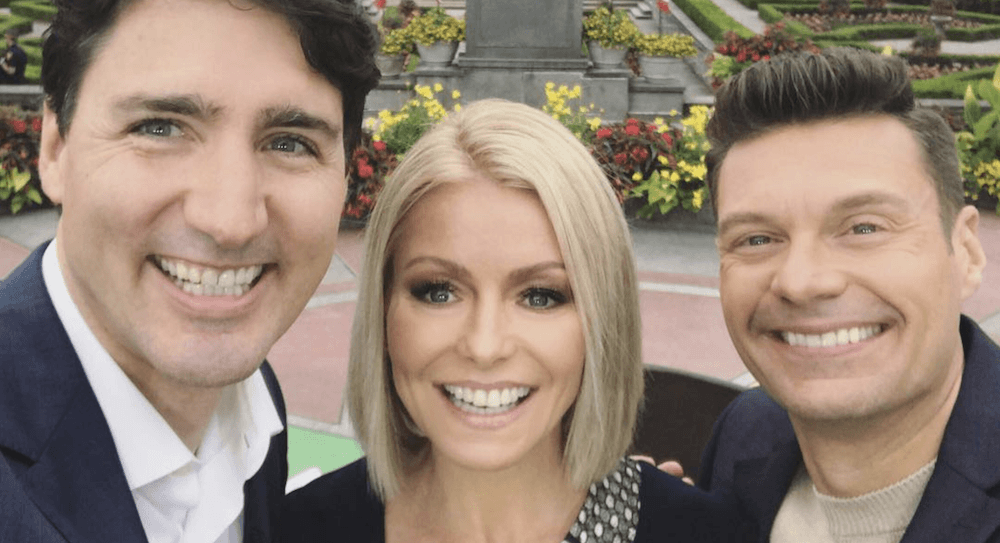 Niagara Falls’ Oakes Garden Theatre sounded like a pop concert on Monday morning, but the star of the show was a politician.

Screams and applause filled the cold, open air as US television show “Live with Kelly and Ryan” hosted an outdoor program with guest Justin Trudeau.

Opening the conversation with the Prime Minister’s sex appeal, Kelly Ripa asked Trudeau how his wife Sophie Grégoire felt about him being “the sexiest politician alive.”

“My wife doesn’t believe it. She knows what I look like when I get up in the morning,” Trudeau said, saying he’s a little “messier.”

But that didn’t stop Ryan Seacrest from asking about Trudeau’s many shirtless photos.

“It’s funny because as I was talking to Canadians who’ve been in town and knew you were coming on they kept asking me was I going to take off my shirt and I said, ‘absolutely not.’ But they said this is something you’ve been caught doing once in a while,” Seacrest said.

As Trudeau began to answer, the Niagara crowd laughed and screamed.

“Well, if I’m out on a hot day minding my own business with my family, I have been known to wear a bathing suit from time to time,” he said, to which Ripa responded, “It’s hot right now, don’t you think?”

Sexiness aside, Trudeau was asked about his father Pierre Trudeau, and growing up as a Prime Minister’s son.

Trudeau said that the experience allowed him to travel across the country, and around the world for the first 13 years of his life.

He said he took a completely different path growing up, and found “an honest place” that “wasn’t a sense of duty” before choosing the political path.

The politics of US and Canada was a topic of discussion during the live interview, and Trudeau said the relationship between the two countries is “unbelievably deep.”

When describing his relationship with current President Donald Trump, Trudeau said “we have a good constructive working relationship” but added that they don’t agree on some topics, such as the environment.

Trudeau’s interview was a mix of light politics and personal questions, which allowed Ripa to bring up the Prime Minister’s famous Star Wars socks.

“I much prefer jeans and a t-shirt, but now that I’m the Prime Minister, they make me dress up with my suit and tie all the time,” Trudeau said, laughing. “But the socks are the one way that I can sort of express myself a little bit.”

Meaning, expect more colourful socks surprises in the near future.