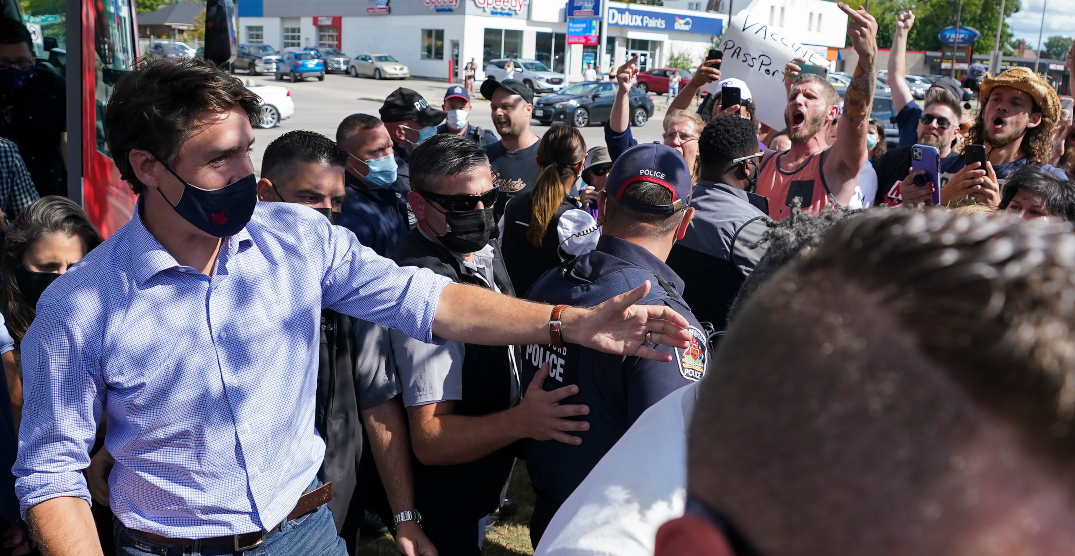 Campaign events need to adjust to protect people who attend them, Liberal Leader Justin Trudeau said the day after gravel was thrown at him following an Ontario whistle-stop campaign event attended by angry protesters.

But the Liberal leader remarked Tuesday that Canadians should be proud that politicians can walk down the street without fear of being attacked like they might in the United States.

He compared Monday’s incident to the January 6 riot at the US Capitol building and said Canada should not let such polarization take over.

“As we see little pockets of people lashing out in ways that remind us of horrific events like the storming of the Capitol, Canadians need to know that their leaders, that their country is standing firm to not let that happen,” Trudeau said in Montreal on Tuesday.

“Yes, we need to adjust, we need to make sure we’re keeping people safe, but we need to not accept that further distancing between people and the people who want to represent them is inevitable or desirable.”

He made the comments after a day of campaigning that was dogged by increasingly agitated protesters in southern Ontario. People there expressed anger at pandemic measures and COVID-19 vaccines and some shouted slurs and threats at Trudeau, his supporters and the media.

Someone threw gravel at Trudeau after a Monday evening event at a London, Ontario, brewery, as the leader was boarding his campaign bus flanked by dozens of protesters on either side. Trudeau and others were hit with the debris.

Trudeau’s political opponents in the federal race condemned the assault on Tuesday.

But the leader faced questions the day after the attack about whether it’s safe to keep holding public campaign stops in sites that can be easily swarmed by unpredictable and aggressive people unhappy with his leadership.

Trudeau didn’t directly answer when asked if his recent stops, where unmasked protesters were able to come within feet of the leader and others, had been held against the advice of his protective detail.

He said he would cancel an event if advised to do so by the RCMP — a situation that played out in Bolton, Ontario, on August 27 — but argued that stopping political events is a goal of the protesters and he does not intend to give in.

“They want to make their shouting and their aggression override democratic processes that have been going on for generations in this country and in other democracies around the world,” he said. “We will not let them win.”

The RCMP was not immediately available for comment on Tuesday.

The volatile nature of the recent protests would appear to make safety planning challenging.

In London on Monday, only a few protesters were on site when Trudeau’s campaign bus arrived. The crowd had ballooned by dozens more people, many of them carrying People’s Party of Canada signs and gear, by the time he departed less than an hour later.

A similar scene had played out at a Brantford, Ontario, restaurant Trudeau visited hours earlier on Monday. People stood at the edge of the sidewalk booing, shouting and cursing as he walked on and off the bus with his team and candidates. Protesters at both Monday events tried to move into the road to block the bus from driving away.

Trudeau’s stop in Montreal on Tuesday was held at a more isolated location and did not attract the same type of crowd. The leader also had fewer public events scheduled for the day.

He noted in the morning that political signs from People’s Party of Canada have been popping up in greater numbers at his events.

“We haven’t seen organized political opportunism, like unfortunately, we’re seeing with the PPC signs that have suddenly now appeared over the past couple of days,” he said.

“I will leave it to pundits and analysts to opine on what sort of strategy the People’s Party of Canada is engaged in, in trying to welcome and support those votes.”

On Monday, volunteers for local PPC candidate Chelsea Hillier — who was also on site — were handing out PPC merchandise to those who assembled.

Hillier, the daughter of Randy Hiller, an anti-lockdown member of provincial parliament in Ontario, said networks of people united by their displeasure with Trudeau had methods of tracking his events.