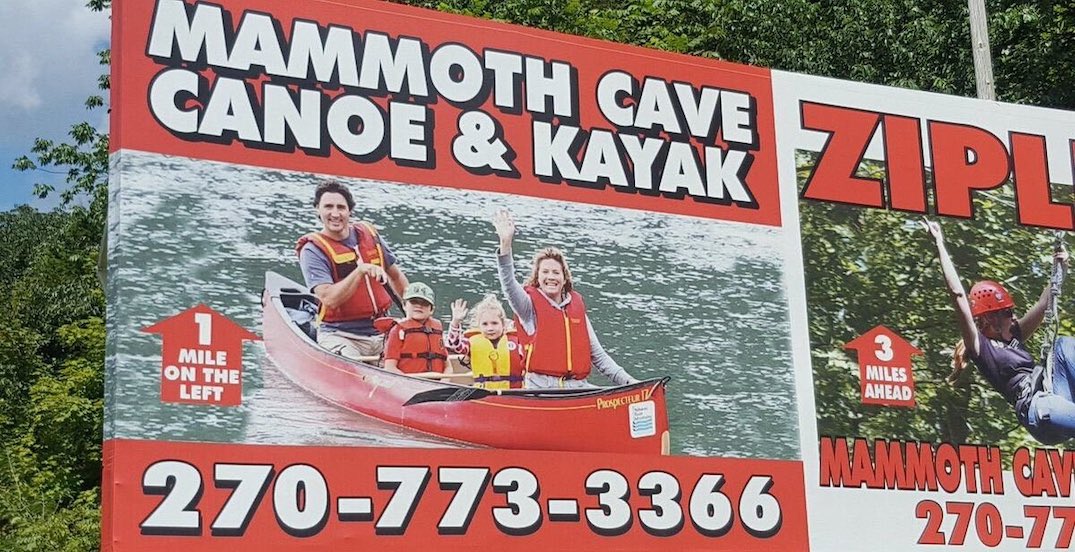 In Canada, we’re used to the Prime Minister leading an outdoor lifestyle. In fact, Trudeau has often been photographed casually kayaking on our waterways — he even kissed a bride during one kayaking trip.

Of course, Trudeau is also a runner, who can sometimes be spotted doing so shirtless (if you’re lucky.)

And Trudeau has clearly been outdoors with his family as well.

Here’s our PM tweeting about a lovely fam canoe trip back in 2013.

Thrilled to let you know we’re going to need another seat in our canoe: Sophie is pregnant! #threeisthenewtwo pic.twitter.com/gm76BwAe4p

It seems, however, that internationally, Trudeau’s family isn’t known as Canadian political royalty.

Case in point, a Kentucky billboard.

A post blowing up on Reddit Canada shows a photo allegedly taken in Kentucky, advertising for Canoe and Kayak adventure (which we know JT is a fan of now), with that photo of the PM and his family on it.

The exact 2013 photo of Trudeau has a “1 mile on the left” note on it, with the number of an adventure company in Kentucky.

Did you ever hear about our Trudeau billboard down here in Kentucky. We haven’t quite learned not to steal pictures from the Internet yet. pic.twitter.com/DW7SLDOxef

Rest assured, that is a photo of Trudeau and not his Afghan lookalike.

No word on whether the PM kayaked in Kentucky, or if he knows this billboard existed.

A Kentucky reddit user claims the ad has now been taken down.