JUNO Award-winning group, The Tenors hit the road this week, embarking on their highly anticipated North American Tour. Ahead of the upcoming 70-city trip, we chatted with   Vancouver’s own Clifton Murray to discuss everything from the band’s new album to road trip pranks.

What are you looking forward to most during your North American Tour along with fellow Tenors Victor Micallef, Fraser Walters and Remigio Pereira?

We can’t wait to share the music! We’re taking big, bold steps with this new album and with the new tour. We’re basically trying to reinvent the concept of what a tenor group is. We do rock and roll, we’re dancing, we’re playing instruments, we’re telling stories. It’s kind of like Michael Buble meets Justin Timberlake, with Pavarotti and Bocelli in the mix. Four guys that come from a very unique musical background and allowing that individual light and talent to mold the group. 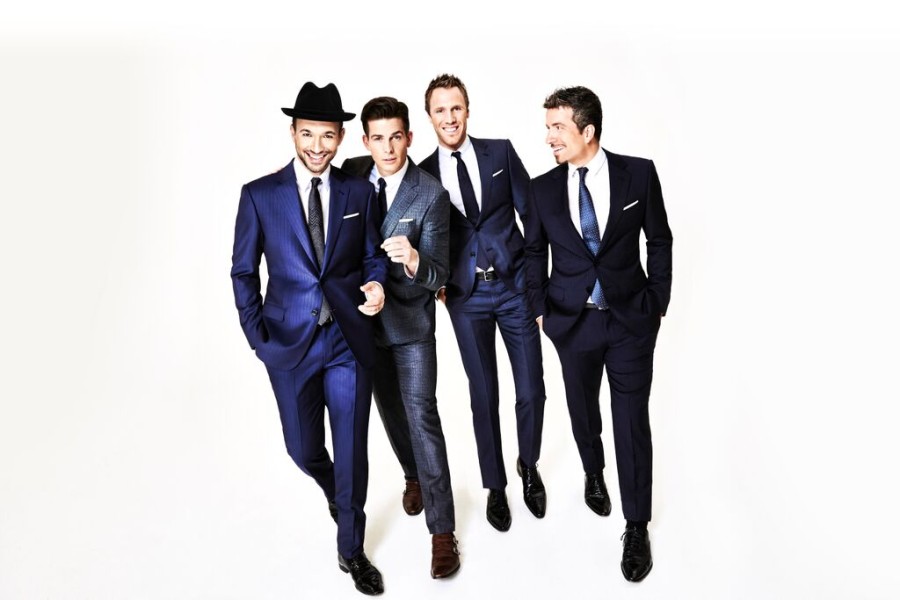 Not only power vocalists, but also songwriters and musicians. This album features eight originals co-written by all of you. What was that experience like?

We’re two opera singers and two pop singers and we’re just allowing that creativity to blossom with this last album. We wrote eight album songs with some of the best writers in the industry from Nashville, LA, New York. The songs that we had written are now the focus tracks on the album.

“Under One Sky” was solely written by the four of you. What was that process like?

That was really an idea to create a sports anthem for the Pan Am Games or the Olympics. It’s really a sports song, written for a stadium. You have people from all over the world coming together to celebrate something that they’ve worked their whole lives towards. As the song started to roll out, it took on a bit of a new shape in the sense that it was more of an anthem for multiculturalism and bringing people together from all walks of life, all religions, under one sky. Reminding people, that there’s a lot of crazy shit going on these days but we need to focus on what makes us similar as opposed to what makes us different. 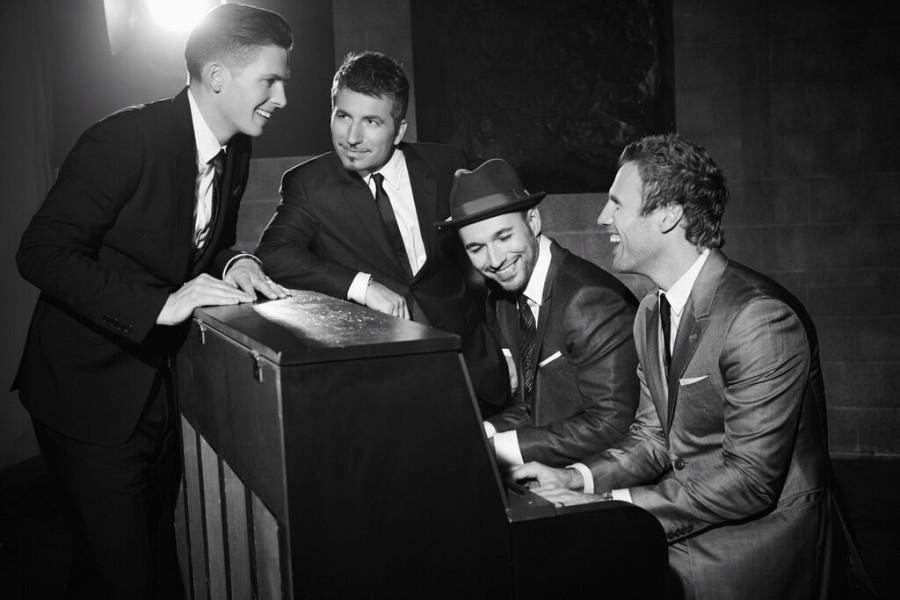 Opening this music video up to the fans, why did you guys decide to do that with this particular song?

For the music video we started creating this video of us going all over the world, recording ourselves in Paris, Florence, Czech Republic, Greece, The U.S., and Canada. We thought, you know let’s make this a total global thing, and lets get our fans involved. We asked them to submit videos in famous monuments around the world, in countries where they are. Thousands of people submitted videos of themselves, in all parts of the world, putting one finger to the sky, unanimously saying “we are all under one sky.” It’s our way to give back and say thank you. 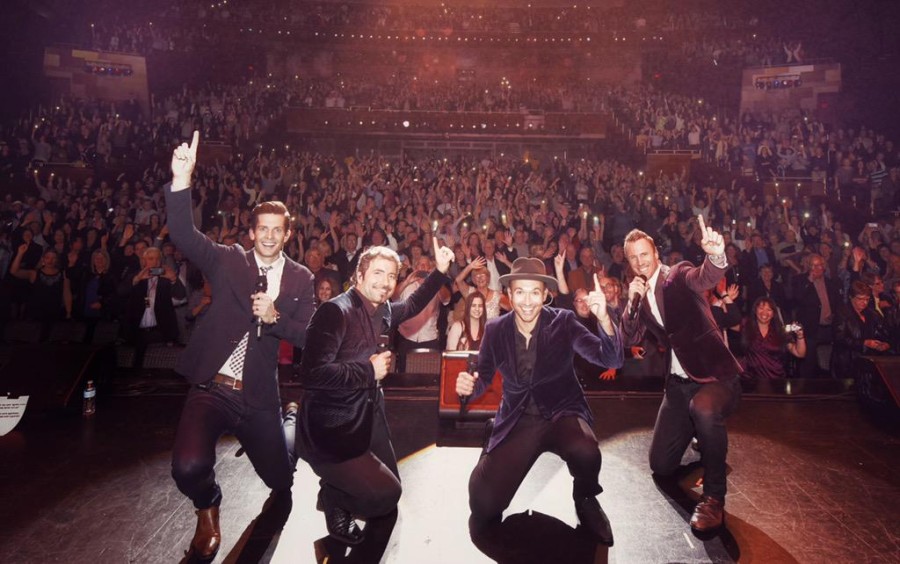 The concert DVD Under One Sky was just released. What can we expect to see?

The concert DVD has 14 songs from our “Under One Sky” album. We do a few solos in there that you can’t find on the album and also one group song that’s not on the album. It’s really a representation of the new music and also the tour that we’re on right now.

What do you love most about performing your original songs live?

We try to make it the most entertaining and cathartic as possible, to connect on a really deep and emotional level, whether it’s getting them up dancing, singing and clapping along or having people feel those emotions so that they keep coming back for more. There’s a lot of stress in the world, there’s a lot of anxiety in personal relationships and when you come to a Tenors show, we want people to really feel those emotions, let go and release. 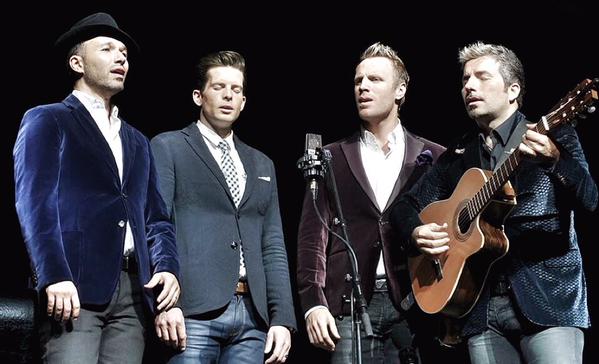 What’s your favourite part about touring?

My favourite part is being on stage and finding that moment where you are completely out of the way of the music and the song is singing itself. It’s almost like an outer body experience and you look out and the audience is totally connecting, totally vibin’, maybe their singing with the lyrics or their connected in their eyes and you’re just sort of taking it in, almost observing what’s going on. It’s a magical moment as an artist and it doesn’t happen all the time but those are the moments that I live for.

What are some of your standout songs on the album?

I think this is our best album we’ve ever done and there is a lot of strong songs on this album. That’s why it takes so long for us to do an album, a year and a half because we don’t want there to be any filler songs. Every song has to be powerful, passionate and really mean something when you hear it.

“Angels Calling” has become a standout track. It comes from the perspective (this is a co-writer of ours) of a grandmother who’s on her death bed, she’s in a coma and she can’t speak. She knows she’s going to heaven and she is looking for the words to give to her loved ones to let them know that everything is going to be ok. It has connected in such a powerful way; we get letters, emails, posts of people already playing this at funerals. When people come up to you with tears running down their face saying that this song is bringing them comfort, I can’t even put in to words how powerful that is to be a vessel of that kind of healing.

“My Father’s Son” is another one that we wrote about our fathers. You get so many songs about moms for obvious reasons and this one is really about how we realize that we are each our father’s son. No matter the relationship with your father (talking generally now), you’re always going to be your father’s son. It’s that understanding of the legacy that they carry on in their children.

For me personally I love “Worlds Collide” and it’s about an interracial relationship and we come from totally different worlds but we seem to make it work. And it’s about two opposites coming together to make something beautiful. When worlds collide is really the concept and it’s an analogy of two planets colliding in the stars and the sky.

You’ve had the opportunity to work with some amazing artists and producers on this album. What do you think the most rewarding piece of advice was that you received?

There was a great line from David Foster that I picked up from him and he said, “good is the enemy of great.” And that stuck with me because when you’re trying to create something that you want to last forever, you’ve gotta ask yourself “is this good or is this great.” With each song on this album we asked that question and we try to be really truthful with ourselves. He demands excellence. We did a song with him on this album and we’re really proud of our relationship with Foster. He’s got 17 Grammys for a reason.

You’ll be back on the West Coast in December. What can we expect to see?

We always love coming back to Vancouver. We’re doing Abbotsford in this tour. We’ve done the Queen Elizabeth three years in a row and we wanted to do something a little bit different. It literally is going to be completely unexpected for people to see us up there doing a rock section, then we do the campfire scene, and then we do some dancing; it’s all over the map. It’s a big production but we also make sure we get down to the music in a serious way like what we’ve done in the past. I’ve never been so passionate about a tour before.

I imagine it must get very exhausting on tour. Do you try to maintain a balance?

I maintain a balance by just having a really strong relationship at home, a very supportive wife; I just got married a month and three days ago. (Clifton & Rachel’s wedding video). 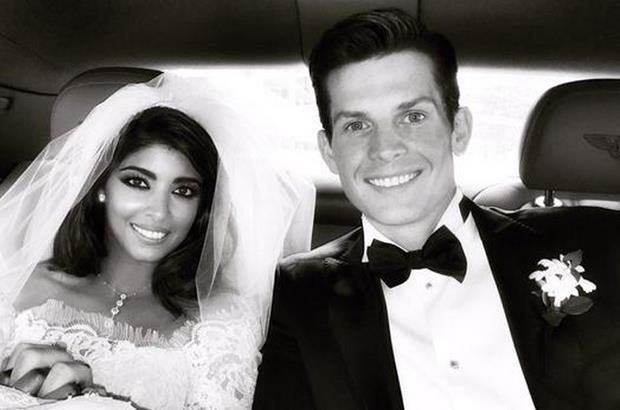 Thank you so much! She’s a local Vancouver girl, Rachel Carvalho. To have that support at home, to have someone that believes in you, is patient with you being away all the time, really does make it a lot easier. To have a support system that’s understanding, that’s in it with you, makes a big difference. But also I’m doing what I love. You know that old adage, “find a job you love and never work a day in your life,” really rings true for me and the guys as well. It’s gruelling, it’s long, it’s hard hours, but I wouldn’t want to do anything else. You just gotta be able to take care of your body. You’ve gotta eat right, drink lots of water; you gotta get a good sleep and other than that you know just keep doing what you’re doing.

Oh it can be crazy man. We’re four alpha males so were very passionate. We all have strong ideas and it can get hot sometimes. We’re very democratic and we’re all four lead solo artists. There’s no one leader in the group. We have a lot of great producers that we work with, Bob Ezrin being one of them, who really believes that to get to something profoundly truthful you need to have that intense debate to really drum up the passion of what you’re really trying to get to.

And if tensions run high, do you play any pranks on each other?

Oh ya, all the time. That’s like half the fun. You know, ball busting, giving each other nicknames, oil spotting guys for fun if they’re late or miss the bus or something. We keep it fresh and we have a lot of fun with it. We’re all jokesters and we love to tease each other. It’s like literally having three brothers with you on the road. What do siblings do, they fight and then they have fun. 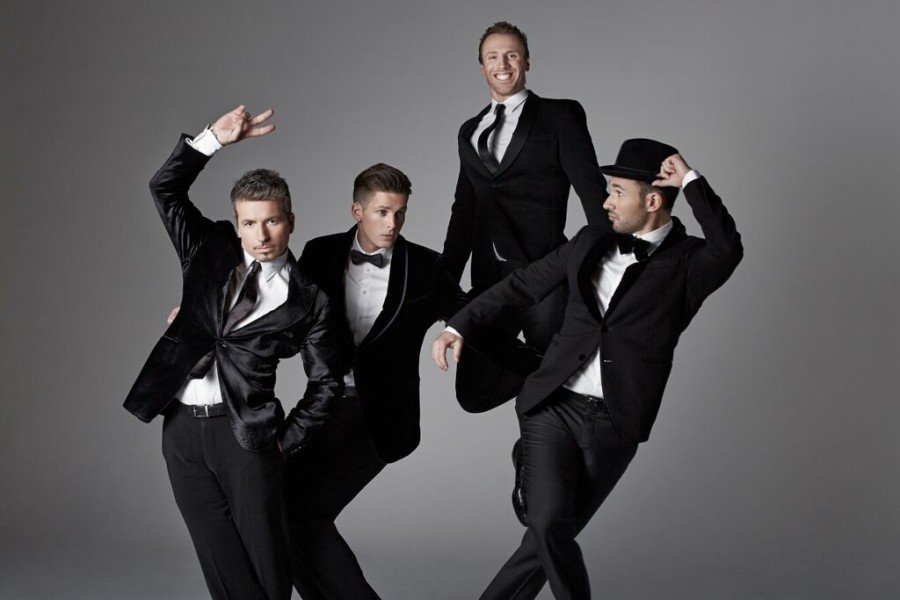 Back in your hometown, what do you have planned while you’re here?

I love being back in Vancouver, proud to be a West Coast, BC boy. I have a lot of family and friends here. And I’ll be opening my wedding presents. We got married on the 29th, the 30th we flew to Hawaii for our 10-day honeymoon and then on the 11th I flew to Toronto to start our tour. So I have not been home yet until today. Rachel was kind enough to wait until I got back so we could open our presents together. We will be in Victoria at the Save On Food’s arena on October 5th for a big show. Come on down, it’s going to be an awesome show.