A beloved piece of Vancouver art is in danger, and it’s up to the city’s generous tippers to save it.

Located in an alley at the corner of Abbott and Pender Street, the Wall of Joy is comprised of photos by Vancouver-based artist Eyoälha Baker, depicting people jumping into the air in freeze frame. Unveiled in 2015 just this past summer, harsh weather is threatening to destroy the work already, something Baker hopes to avoid at all costs.

“It’s starting to fall apart a little faster than I thought it would,” Baker told Vancity Buzz.

To raise funds to fix the mural, Baker has partnered with Save-On-Meats and owner Mark Brand. During the month of December Baker will work as a server at the diner/butcher shop/charitable organization, and all of her tips will go towards repairs. Baker says fixing the mural is the ultimate goal, even if she’s been out of the food service scene for a while. 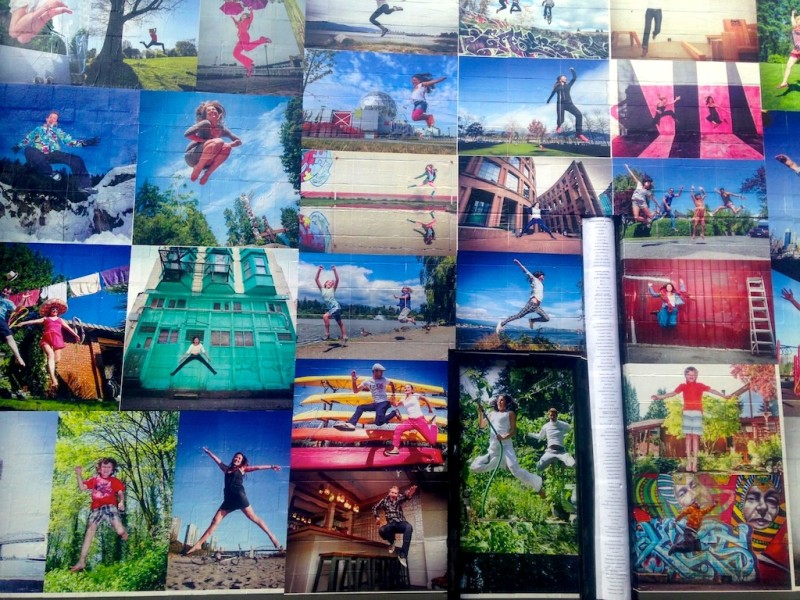 “I haven’t served in probably over two decades, so I’m getting a crash course in being a server,” she says. “It’s been really fun [Mark] has such a great team. It’s really about trying to continue the connection with the community. I love what [Mark] does with the token program, so it’s sort of a win/win for both of us.”

Baker says that one top of preserving a piece of local art, she hopes to maintain Jump for Joy as a way of honouring the people living in Vancouver’s Downtown Eastside.

“I really fell in love with this neighbourhood when I was working on this mural,” she says. “A lot of the people living on the streets are in the mural, or helped me make the mural, so it’s really special to me. Not only me, but to people int he community, it means a lot.”