Come along on my first Juice Cleanse, courtesy of the awesome guys at The Juice Truck.

I’m checking in nightly… Stop by, shoot your questions at me below in the comments, or just leave some words of encouragement! Hoping my account will help those of you interested or on the fence about giving your first juice cleanse a shot.
(Missed Day 2?)

Today was a day of back-to-back meetings with one last one downtown that we fought through traffic to get to, that left me really drained. By the time that one finished up, the last thing I felt like doing was exercise. I have been avoiding high energy activities due to the juice cleanse, but today decided to work out anyway. I opted for a Bar Method class instead of my regular volleyball, as I really didn’t feel like doing something that was going to make me continue “running around.” And it worked! I’ve been feeling fantastic ever since. I realize that as someone who is quite active, sitting around was not doing me much good, which may have explained the crappy mood I was in all week. 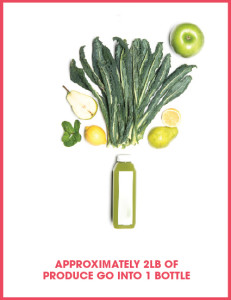 ENERGY: 7/10
This week was a hard one to do a juice cleanse in general, as I’m adding another change to a constantly changing schedule of meetings and competing priorities. I’ve been a bit scatter-brained, and generally low, moody and forgetful. But, although I felt like I was always doing three things at once today (scratch that, four – I’m always drinking juice!), I actually had the energy to make it to an exercise class! Which brings me to my positive moment…

POSITIVE MOMENT:
Today is the first day on my juice cleanse I did some exercise, and I was not only totally okay, it was exactly what I needed. The “Protein Milk” juice (and its delicious cinnamon creaminess..!) was the best thing ever to have on hand after, and I felt nourished instantly. Now, I’m sipping on the “Sleep Tonic” – though I find I can’t really get through the whole bottle. (I’ve actually found that this has increasingly become the case for most of the juices, save for the “The Base,” which I just can’t get enough of!)

ROOKIE MISTAKE:
Don’t chug. It’s a meal, so treat it like one. Sip slowly, savour it (I tend to sip a single juice over the course of an entire hour)….and believe it or not, chew! I think it helps physically and psychologically. Otherwise, before you know it, your meal is over and you’re on a sugar high. Plus, chewing produces saliva, which is packed with enzymes that aid digestion.

LAST WORD: Many people are wondering why I chose to do a juice cleanse. And lots of social media comments have been pouring in since my first post – from words of encouragement and simple “likes”, to criticisms of cleanses as a whole and claims that they give you diarrhea, make you lose weight, or starve you. While I’m not here to defend every cleanse on the planet (I’m here to share my experience so you can judge this particular one for yourself), I am happy that I can dispel some myths about cleanses: Cleanses are as safe and comfortable as you make them. And while it’s been tough in some respects (especially as my body adjusted to no caffeine for example), the toughest part has been changing my lifestyle so that I can accommodate such stringent healthy eat(drink)ing (read: I miss the odd night cap, dinners out after work, popcorn for my Mindy Project marathon, a comforting latte during an intense work sesh… the list goes on).