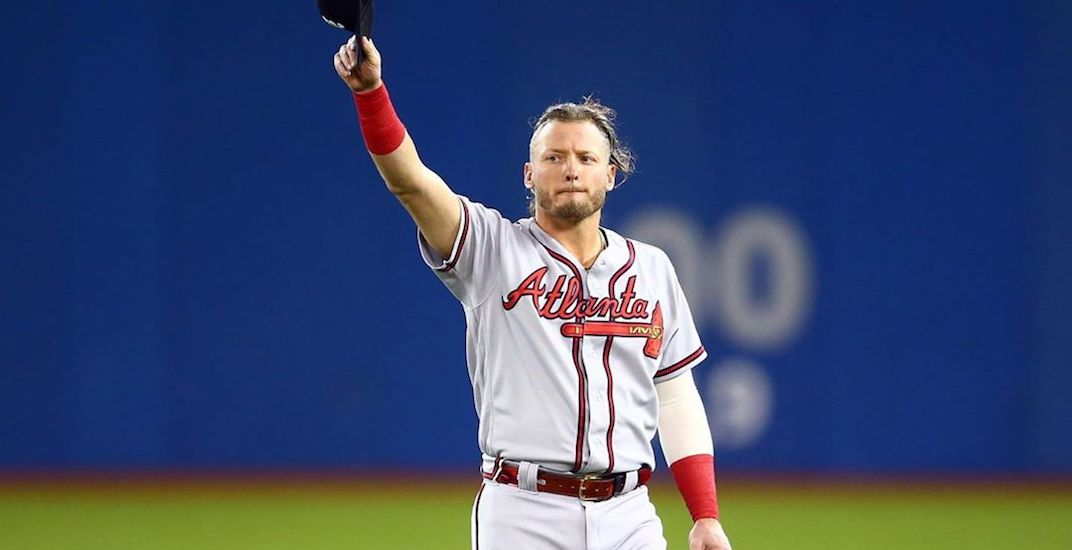 The breakup was messy between Josh Donaldson and the Toronto Blue Jays, but this may have been the first step towards some overdue closure for one of the team’s most impactful players.

Donaldson took to the field in Toronto for the first time since being traded by the Blue Jays last August. He received a hero’s welcome from adoring Blue Jays fans as the team unveiled this video tribute to the “Bringer of Rain.”

Thank you for bringing the rain, JD!

Donaldson tipped his cap and then saluted the home fans during his very first at bat in the bottom of the second inning. The Rogers Centre crowd provided thunderous applause for the former American League MVP.

Tip of the cap to @BlueJays fans for this warm welcome for @BringerOfRain20 👏👏👏 pic.twitter.com/wflX59amyU

The Braves’ third baseman had an opportunity to play hero for his team in the top of the seventh inning with the bases loaded and his team trailing by one run. It’s a situation all too familiar for the veteran infielder, but he popped out and ended the Braves’ threat.

The Blue Jays secured a 3-1 victory over the Braves, but in the process, Toronto extended an olive branch of sorts to Donaldson, who appreciated the gesture.

Josh Donaldson on his night back in Toronto

“How things ended (with #BlueJays), today was a nice step in the right direction, I feel like. For me. Mentally, emotionally, being back here.”

The Blue Jays and Braves conclude their brief two-game Interleague series on Wednesday at Rogers Centre, where Donaldson will get one last chance to say goodbye to his former Blue Jays fans.