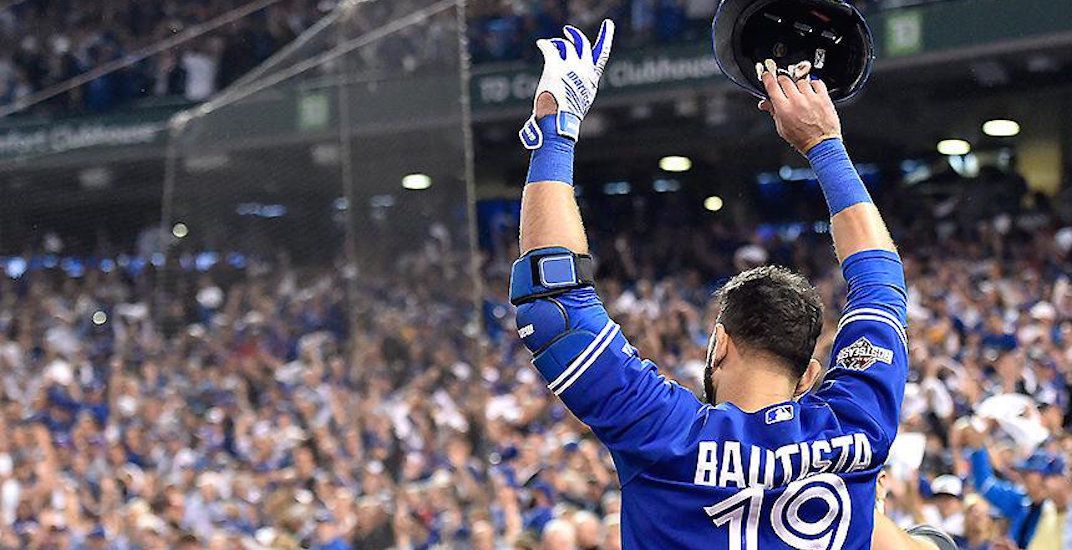 This looks like Joey Bats’ swan song in Toronto.

As the Blue Jays play their final homestand of the 2017 season, this will more than likely be the final opportunity for fans to see Jose Bautista play at the Rogers Centre in a Blue Jays uniform. Sunday’s game against the New York Yankees will likely be his last-ever game in a Blue Jays home uniform.

The city where Bautista blossomed into one of baseball’s most charismatic and polarizing baseball players is preparing to bid goodbye to one of their all-time franchise greats.

It’s been a long and winding road for Bautista and the Blue Jays. His arrival in Toronto during late August of 2008 was met with little-to-no-fanfare. He was merely a journeyman utility infielder whose claim to fame was playing for four different teams in the span of one season. Bautista had the dubious honour of suiting up for the Orioles, Rays, Royals and Pirates during the 2004 season.

Despite playing for all those teams and no matter where he goes next, Bautista will always be a Blue Jay.

Toronto is where Joey Bats made a name for himself. Heck, it’s the city where he adopted that very nickname. He became a household name during his time in Toronto.

He may not hit the ball with the same ferocity anymore, as the former two-time home run champion is a shell of his former self; all but ending any speculation whether the Blue Jays will bring him back for the 2018 campaign.

Although only two years removed from the iconic “bat flip”, Bautista isn’t the player he once was. He’s one strikeout away from breaking the Blue Jays’ franchise record for strikeouts in a single season. Some days his age is very apparent at the plate and in the field.

However, Bautista’s struggles were furthest from the Blue Jays biggest concern this year in a season which saw the team take a step back. The right fielder was brought back on essentially a one-year deal to help extend the Blue Jays window of contention by another season, but that window is now firmly shut.

Bringing back a 37-year-old outfielder is the last thing the Blue Jays need to do next year if they want to return to the postseason. And it’s easy to dwell on the club’s shortcomings this year. For a moment, let’s take time to appreciate the man who helped legitimize the Blue Jays with one of the biggest home runs of the past decade.

It’s important to cherish these final games and at bats of Bautista as a Blue Jay, because come next year … it may all be a memory.

A chance to say thanks

Very rarely does a franchise icon get a proper send-off. Carlos Delgado’s tenure in Toronto ended ugly at the end of the 2004 season. Roy Halladay spent the final year of his Blue Jays career surrounded by trade rumours. In both of those cases, it wasn’t certain whether those players would remain Blue Jays; but with Bautista, there’s a 99% probability this is it for him as a Blue Jay.

Here’s where Blue Jays fans get the rare opportunity to salute one of the greatest players to ever don a Blue Jays uniform before he takes it off forever. This is when you can salute Joey Bats and thank him for all the incredible memories he made during his 10-year career as a Blue Jay.

Thank Bautista for his breakout 54 home run season in 2010. Thank him for his even-better 2011 season when he finished third in the American League MVP voting. Thank the man for his six All-Star Game appearances.

Thank Bautista for all those unforgettable run-ins with the Baltimore Orioles and the Texas Rangers and how he always seemed to get the last laugh against his adversaries.

Thank Bautista for one of the best moments in Blue Jays history: the bat flip. Thank him for being one of the most badass bearded baseball players of the 21st century.

His name will one day join the likes of franchise greats on the Level of Excellence at the Rogers Centre; names like Roberto Alomar, Dave Stieb, Carlos Delgado, and Tony Fernandez.

Until Bautista’s name is officially enshrined as a legend in Toronto, before he makes that final trip to the plate in Toronto this year, make sure you tip your cap to Joey Bats.