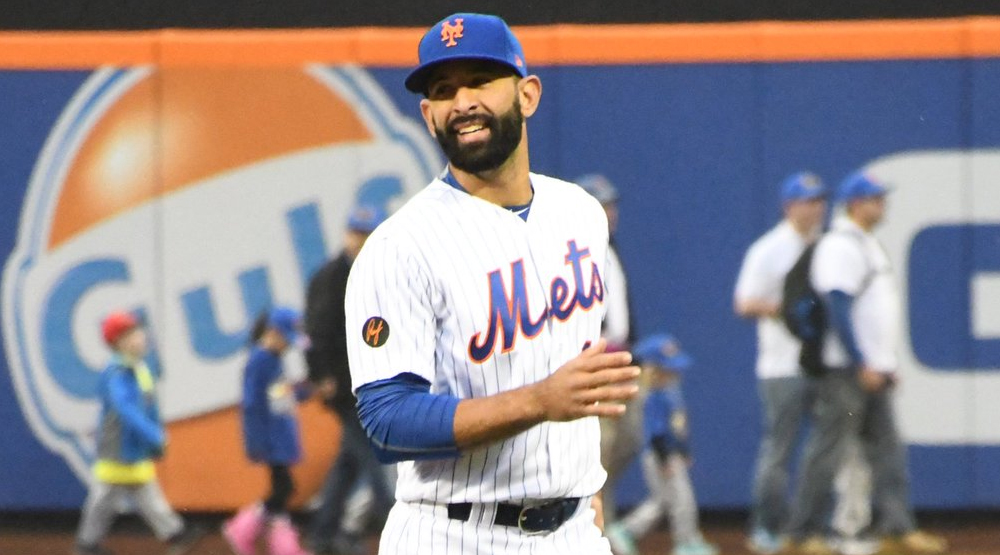 Whoever though Jose Bautista was on the brink of retirement was foolish to think so. Wait… That was us. Our bad, Jose.

After being released by the Atlanta Braves just a few days ago, Joey Bats dusted himself off and quickly found a new home; signing with the New York Mets.

In fact, this transaction materialized incredibly quickly. It progressed from the Mets showing interest earlier this morning, to him officially signing with the club, to being written into the lineup, batting fifth and playing right field.

He’s 37 years old, but the man knows how to get into a uniform quickly and onto the field for a brand new team.

The Mets are a team decimated by injuries to their outfielders (not unlike the Blue Jays), so with a clear need for an outfielder, Mets General Manager Sandy Alderson inked the 15-year veteran to a contract.

Alderson cited Bautista’s impressive career numbers versus left-handed pitching, where he owns a .257/.367/.491 slash line with 82 home runs in 702 career games. With Yoenis Cespedes currently on the disabled list, Bautista projects to see steady playing time in the outfield.

Joey Bats reunites with his fellow countryman and former teammate, Jose Reyes. The two played together with the Blue Jays from 2013 to 2015.

Another interesting tidbit; this is actually Bautista’s second tour with the New York Mets. They were one of the five, yes five organizations he was a part of during the 2004 season.

The Dominican Republic native only actually dressed to play for the Orioles, Rays, Royals and Pirates. But for a New York minute, he was a member of the Mets organization. They dealt him to the Pirates at the trade deadline of 2004. Now, he gets to finally wear the Mets uniform he was promised some 14 years ago.

See? You really can go home again to the team where you spent all of five minutes.

And he’s in the lineup, batting fifth tonight! #MLBTonight pic.twitter.com/FO5HS2QOhn

Bautista bounces from the Braves to the Mets, staying within the National League East and now is 40% of the way to completing his “I played for every team in the NL East” punch card. They say once you get all five, you get a free beard trim.

Given the uncertain status of many remaining unsigned free agents in their mid-to-late 30s, the prospects didn’t look good for Bautista to find a new home. However, an opportunity arose in New York due to injuries on their roster, which led to this chance for Bautista.

In the immediate future, he’ll slot in as the Mets’ fourth outfielder and will likely start in the outfield versus left-handed starting pitchers. Upon Cespedes’ return from the disabled list, Joey Bats will slide down to fifth on the Mets’ outfield depth chart.

He won’t play the outfield every day, but starting a few games a week and contributing in a pinch hit capacity is far better opportunity for Bautista than any other potential landing spot.

This is the third team he’ll suit up for over the past eight months, but the man clearly isn’t ready to call it a career quite yet. Joey Bats may still have some gas left in the tank after all.

Circle July 3 and 4 on your calendar, because if Bautista sticks with the Mets, that’s when he’ll make his return to Toronto.