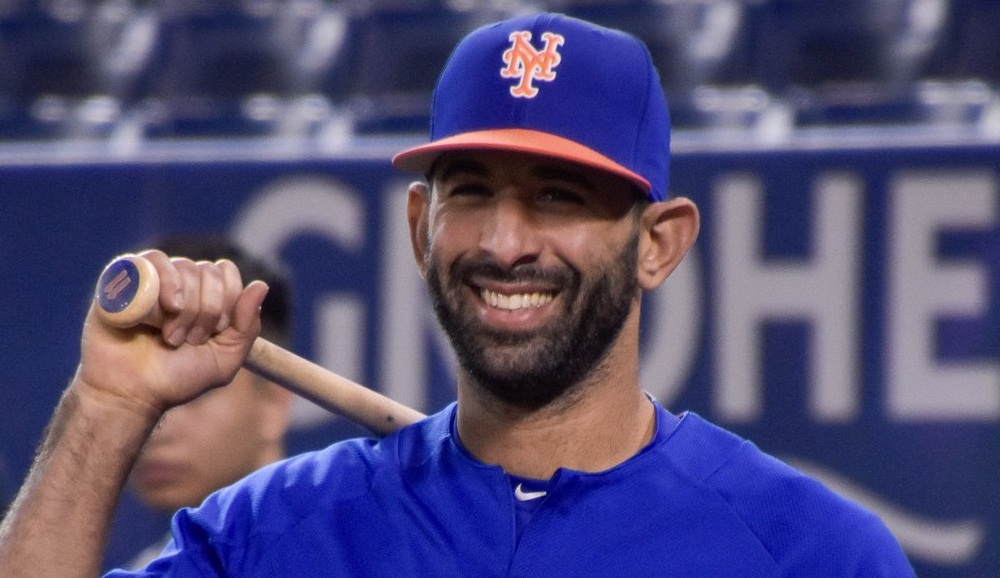 Jose Bautista had the perfect send-off from Blue Jays fans last year. And if that was the last moment they’d ever see him in Toronto, it would’ve been great. But on Tuesday evening, they had another opportunity not only to say goodbye, but also thank you.

Whether it’s the signature New York Mets’ orange and blue or the Atlanta Braves’ maroon, navy blue, and gold, there’s one colour that will always suit Bautista the best: Blue Jays blue.

No matter how many other uniforms he adorns from here on out, he will always be a Toronto Blue Jay. He’ll always be remembered for what he did in the city of Toronto.

For the first time in over a decade, the 15-year veteran came to town as a visitor. Not since his playing days with the Pittsburgh Pirates in 2008 has Bautista played in Toronto wearing anything but a Blue Jays uniform.

It was weird to see him in a New York Mets uniform, just as abnormal as it must’ve felt for him to play in Toronto for the first time in a visitor’s uniform. For the better part of a decade, he was a staple in the Blue Jays’ lineup … and then he wasn’t.

Blue Jays fans with a standing ovation as José Bautista returns to Toronto.

For a while there, it looked like Major League Baseball may have left Joey Bats behind. But like any beleaguered veteran, Bautista trudged along, signed with the Braves and eventually made his way to the Mets.

Prior to becoming a franchise icon with the Blue Jays, Bautista was infamous for being a baseball nomad; suiting up for four teams in the span of one season and even belonging to the Mets organization for a few fleeting minutes during the 2004 season.

He wasn’t drafted and developed by the organization, but Bautista felt like a product of the Blue Jays. Toronto is the city where he blossomed into a superstar and he developed into one of MLB’s most polarizing players … all while wearing a Blue Jays uniform.

Bautista’s legacy as a Blue Jay will go down as one of the most memorable in franchise history. His history in Toronto is punctuated by that fateful Game 5 bat flip home run during the 2015 ALDS. He saved the Blue Jays from elimination; he stopped the Jays from being remembered for losing a series in one of the most painful ways imaginable.

Joey Bats has several signature moments, but the bat flip home run is now a “where were you moment” for a new generation of Blue Jays fans. In fact, it’s not unreasonable to say there’s a brand new crop of fans because of what Bautista accomplished.

The fact that he landed in New York and is enjoying a bit of personal success with the Mets is reassuring. It seemed like the 37-year-old still had some gas left in the tank, even though his 2017 campaign was the worst of his career. After his impressive career, it didn’t feel right for Bautista to salute the Rogers Centre last year and walk away from baseball entirely.

It appeared as though baseball had moved on from Bautista, but he found a new home with his former general manager in Toronto, Alex Anthopoulos. Bautista’s time in Atlanta was short-lived, but that opened up an opportunity to play with the Mets. Since then, he’s become the Mets’ everyday right fielder and oddly enough, one of their team’s best players this year (Bautista currently sits third on the Mets’ position player WAR leaderboard).

Mind you, their team has been decimated by injuries – which led to Bautista’s signing in the first place – but if his time in Toronto had come to an end and Atlanta didn’t have room for him on the roster anymore, at least Bautista can create some new memories in New York.

Regardless of how many teams he plays for moving forward, it will always feel strange to see Bautista and that well-trimmed beard of his surrounded by anything other than a Blue Jays uniform.