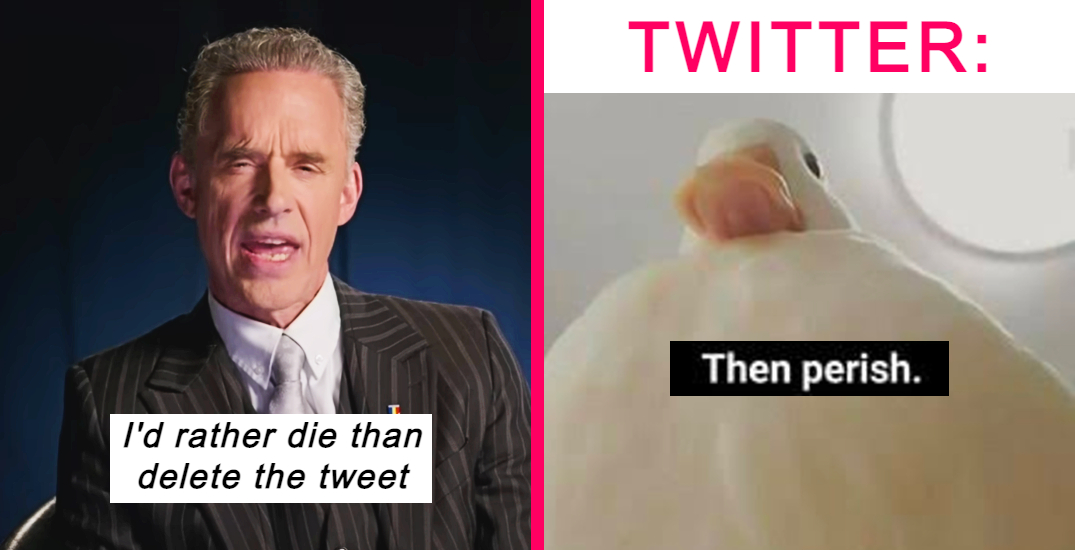 Editor’s note: This article mentions and discusses homophobia and transphobia.

Clinical psychologist and Edmonton edgelord Jordan Peterson is in the news yet again for spewing hateful rhetoric — and being roasted for it.

This time, his target was Umbrella Academy star Elliot Page, who is a transgender man, and the whole thing devolved into a series of cringy tantrums, all without Page even needing to participate or acknowledge Peterson.

“Remember when pride was a sin?” Peterson had tweeted on June 22, completely unprompted, followed by a transphobic comment about Page’s top surgery, mentioning his deadname.

The tweet went against Twitter’s community guidelines and was widely condemned. It earned a strike, too. Peterson’s account was suspended and he was asked by Twitter to delete the tweet or face continued suspension.

Mikhaila Peterson, the psychologist’s daughter, even tagged Elon Musk in a tweet about her father getting a strike, complaining that Twitter was “definitely not a free speech platform at the moment.”

What followed was a desperately long video Peterson posted on his YouTube page on July 1. In it, he continues his tirade against transgender people and Twitter, and how he doesn’t care what “woke moralists” have to say.

And nothing says “I don’t care” like a 15-minute video where all you’re doing is talking straight into the camera lens.

jordan peterson making a 15 minute video with two different cameras crying about being suspended on twitter for straight up being transphobic about elliot page is hilarious. “intellectual giant” crying and debating twitter tos with the absolute worst arguments i’ve ever heard.

In response to the criticism he levied, Peterson said he’d “rather die than delete the tweet.” That statement certainly did not serve him well.

jordan peterson: “i’d rather die than call Elliot Page by his name” pic.twitter.com/lhnIKbXAA3

When Jordan Peterson says he would rather die than say Elliot Page pic.twitter.com/hAg9RriV8q

The YouTube video was ripe for memes, and netizens certainly took their liberties. One even created a raunchy remix by editing it (psst, the audio is NSFW).

Jordan Peterson has some thoughts pic.twitter.com/eOODszanon

This whole thing spanned over nearly two weeks with not a word from Elliot Page, who is being credited with destroying transphobic people by simply existing.

Elliot Page has now driven the mental breakdowns of Jordan Peterson AND Dave Rubin and he didn’t even have to say anything. what a king

But fun and games aside, many are stressing how important it is to acknowledge the damage narratives like Peterson’s cause, and the way they hurt transgender people.

He also called him sinful for being proud of who he is, & said that him having gender-affirming surgery was a crime