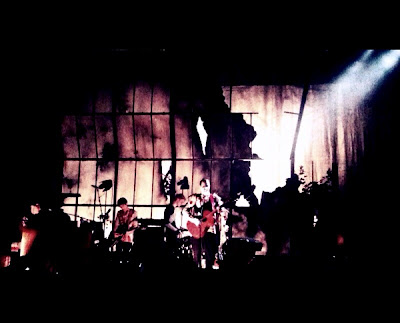 Image: Crappy image and review by Mpah
Two things were clear after the Jonsi concert on Tuesday night; one that the ticket was definitely worth the price of 50 dollars and two that you had just experienced something that few will get to experience this summer while Jonsi tours around in support of his solo album “Go”

The Sigur Ros front man was obviously shy and nervous when he stepped out on stage to perform his first song, a soft acoustic ballad but which was lifted heavily by the power of his angelic voice. Throughout the next few songs his dramatic stage set up finally took life in the form of animated butterflies, wolves, rabbits and even a wild fire that burned through the backdrop causing it to fall to the ground revealing an apocalyptic world where Jonsi was left with his band who performed all the songs from his album. Thanking the crowd for attending he let everyone know that he and his band were just as excited for the show since it was their first on the tour and his first without long time band Sigur Ros behind him. The whole aspect of his show which seemed to revolve around new life and human growth really symbolized Jonsi’s own personal feat with that he alone is able to carry an entire show on his shoulders and give the audience a triumphant and epic musical sensation.

Regardless where you were seated the entire Vogue theatre was lit up with dazzling colors and enough instruments to make a full orchestra jealous. The band circulated through the instruments backing up Jonsi complimenting his voice immaculately and creating a symphony-esque sound through out every song. When Jonsi was most in control seemed to be the crowd favorites “Go Do” and the poppy fresh “Boy Lilikoi” which even with the stage set up as bleak dead world, made everyone feel warm and full of emotion.

The climax of the entire night had to be the very end where Jonsi wearing a colorful, feathery headdress and company performed “Grow Till Tall” the slowest and softest song on the record, was obviously meant for a live venue because it completely exploded on stage. Everyone in attendance would agree that during the huge dramatic ending it felt like the roof had been ripped off the Vogue and a massive blizzard had erupted on stage and the band caught in the epic storm had no choice but to perform through it like it was their last moment on earth. The energy and emotion evoked was something that anyone lucky enough to be there will never forget. The only real regret I have is that I didn’t get tickets for the next night as well…