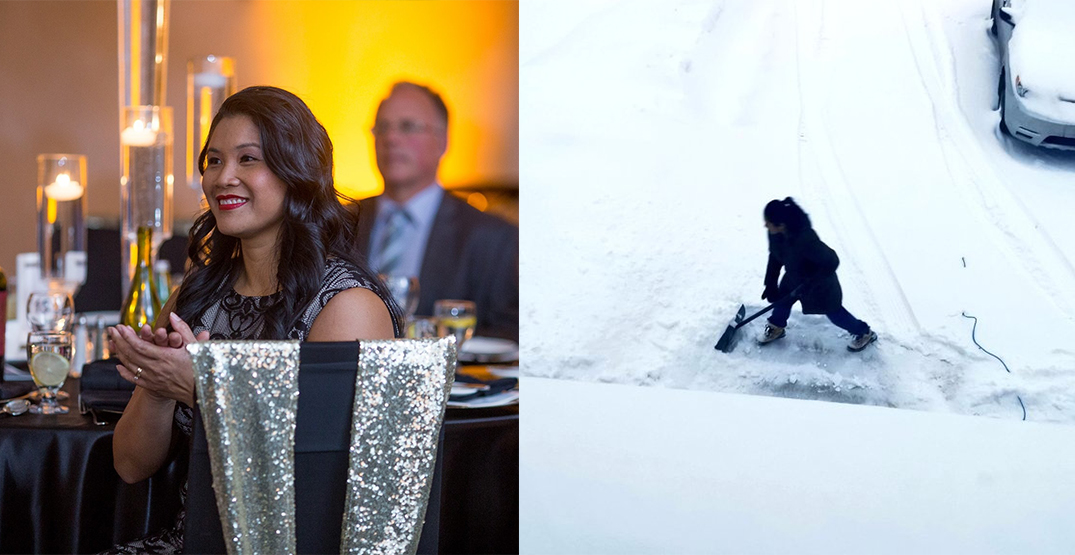 After a weekend of being dragged by the internet, Manitoba Cabinet Minister Jon Reyes’ wife sets the record straight on a viral photo of her shovelling snow after a 12-hour hospital shift.

“Sorry in advance for this long-winded post,” she began. “But as most of you know, I just wanted to shovel!”

Cynthia explains how the couple has been asked for interviews from many major news outlets, but that she declined because she wanted to make sure people heard the story directly from her.

She then goes on to explain that she really didn’t mind shovelling because it helps her “decompress.”

“What people should know is that I came home from a 12-hour night shift at the hospital, it was a good night, which lately, as you can imagine, hasn’t always been the case for myself and my nursing colleagues. As I drove home, it’s my time to decompress; I arrived home before anyone was awake, afterall it was a Saturday morning.” Cynthia wrote.

Even after a 12 hour night shift at the hospital last night, my wife still has the energy to shovel the driveway. God bless her and all our frontliners. Time to make her some breakfast. 🙏🏽 pic.twitter.com/91vahySLqO

“As I pulled up to my driveway, I felt energy to shovel the snow that fell all night and into the morning. As many Manitobans and Canadians know, it’s a great workout, it allowed me to unwind, it’s refreshing after having worn an N95 mask almost the entire night, the weather was mild, and it was quiet and peaceful,” she continued.

She says her shovelling actually woke up a sleeping Jon.

“Jon heard me shovelling, it actually woke him up, and he was surprised and impressed to see that I had energy after a long shift to do this, so he took a pic, made breakfast and posted, and the rest is embedded in social media history forever!”

She also explained that the family shares different chores regardless of gender, but “mostly on who is available to do it.”

“That brings me to the fact that this tweet probably would not have gone viral if the gender roles were reversed, or if my husband were not a politician,” Cynthia wrote.

Dozens of supportive comments poured in.

“Well said,” one person wrote. “Social media can be incredibly irrational and judgemental.”

“Laughter really is the best medicine shared with someone you hold dear to your heart. I am a lucky guy,” the caption reads.

The internet moves fast, so hopefully, they’re on to memeing the next thing.