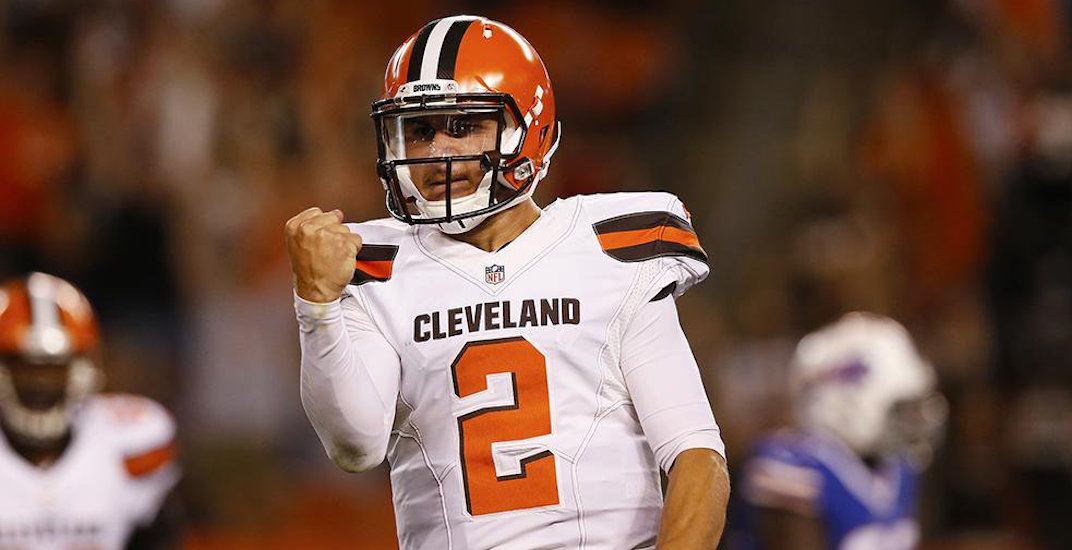 Are you ready for Johnny Canadian Football?

Johnny Manziel, the controversial former Cleveland Browns quarterback, could be coming to the CFL. Just not this year.

After weeks of speculation, the CFL has released a statement, deeming “Mr. Manziel” ineligible for this season. The 2012 Heisman Trophy winner has his CFL rights owned by the Hamilton Tiger-Cats, and will be eligible to play in Canada if he meets “certain conditions”.

After an extensive process of due diligence and an in-person meeting with Mr. Manziel, the Commissioner has decided that he will not register any contract for Mr. Manziel for this season. However, Mr. Manziel will be eligible to sign a contract for the 2018 season and, if Mr. Manziel meets certain conditions that have been spelled out by the Commissioner, the CFL will register that contract. The specifics of those conditions are confidential and will not be disclosed. The CFL has extended the stay on the expiry of the 10-day window for Mr. Manziel until November 30, 2017 and therefore Mr. Manziel will remain on Hamilton’s negotiation list until that date.

The conditions for Manziel to play in the CFL are confidential, but it doesn’t take a rocket scientist to figure out what CFL Commissioner Randy Ambrosie is doing here.

Manziel’s off-field troubles are well documented. The 24-year-old has a reputation as a party boy, and his commitment to football has been questioned. The CFL appears to be a little bit nervous about welcoming him in, taking a conservative approach.

If the league is to take Manziel on, they want it to be a successful venture and not a side show. With just six weeks remaining in the CFL season, you have to wonder how long it would take the QB to get acclimatized.

Manziel was saying all the right things in a statement he released on Wednesday:

“I recently had a really positive meeting with Commissioner Ambrosie and welcomed the chance for us to get to know each other and have an in-depth talk about a possible future with the CFL. I love this game and want to be back on the field in a situation where I can help a franchise in the long term.

“Over the past months, my agent helped me vet all of my options for playing, figuring out where I could be most effective and get back to having the most fun with the game I love. I’m ready to play today, but we all agreed with the Commissioner that it made no sense for me to join a team with only a month left in the season – it wouldn’t have been fair to my teammates, coaches or the fan base. I want to come into a team and earn my job day one, like everybody else. I look forward to preparing myself as best I can and look forward to what the future holds.”

The former NFL first rounder was released by Cleveland on March 11, 2016, less than two years after he was drafted. He hasn’t played a pro football game since.

The move means that if any team signs Manziel tor 2018, earliest he could return to #NFL is 2020. Part of the reason he wanted to sign now https://t.co/8K3UcAmvJm

Can Manziel succeed in the CFL? If he stays out of trouble, there’s no reason to think not. Despite two years away from the game, he’s still young, and still has talent.

Some pundits have theorized that Manziel would be well suited to the CFL game, which allows more play outside of the pocket given the wider field.