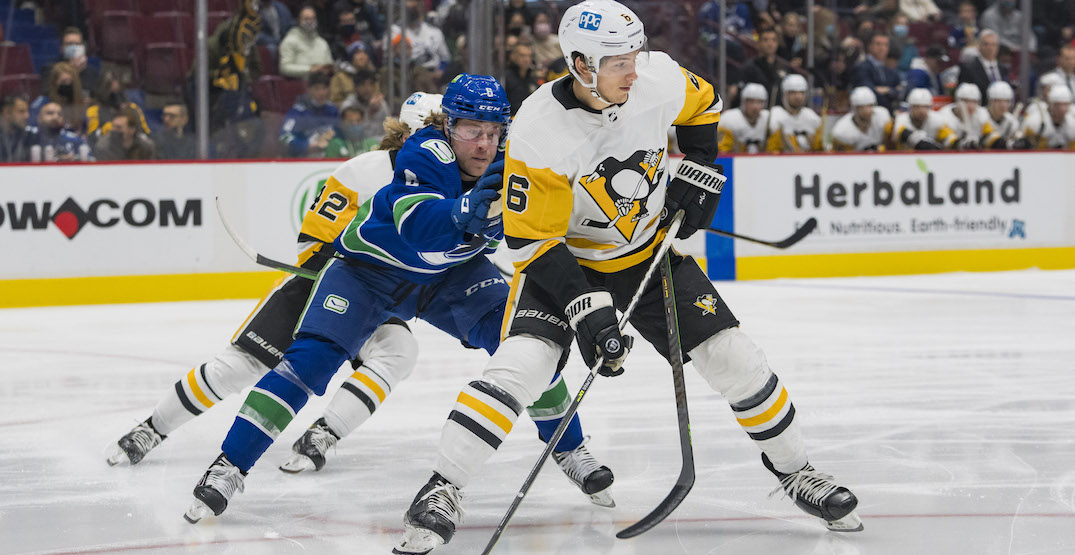 With Jim Rutherford and Patrik Allvin now in Vancouver, there’s clearly a connection between the Vancouver Canucks and the Pittsburgh Penguins.

Another former Pens executive, Canucks assistant GM Derek Clancey, was reportedly in Pittsburgh to scout the Penguins on Monday.

Don: You've got some #Canucks tidbits..

The guys talked about the #Canucks checking out the Penguins and a player to watch. https://t.co/h4e2SL3agJ pic.twitter.com/ddRLqzn4ZQ

Rick Dhaliwal from CHEK TV openly wondered if the Canucks target in a potential trade with Pittsburgh could be 24-year-old defenceman John Marino. Dhaliwal also mentioned 28-year-old centre Evan Rodrigues as another player the Canucks could have interest in.

While the Canucks do need another top-nine forward, their more glaring need is to add a young, responsible, right-shot blueliner to the top four.

What Marino brings to the table

What more do you need?

Back in 2019, Marino quickly went from interesting prospect to top-four staple.

His elevation up the Pens lineup was almost unfathomable.

Drafted in the fifth round by the Edmonton Oilers back in 2015, Marino was traded to Pittsburgh in July 2019 when it became clear that he wasn’t going to get the opportunity he wanted in Edmonton.

After three years in the NCAA with no pro experience, the likely path for Marino was to play for the Penguins’ AHL affiliate.

However, after a rock-solid training camp, he began the year in Pittsburgh.

And, just one month into the 2019-20 season, Marino was playing upwards of 20 minutes per night.

Since then, Marino has become a solid defensive defenceman and a heavily trusted penalty killer for the Penguins.

I still believe in Marino even if he's not trending in the right direction. He's a solid 2nd pairing player at least but I think he's got the puck skills to be more than that. #LetsGoPens https://t.co/IH0gO0F7fF pic.twitter.com/uoCHKXrpS7

Even this season, he and main defence partner Marcus Pettersson have the lowest expected goals-against among Pens defenders, despite both having the highest defensive zone starts on the team while facing top competition.

According to a report from Pittsburgh Hockey Now, the Penguins have “broached the idea” of trading for Brock Boeser. As speculation grows around Boeser, he could theoretically be the main piece going back to the Penguins for Marino.

While the Penguins’ top line of Jake Guentzel, Sidney Crosby, and Bryan Rust is on fire, the rest of their offensive attack is lacking.

That’s clearly an area where Boeser could help.

Both the Penguins and Canucks are up against the salary cap, although both squads do have some breathing room thanks to LTIR.

The Canucks could also go down the avenue of trying to offload a contract on the Pens. Trading Marino would hurt Pittsburgh’s defensive depth. For them, perhaps adding a player like Tucker Poolman or Travis Hamonic into a deal like this would help offset the loss on defence.

Hamonic was acquired by Pens executive Brian Burke back when he was a member of the Calgary Flames front office.

Would the Pens deal him?

Envisioning Marino in a Canucks uniform makes a ton of sense. He fits the profile of young players that Rutherford and Allvin say they want to target.

Marino was also acquired by Rutherford once already. And, the six-year, $26.4 million extension he signed in 2021 was the last transaction Rutherford made before he resigned as Pens President and GM.

Plus there’s the fact that Marino is also a really good hockey player.

That’s the main reason why Pittsburgh might be unwilling to deal him this season.

And yes, that's a point in every game this season. pic.twitter.com/2gKEHYq7tD

Trading away Marino would leave a gaping hole on their right side. The depth chart if Marino were absent would be Kris Letang, Chad Ruhwedel, and Mark Friedman.

Even if they add someone like Hamonic or Poolman, is that really good enough for a Cup contender?

The other reason why a trade like this could be unlikely is because of Boeser’s impending qualifying offer. Pittsburgh is already going to be hard-pressed to keep their own star top-six forward in Rust, who is due for a massive raise off of his $3.5 million salary this season.

Perhaps if Garland was the target instead of Boeser, the cap hit might make more sense. That being said, this is still a tough deal to envision from Pittsburgh’s standpoint.

Canucks need to find “the next Marino”

Credit to Rutherford, he and his staff did a masterful job of identifying Marino’s talents when they poached him from Edmonton.

Rutherford and Allvin need to find their next Marino on the market.

That’s not as sexy as trading for a bonafide top-four guy – especially one that Rutherford has ties to – but it is the most prudent and likely course of action for the Canucks.