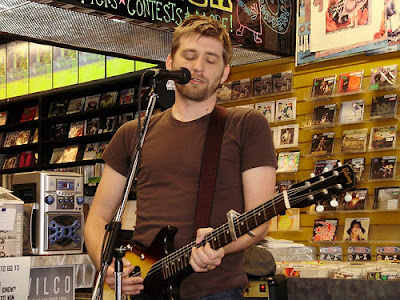 First of all you’re probably wondering “Who the hell is John K Samson and why the hell should I care?” Let me tell you, he’s the singer for the Canadian rock group The Weakerthans and is one of the most talented song writers to come out of Canada….yes even when compared to Neil Young, Rush andGord Downie.

He’s been working on a set of EP’s dedicated entirely to different roads in Manitoba, how Canadian is that? “Provincial Road 222” is the second in the series and as much as it pains me to say this one just doesn’t hit the mark his previous “Rural Route 65” EP did. This 3 song EP starts with a beautiful song and the only highlight of the short album; “The Last And” self described by Samson as being written about a relationship very similar to Principal Skinner and Miss Krabappel from the Simpsons, only in this case Principal Skinner is married and the school is in a small town in Manitoba. I know this because I was lucky enough to see him perform a live solo show where he played this song and talked about how it came to be. This will always be John K Samson’s strongest asset, taking a topic that no one else would think of and writing a great song whether it be rock, folk or how ever you’d describe the next song on the EP. “Petition” is written and performed as a petition by the citizens of Riverton Manitoba to get Reggie Leach an Aboriginal hockey player who played for the Philadelphia Flyers inducted in to the Hockey Hall of Fame. Samson is joined by what sounds like something straight out of a Town Hall meeting and the choir like vocals are very uncharacteristic of his previous work, unfortunately in this case…I don’t think it really works. To end the EP is the song “Stop Error” basically a monologue of sorts describing all the different errors in the modern technological world one may encounter, including the blue screen of death. Another tune very different from any of his previous work and again unfortunately I have to say…this EP falls a little short and if it wasn’t for the opening song inspired by the Simpsons, this would be an epic failure.

John K Samson performs “The Last And” live in Germany