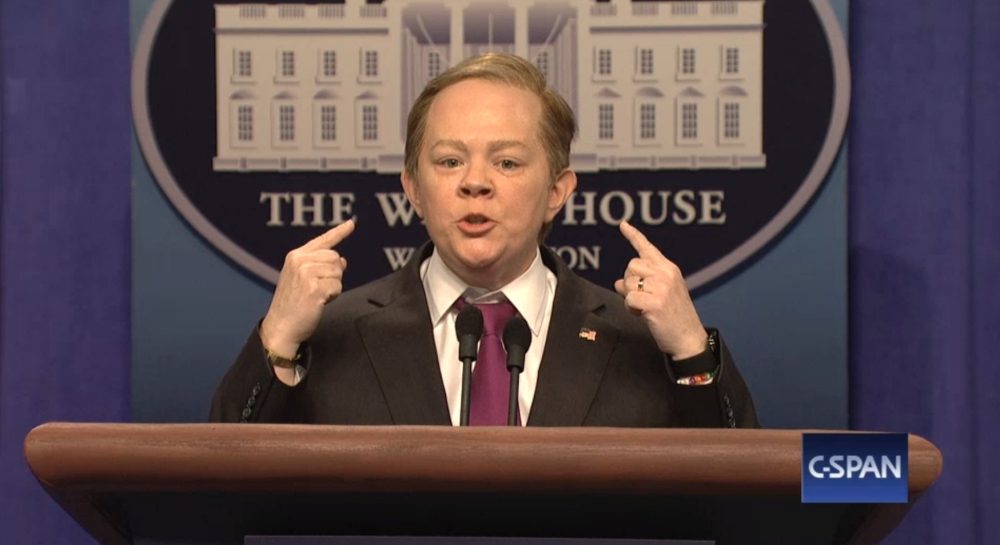 The latest blunder is practically comedy gold. Parody accounts are already popping up and Twitter has, as always, been especially quick with the comebacks.

For all the Canadians wondering who Joe Trudeau is, he’s Justin Trudeau’s evil twin. Goatee and all. #JoeTrudeau pic.twitter.com/PdriJkX0Vy

Is it me or does Joe Trudeau sound like the name of a Dr Seuss character? #JoeTrudeau

Hey @melissamccarthy can you fill in for @PressSec for real? We know that you can read a script. #JoeTrudeau embarrassing. #remote podium

Joe rhymes with Trudeau. Since @PressSec reads at a Dr. Seuss level, anything that doesn’t rhyme is an alternate fact. #JoeTrudeau

“Joe Trudeau” was the affectionate pet name given to our Prime Minister by his father, Fidel.

#JoeTrudeau does have a certain ring to it, like a surly 1870 Quebecois gunslinger with an unflappable moral compass https://t.co/YpxBDYN3E1

@melissamccarthy Not that you need more material, but I expect #JoeTrudeau to be in your next monologue as #Spicer
You’re brilliant, btw 🙂

Is Joe Trudeau a new line of clothing only available at Real Canadian Superstore? pic.twitter.com/YE2RbBOwcy

To be fair, it’s got a great rhythm to it.
JOE
TRUDEAU
JOE
TRUDEAU pic.twitter.com/GlA2cQAw8e

Between #JoeTrudeau, Bowling Green Massacre & the #US gov’s penchant for dumb errors, 2017 is off to a bad start.#AlternativePrimeMinisters

Joe Trudeau – because not only do we have #alternativefacts now, but also #AlternativePrimeMinisters.
The Timeline is breaking apart.

#SeanSpicer has apologized to our PM and wishes he and Jennifer Aniston nothing but the best. #JoeTrudeau

I think #JoeTrudeau is a PM all Canadians can get behind. pic.twitter.com/eq7SYjlng1