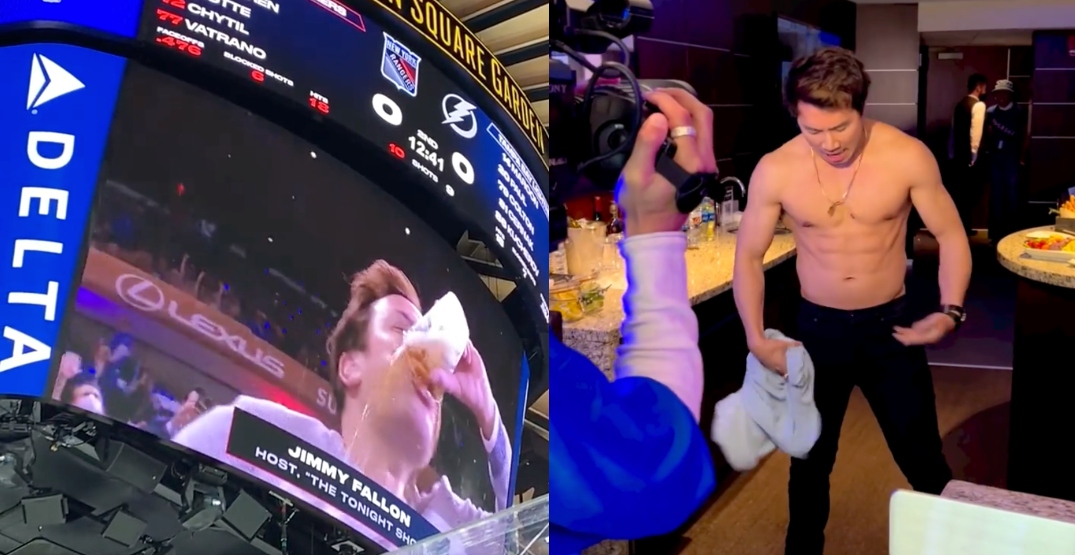 Simu Liu took his shirt off, while Jimmy Fallon crushed a hot dog and beer in mere seconds (sort of), in what have to be two of the best celebrity performances at an NHL hockey game this season.

Both men were in attendance at Madison Square Garden where they saw the Tampa Bay Lightning take a 3-2 series lead over the New York Rangers.

But long before then, they each entertained the crowd when put on the big screen.

Midway through the second period, the camera panned to Fallon, with The Tonight Show host springing into action. Fallon first dunked a hot dog into his beer, a nod to a viral video from a New York Yankees game in April, before comically devouring it and attempting to chug a beer — with most of it landing on the floor.

Some of it appeared to land on tennis legend John McEnroe, who was sitting in front of Fallon.

Safe to say that @jimmyfallon is enjoying the hockey 😎 pic.twitter.com/6uxy4SG6AO

Jimmy Fallon is having the time of his life. 😆#StanleyCup pic.twitter.com/xJ2FB7XLlc

Earlier in the game, Liu put on a different kind of show. With the camera on him, the ripped Canadian actor took off his shirt, put on a Rangers one, and whooped it up for the crowd, repeatedly yelling “let’s go!”