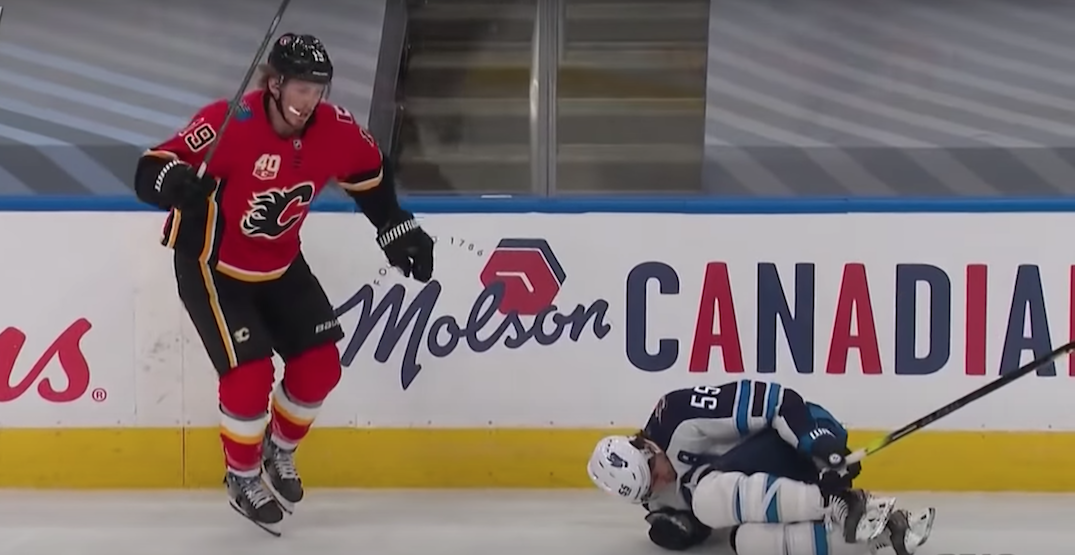 Winnipeg Jets head coach Paul Maurice didn’t mince words when asked about what caused an injury to Mark Scheifele, his number one centre, in Game 1.

Scheifele fell awkwardly into the boards early on in the first period after coming into contact with Calgary Flames forward Matthew Tkachuk. It looked like incidental contact to many observers, but Maurice didn’t see it that way.

“It was intentional. It was a filthy, dirty kick to the back of the leg,” said Maurice in his post-game media conference. “You can’t see it on the program feed, but you take the blue line feed and you zoom in, [Tkachuk] went after the back of his leg. He could have cut his Achilles. He could’ve ended the man’s career.

Writhing in pain, Scheifele appeared to hurt his ankle, and left the game immediately.

Tkachuk scoffed at the suggestion that he had any role in Scheifele’s injury.

“No. Absolutely not,” Tkachuk said in response to a reporter’s question. “I’m back-checking on him, it’s such an accident. I felt terrible.”

It was a costly game for the Jets, and not just because they lost Game 1 of the best-of-five series 4-1. Scheifele’s injury appears to be serious, and in a short series, he may not return. The 27-year-old tied for the Jets team lead in scoring this season with 73 points in 71 games.

“No matter what, you can’t replicate what he brings to our line-up,” Jets captain Blake Wheeler said of losing Scheifele. “It’s a big piece of what we do.”

It’s only been one game but this series is already filled with drama. The Flames can put a stranglehold on the series with a win in Game 2, which is scheduled for Monday at 12:30 pm MT.