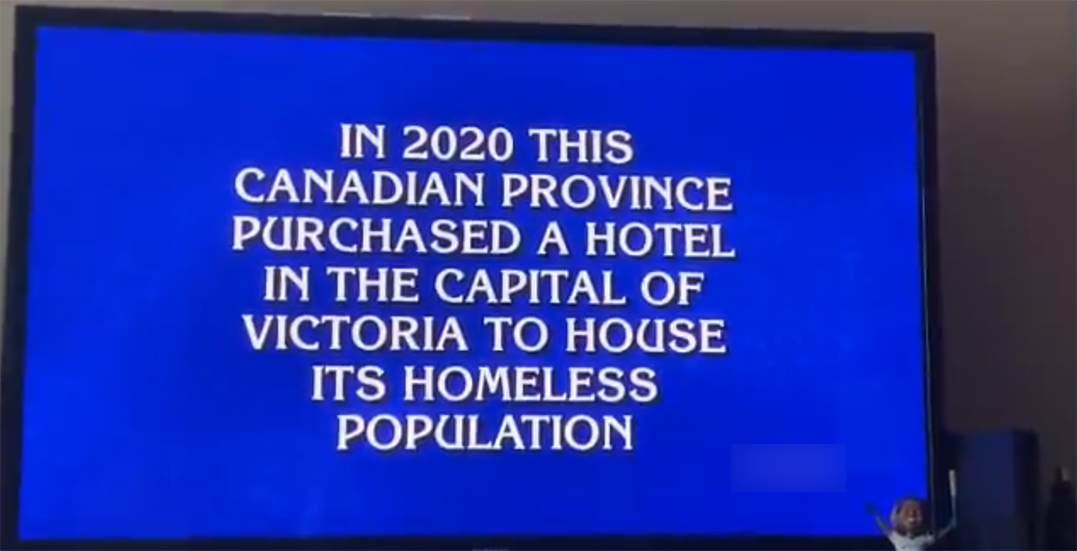 British Columbia was the answer to a recent Jeopardy question (David Eby/Twitter).

A British Columbian housing initiative for vulnerable residents was a recent topic on the popular game show Jeopardy!

The question was bought up in an episode that aired earlier this week.

“In 2020, this Canadian province purchased a hotel in the capital of Victoria to house its homeless population,” asked actress and neuroscientist Mayim Bialik, who is completing a brief stint as guest host for the show.

British Columbia was the answer to a recent Jeopardy question (David Eby/Twitter).

Category was “Some Good News”. pic.twitter.com/qFmN0kItng

In May 2020, the provincial government announced that it had purchased the Comfort Inn Hotel in Victoria for $18.5 million in an effort to provide more housing in the city.

At the time, BC said that the short-term use of the building would be to provide approximately 65 rooms of temporary accommodations with wraparound support for people in encampments on the Pandora Avenue corridor or Topaz Park.

“Everyone deserves to have safe, stable housing they can afford, and this site offers great potential to deliver a mix of permanent housing to meet the needs of people in Victoria,” said BC Housing Minister Selina Robinson.

This purchase, she added, “will further add to the significant efforts underway with the community and local government partners in the Capital Regional District to tackle the housing crisis and build the homes people need.”

The game show question, however, was received with both enthusiasm and criticism. While Robinson called the shoutout “awesome,” some social media users argued that it was tone-deaf or that the provincial government had yet to do enough for BC’s vulnerable residents.

In addition to Victoria’s Comfort Inn, the BC government announced that it had secured hundreds of empty hotel rooms to temporarily house homeless residents over the COVID-19 pandemic.

According to the province, people experiencing homelessness would first be moved into hotel rooms or community centre spaces for up to six months before being transitioned to permanent supportive housing.