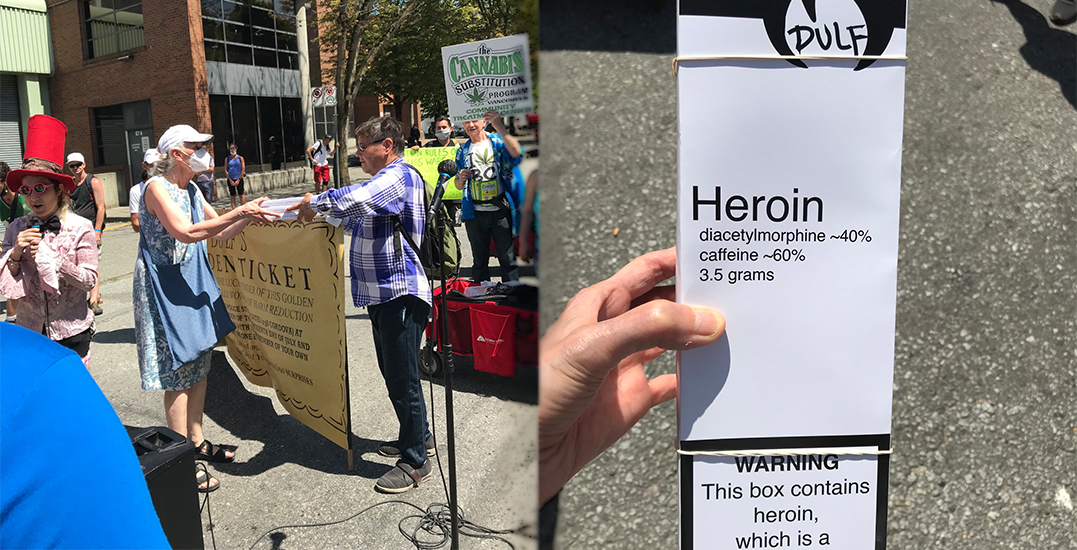 A Vancouver city councillor is in the spotlight after handing out drugs during a safe supply protest in downtown Vancouver.

On Wednesday, the Drug User Liberation Front (DULF) and the Vancouver Area Network of Drug Users (VANDU) hosted a block party in protest against the city’s model to decriminalize the simple possession of illicit drugs.

The demonstration took place in front of the Vancouver Police Department (VPD) station at Main Street and Cordova. During the event, the organizations handed out clean heroin, meth, and cocaine.

TODAY, 1PM: VANDU and @DULFBC will be distributing clean heroin, meth, and cocaine outside the @VancouverPD station at Main and Cordova. Block party at Hastings and Cordova at 2PM. pic.twitter.com/U7xssftg4u

Among the participants was city councillor Jean Swanson, who shared photos online of her participation in the parade, as well as distributing a package that reportedly contained heroin.

“We need government action now so everyone can get safe drugs and no one dies,” Swanson wrote in one tweet.

Helping hand out safe drugs with VANDU and DULF today. We need govt action now so everyone can get safe drugs and no one dies ! pic.twitter.com/yLrXl58DPi

In another tweet, she stressed that six deaths per day from toxic drugs are “way too many.”

I got to hand out safe drugs today with VANDU And DULF. 6 deaths a day from poison drugs is way too many. 1 is too many. Safe supply now !! pic.twitter.com/YokjBLBHC4

The move drew criticism from a wide number of people, however, including fellow city councillor Melissa De Genova who suggested that Swanson’s actions were akin to drug trafficking.

I support the #FourPillars & #safesupply-but if it isn’t supplied through a government authorized program, it can’t be ignored that it is:
💊Drug Trafficking
💊funding organized crime
💊not dosed by a Dr.
All I can say @rkaisers_VPU is that I also hope it isn’t true 🤦‍♀️#VanPoli https://t.co/yFQEYdVMHj

Earlier this year, the BC Coroners Service reported that 2020 was British Columbia’s worst year yet in terms of lives lost to toxic illicit drugs.

During a press conference, Chief Coroner Lisa Lapointe said there were 1,716 deaths due to illicit drugs in 2020 in the province, representing a 74% increase over the number of deaths recorded in 2019 (984).

Daily Hive has reached out to Mayor Kennedy Stewart’s office for additional comment.