Jean-Claude Van Damme is back in action and this time he’s fighting for his kidney in Pound of Flesh.

Like many of his other films throughout the years, JCVD gives us another action film that reaches the depths of crapola where it makes B-movies look like Oscar contenders.

At 54-years old, Jean-Claude ceases to be expendable and has survived doing very low budget films with story lines that include him doing the splits. Not to mention he can still throw a great high kick.

Many of us choose to remember him as Frank Dux in Bloodsport and so I don’t care how many shitty movies he does, he’s still one of the best action stars of my generation.

However, just when you thought he was coming into his own with 2008’s JCVD, he goes back to his roots for another poorly written action abomination. 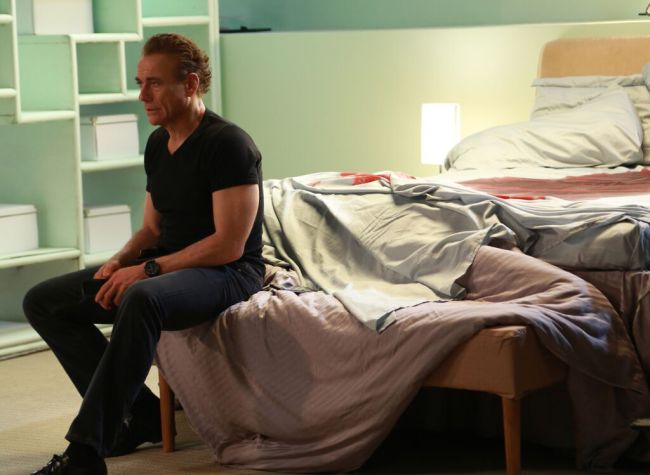 Pound of Flesh is about a former black-ops agent named Deacon who was scheduled to donate his kidney to his dying niece. However, the night prior, Deacon helps a damsel in distress and wakes up the next day in a tub of ice water, a nasty headache, and a missing kidney. Now that’s a hangover.

Of course he is stitched up and pissed off and it’s a race against the clock as he has ten hours to save his organ and his niece. So of course he leaves a trail of Van Dammage in his wake as he and his brother look for the organ thieves.

The film deals with the issue of the illegal organ trade in the Philippines… well, it tries to but fails miserably. That said, I had the chance to ask “The Muscles from Brussels” about his thoughts about black market organ harvesting and he had this to say (insert your heaviest French accent when reading):

You a guy who work all of his life and you have money. Suddenly, a kidney malfunctions. Who wants to die?  I don’t want to die and if I have the money to get something into my body to live and to see my children another 10 years, I would love to. How you get that? Some people buy it. It’s coming from the black market.

So what’s my reaction? Killing people for another organ, no good. People giving organ, being able to live with the other one, it’s good. Having the cojones to give something out of you to help people, it’s love. You have to be strong. So it has all mixed emotions.

It’s a big business. From India, to Pakistan, to those poor countries where people have to give away a piece from from them to be able to put food on the table. So we’re lucky in North America. People should complain much less about the US of America and Canada…much less.

The film has an interesting premise but the fight scenes are slow, the acting is bad, and my God the continuity is horrible. It’s just a sloppy film all around and there really isn’t much more to say about it.

It’s nice to know that Van Damme still has it when it comes to action scenes and stunts but I would love to see him take on better quality work.

He is currently filming another chapter to his 1989 action film Kickboxer called Kickboxer:Vengeance with the likes of former UFC champion Georges St-Pierre, Dave Bautista, and Gina Carano. So maybe this will be another chance for him to kickstart his career and provide Van Damme with opportunities to do better quality action films. But I’m not holding my breath.

Pound of Flesh only gets 1.5 rain drop out of 5. Unless you are a hardcore JCVD fan, then there is no reason to burden yourself with this mess.

I, like many, still love Van Damme and I hope that before his career is over that he gives us better quality martial arts flicks, as he is still a legend in the annals of our VHS collections.