Look at those eyes, those eyes care about making the world a better place, and those eyes belong to Jason Priestley, who is personally asking you to help him with his Clean Water Campaign.

Sometimes its scary, when you choose to look around at the ways of the world, and decide to try to make a small difference in the face of a big problem – which is exactly what the former star of Beverly Hills 90210, is doing as ambassador for this cause.

Imagine on one end, disgusting, grimy, disease-causing water as the only option, pulled up from the bottom of a hole in the ground and drank for the sake of survival.

Then the tug of thirst, your hand on the tap, a quick turn and cold, clear water pours into your glass, not a second glance, not a second thought.

There is something that can be done to bring the two extremes closer together.

Now, a partnership between Procter & Gamble and Walmart Canada are looking to eliminate water pollutants by delivering packets of purifying powder to countries in need, that cleanse up to 10 litres of water.

They want your help in providing 25 million “days” of clean drinking water by March 2015, and here’s how: continue doing exactly what you’ve been doing.

For each P&G product you buy at Walmart or Walmart.ca, they will donate one day of safe drinking water for a family in a developing country.

You get your Febreze and someone gets a glass of clean water.

So here I am, sitting with Jason Priestley on the 5th floor of this beautiful building in Vancouver – and I’m wondering… don’t all celebrities just reach into a giant punch bowl of causes, pull one out and say “I think I’ll endorse this one?”

Don’t they too have something to gain?

So let’s investigate this for a moment. Jason Priestley’s character Brandon Walsh of Beverly Hills 90210 is a figure of the past, unfamiliar to many now but not entirely forgotten. The fame he achieved during that time may not necessarily be duplicated, or ever be cause for revival, but instead of sitting around and hoping for more, he is going out and doing more – for his career and for the world.

So who is Jason Priestley to the new generation if not Brandon Walsh?

Jason: I grew up in Vancouver, I live in LA, where I have the luxury of going to my tap and I have clean, safe drinking water at my fingertips 24 hours a day, 365 days a year.

Once P&G laid out those statistics to me, I couldn’t help but get involved in this initiative because I feel like, its 2014, how can there be a billion people in the world not have access to one of the things that here in North America we take for granted and have an abundance of?

Nicolle: You recently returned from the Dominican Republic to deliver the water purification packets… but I want to know how it felt when you came back, after seeing the effect that this clean water had on communities. What does it do to someone who can no longer claim to be unaware? 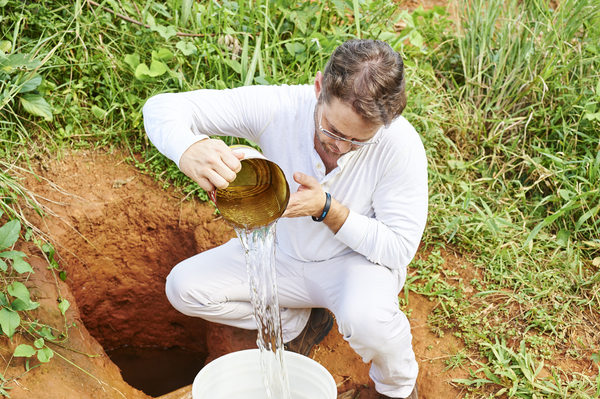 Jason: It motivates you to try to do more. When you see it firsthand, you realize just how overwhelming it is. It’s huge, because to fix it requires so many levels of government, international aid, and so much infrastructure, there is so much that has to happen.

That’s why the simplicity of this program, on some many levels, makes it so easy and so effective.

Nicolle: It blows my mind though that something so simple like this *points at packet sitting on table* could have taken so long to get here, I mean, don’t you find that fact alone fascinating?

Jason: It IS fascinating. But… we have an opportunity now to hopefully make a difference and to help these people.

They just started distributing these packets to people in the Dominican Republic when I was there, and we were showing people how to use the packets…one of the women told us that she had a parasite and for years she didn’t know what was wrong with her, and finally, after just starting to use these packets, finally, she was starting to feel better, and didn’t have a stomach ache all the time.

And it changed her life.

She could clean the water that was coming out of the well on her property. And these people, they are so… sweet.

The well that everyone in the neighborhood got the water from was on one person’s land and everyone came and they shared the water with everyone else.

If that was somewhere else, people would build a wall around it to protect their well.

But there, everybody just walks down the little trail and gets the water.

Nicolle: And now that water is also clean, but returning from something like that, it’s hard not to feel like you were bludgeoned on the side of the head by the reality of the way things are. It’s hard to not come back with a sense of despair. Then to have your own kids, and to be aware of the privilege they get, and that we all get, really, how do you instill a sense of belief in them that they can make a difference, or that we can all make a difference. To have seen the things that you have seen, you almost have more responsibility to pass that message on.

Jason: Think globally, act locally. If you look at the whole picture, it’s too overwhelming and you cant even think about where to start. You have to look at a smaller piece of the pie and say ‘I can take a little bite of that.’

I think with this program, you don’t do anything outside of your normal activities, and that’s what I like about it.

Nicolle: The easier it is, the more likely people will do it…

Jason: Exactly, if you make it easy for people, and the good thing about this program is that there are big corporate partners involved and that makes it easy for people, and I use this whole thing as a really teachable moment for my kids to teach them about the value of water and how important water is, how you have to protect it, how you shouldn’t waste it, how lucky we are, and really, to treat water as a precious resource. That’s what I have been teaching my kids.

Nicolle: Did you drink the water yourself after putting the packet in it?

Jason: It takes about 30 minutes and you have to stir it, then you see all the contaminants in the water and they actually turn brown and coagulate and go down to the bottom. Then you strain the water through a piece of cloth, and then you have to let it sit for about another 10 minutes.

Its good though, it has a slight chlorine taste but really no different than the tap water in Los Angeles. 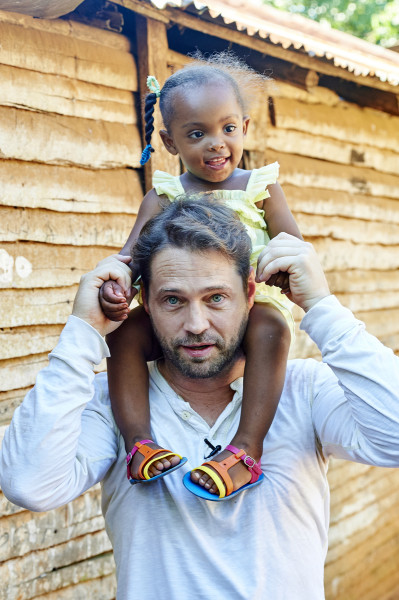