These days, everything you hear or read says the Canucks need a top-six forward if they’re going to make a deep run in the playoffs this year.

The second line of Ryan Kesler, Chris Higgins and Mike Santorelli is flying – putting up a combined 28 points over the 12 games in December – but the Canucks need another legitimate scoring line to share the burden.

What kind of player do they need to spark the Sedins?

A 25-30 goal guy? A smart player can fit into their cycle and go to the right places and produce consistently?

Those players aren’t easy to find.

But hold on a second: Alex Burrows is one or two games away from returning to the lineup. Burrows, who scored at least 25 goals every year from the 2008-09 season to the 2011-12 pre-lockout season, is exactly, and all this team needs.

The Canucks will have two stellar scoring lines. And with Jannik Hansen dropping to the third line, and the fourth line (which has looked better lately) bolstered by Zack Kassian or David Booth, all of a sudden the Canucks will be looking solid up front.

I can hear you telling me Burrows has zero goals this season. He’s lost his touch, he doesn’t have it anymore.

A look at the stats, though, shows he has it more than ever before:

His Corsi and Fenwick numbers put him in the top three on his team for shots generated vs. shots allowed.

All this means he and the Sedins were playing very well together, and he simply wasn’t getting the bounces. But they’ll come – they always do when you’re doing the right things. And January could be a month for Burrows to remember.

The Canucks are back on track – who could’ve known?

I don’t know if you read any of the drivel I write here, but if you do, you might remember I wrote a post right after a six-game slide in November where the Canucks went 1-3-2. Here’s what I said near the end:

The Canucks are about to start scoring a lot more and winning a lot of games. Get on the wagon before it fills up.

In my Canucks December Wallpaper post, I wrote something similar, and added some fancy stats (read the post for this) to back it up:

The Canucks have been playing better lately, outshooting and outplaying the opposition on most nights. Looks like the Canucks are getting it. If they play the same throughout December, it could be a month to remember.

I’m not trying to say I’m a fortune teller or trying to gloat here. Back in November, I did what every hockey fan should do if you want to know how good your team is – look at the way the team is actually playing, rather than the scores from previous games.

The Canucks were playing well, but had a crappy November. In December, the work paid off.

Hey, did you see what I wrote about Alex Burrows above?

And now for this month’s Wallpaper: 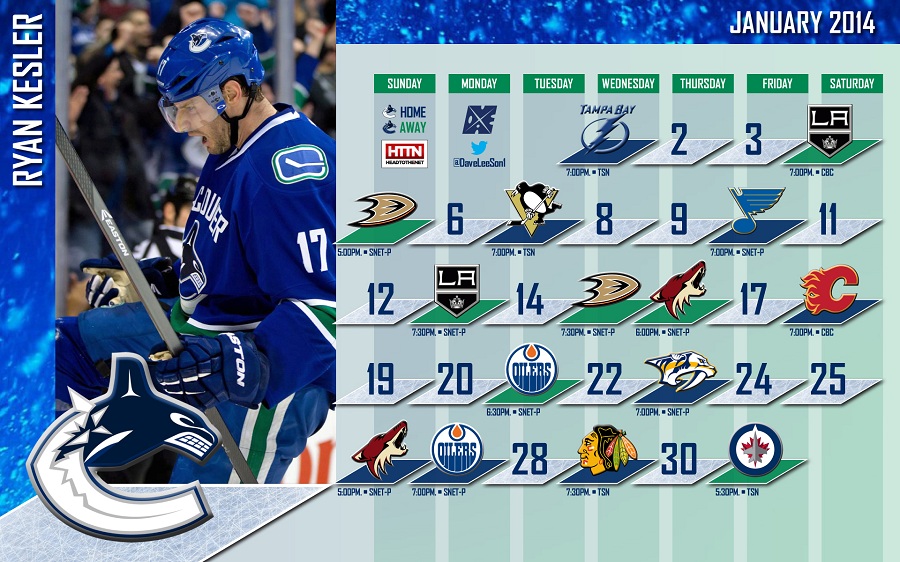