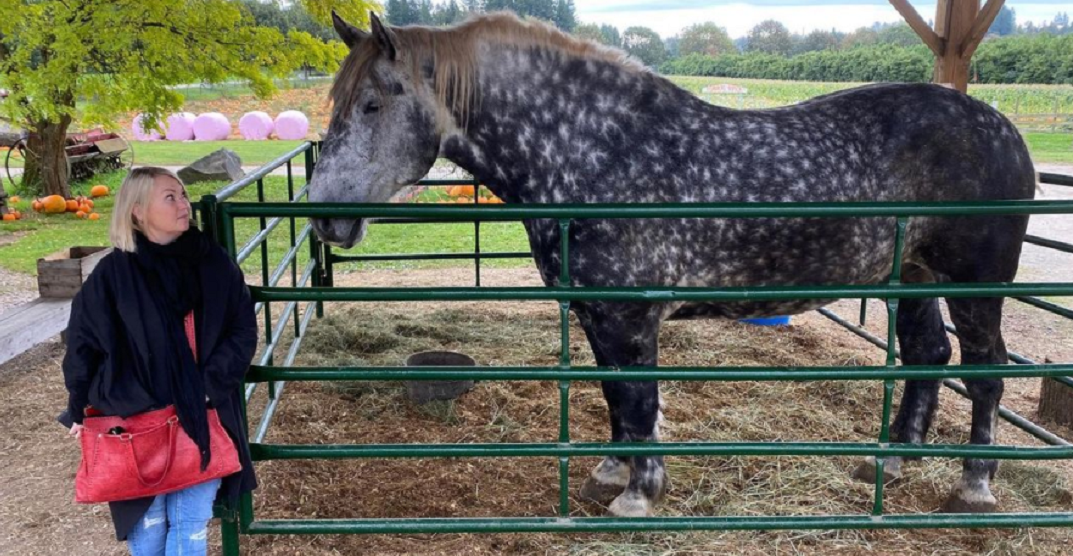 November 14 update: More information has been added from the Government of Canada.

Canadian singer-songwriter Jann Arden is bringing attention to one of Canada’s lesser-known exports: live horses for slaughter and consumption.

Arden recently shared a video posted on social media by Lisa Pitts showing what appears to be rows upon rows of crates containing live horses waiting to be loaded onto a Korean airplane at the Calgary International Airport on November 11.

The shipment shown in the video happens every two weeks, Arden says, flying roughly 90 to 100 horses overseas to Japan, where they are beaten, slaughtered, and eaten raw as a delicacy.

Arden noted that she’s been to the airport to see the horses loaded into the crates in the early hours of the morning and, in her words, “it’s fucking terrifying.”

“It just needs to end,” she said in a phone interview with Daily Hive. “Watching them load the horses, hearing the sounds that come out of their lungs. It was probably -12°C when that film was taken. They do it all winter long, so it can be 40°C below with wind chill and they’re standing in these crates. When you see them not able to lift their heads, when their heads are tipped down because of the netting, and they start making these moaning sounds… it’s something I’ll never forget as long as I live.”

The breeding of horses for export and consumption had been seen in the United States until 2007, when outcry from the public pressured the government to cancel the funding of horse slaughterhouse inspections, effectively sidelining the industry.

However, she states that those who had been breeding and selling draft horses in the United States simply moved their operations north to Alberta and that it’s only a small handful of farmers partaking in the operation.

“Five guys should not be getting rich [from this]. This is not farming to table, this is not feeding Canadian families, and it’s not feeding Japanese families; it’s feeding a bunch of elitists that can afford USD $100 to have horse sashimi.”

The musician has been working with the Canadian Horse Defence Coalition (CHDC) for over half a year to put an end to the niche industry and has plans to launch a new campaign to revitalize the fight.

The campaign, aptly named #Horseshit, plans to feature a new website, donation page, and social media presence in an effort to bring awareness to the ongoing treatment of these animals.

The travel conditions, as well as the feedlots where the horses are raised, are inhumane and cruel, argues the CHDC.

The coalition has been advocating for the humane treatment of horses since 2003, and director Loni Stewart noted in a phone interview with Daily Hive that Arden’s involvement is “what the horses have been waiting for.”

“The horses have been needing somebody like this, so now they have their champion.”

Stewart noted that everything from the breeding to the transport to the testing done by the Canadian Food Inspection Agency is lacking, to say the least.

According to the Government of Canada’s website, the CFIA tests the animals for Phenylbutazone, or “bute,” which is an anti-inflammatory and pain reliever used to treat lame horses and is not approved for use in food-producing animals.

“The testing for that is not very thorough, to the point that a lot of times the testing down in the European union will discover bute in the horse’s system,” said Stewart.

“It’s such a many-layered trade and industry. Every time you turn over a rock, something awful comes out that’s new and you’re stunned by it.”

The CHDC has launched legal action against the Canadian Food Inspection Agency in an effort to put a halt to the dismal transport conditions at least but lost the case last December. The Vancouver-based animal rights lawyer representing CHDC, Rebeka Breder, has since filed an appeal.

Breder stated in a phone interview with Daily Hive that the lawsuit is not suing the Government of Canada for damages, but is instead attempting to hold it accountable to abide by its own laws.

According to Breder, Canada’s Health of Animals Act states that veterinary inspectors must certify that shipments of animals comply with the law, including requiring separation of horses over 14 hands in height — which is anything taller than a pony — and that horses have enough room between the tops of their heads and the tops of the crates.

The CHDC is arguing that the shipments of horses from Calgary to Japan fail on both those accounts, as they have witnessed horses being loaded four to a crate with their heads touching the netting that acts as the top of the crate.

“We’re saying that they’re in breach of their mandatory duty to inspect and certify by allowing the very blatant violation of the segregation and headroom requirements,” said Breder.

“What the lawsuit is saying is that the government has passed laws, and the government — just like every other person, organization, company — has to follow its own laws,” she said, “and right now they’re skirting around it.”

Breder and CDHC have filed their argument for appeal and are waiting for the government’s response. They hope to go to a hearing before a panel of judges sometime in 2021.

Daily Hive reached out to the Calgary International Airport but did not receive a reply by the time of this article’s publication.

A representative from the CFIA directed Daily Hive to the Government of Canada’s “live horse exports to Japan – know the facts” page, which states that “CFIA veterinary inspectors are present for each air shipment to certify the export as required by the Health of Animals Act.”

The page also noted that the total allowable travel time for horses being transported from Canada to Japan without feed, water, or rest is 28 hours, which was brought down from 36 hours in February.

According to the Government of Canada, 39,000 horses have been transported to Japan from Canada since 2013, and the CFIA is only aware of five deaths during air shipments.

Arden says that she plans to fight for the proper treatment of these animals for as long as it takes.

“This is a hill I’m willing to die on, so I’m never going to stop. I’m just not going to stop doing it,” she said.

“I’m going to drop dead at some point — that’s what happens to people — but I am going to be on the right side of this.”