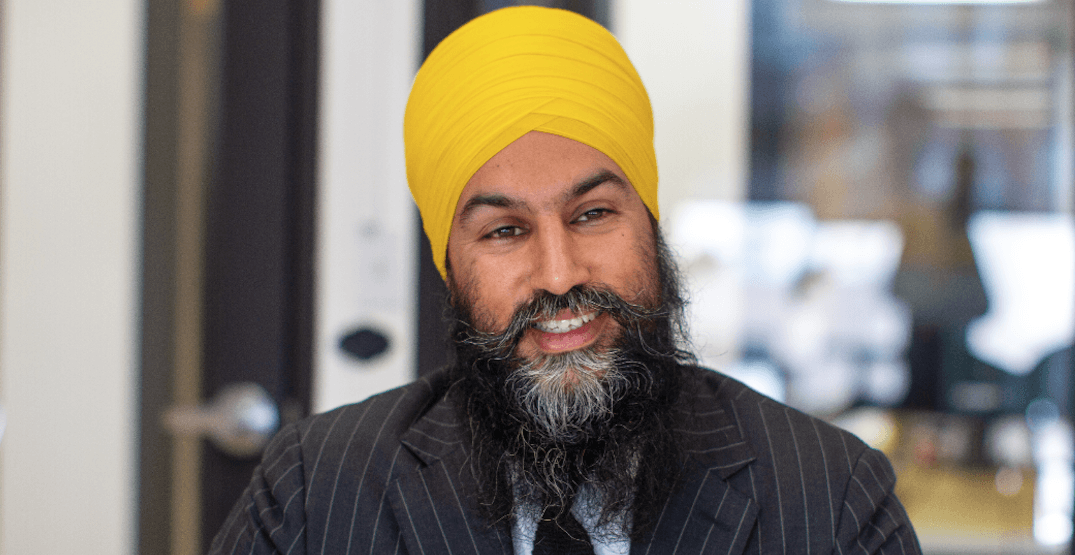 While Jagmeet Singh’s win in Monday night’s by-election in Burnaby South was cause for celebration for both him and his supporters, the federal NDP leader also knows that the work isn’t over yet – in fact, it’s very much the opposite.

With a seat now secured in the House of Commons, Singh is turning his attention to the next federal election – just eight months away – with his eyes on the ultimate prize: becoming Prime Minister of Canada.

In a sit-down interview with Daily Hive on Tuesday, Singh said Canadians will make a choice about the future of their country this October.

“We’ve got eight months and there’s a choice that’s going to be made, and I really want to sharpen that choice,” he said. “We have lots to work on, we have a lot to build on and there’s more work to be done for sure.”

And while the Burnaby South riding favoured Singh, he knows that the campaign is by no means going to be a cakewalk – a fact highlighted by results of the by-election in Quebec last night as well – where Liberal candidate Rachel Bendayan managed to steal the Outremont seat, a longstanding NDP stronghold, and former riding of party leader Tom Mulcair.

For his part though, Singh seems unfazed by this.

“We always knew Outremont was going to be a tough seat for us,” he said. “But what we saw is a significant amount of support for the NDP.”

There’s still a “strong base” to build on in Quebec, Singh said.

“We learned that there were a lot of people in Quebec concerned about decisions that this government has made,” he added.

As such, the NDP leader said he’s planning to visit Quebec next week to lay out his plan “for our offer to Quebec and how we’ll recognize what we’ve built, the dream that Jack Layton started and how, as a leader, I want to continue that dream.”

With the federal election campaign already ramping up with extremely divisive rhetoric, Singh spoke about how his ideas of love and courage play into the country’s political picture, noting that people shouldn’t mistake these ideals as weak or fragile.

“Love and courage requires the courage to call out what’s not working – to call out the injustice,” he said. “The unfairness of seeing the Liberal government give so much preferential treatment to those who are already powerful and well-connected and love requires us believing in the idea that we can come together and care for one another – so you’re going to see both.”

At the end of the day, he said, “the goal is going to be to criticize or challenge something with the goal of saying ‘that’s not working, but this will work.'”

So does this mean no negative attacks ads?

“I don’t like negativity,” said Singh. “I like constructive criticism and pointing out the flaws for purpose of choosing the right way.”

During his victory speech on Monday night, Singh said that as a kid, he could “never imagined somebody like me running to be prime minister.”

On Tuesday, he expanded more on exactly what he meant by these remarks.

“If you had asked me as a kid, ‘what does a prime minister look like?’ I would have had a certain mental image of a prime minister and then if you asked me, ‘can you do that?’ That mental image would not have included me,” he said. “I know that the only reason why folks like myself can imagine doing something is because other people have broken barriers before me.”

Looking forward, Singh said he thinks about people turning on their TVs to tune into the leader’s debate, and what that will mean for those at home watching it unfold.

Maybe, he added, “this will open up the imagination for so many young Jagmeets that may not have thought of themselves as being reflected in being a decision maker, and maybe it’s opened up new doors, and that, to me, is a pretty amazing thing.”

Ready to get going

Singh was Member of Provincial Parliament (MPP) in Ontario, before being chosen as NDP party leader in October 2017. However, he had been without a seat in the House of Commons until last night.

Now, as  he prepares for Ottawa, Singh said he’s excited to get things going right away.

“I’m excited to get into question period to mix it up and to really push this government to do what people need,”  he said. “I want them to hear their voice amplified through me, and I want them to know that I’m there to be their champion.”

Singh said there’s currently “a lot of fear and uncertainty and it’s being misdirected by some people and used to blame people who are not responsible – but I think that the frustration and anger is very valid.”

What he’d like to see, is “that anger to be channelled towards those who are responsible, and I want to channel that frustration into hope and into conviction for a better future.”

He also wants people to know that if we “can hold those responsible to account in conservative or liberal governments, we can also make better choices and we can fix the problems that we’re faced with. We can do so much.”

Canadians go to the polls this October.