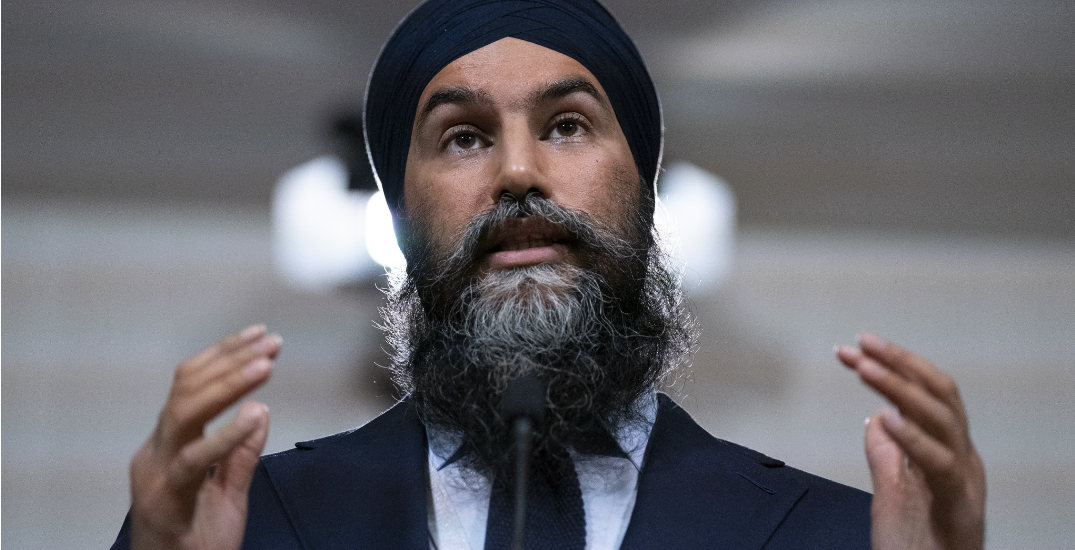 NDP Leader Jagmeet Singh honed in on the billions of dollars of potential revenue lost to corporate loopholes and tax evasion at a campaign stop Sunday as he accused Liberal Leader Justin Trudeau of doing nothing to address the issue.

Speaking in Sudbury, Ontario, Singh said that he understood why many people in Canada are angry and frustrated about the economic system.

Singh said Trudeau hasn’t done enough about the problem, while the NDP has committed to making it harder for corporations to shift profits to tax havens. The party has also pledged to increase annual funding to the Canada Revenue Agency by $100 million to go after tax cheats.

Parliamentary budget officer Yves Giroux’s analysis of the proposal estimated the measure could bring in just over $2 billion over five years, but noted the CRA may not be able to make use of the new cash quickly given increased funding over the last decade.

The Trudeau Liberals have added close to $1.9 billion in budgeted funds between 2015 and 2023 to go after tax evasion and aggressive tax planning, which the government has estimated will bring in $13 billion in additional revenue.

And while the Liberals have yet to do so, the party’s platform also commits to modernizing tax rules around how much companies can shift profits abroad, as well as restricting federally regulated entities from using certain structures that allow them to shift earnings to low-tax jurisdictions.

Singh said he doesn’t believe Trudeau will follow through with those commitments.

“I believe very strongly Trudeau has no intention of closing these loopholes,” he said.

The NDP has proposed to increase the proportion of capital gains taxed on the earnings of wealthy individuals from 50 to 75%, increase the top marginal tax rate by two percentage points, and implement a 1% wealth tax on those who have more than $20 million in household assets.

The measures are important to help fund the NDP’s plan to increase spending by $214 billion over the next five years on areas like health care, climate change and reconciliation, as the party outlined in a costed platform released Saturday.

“One of the fundamental things that we want to do, so that we can actually bring in these social programs, is to make sure we’re making the super-rich pay their fair share. So that’s one of our top priorities, that’s really a signature of what we’re offering as New Democrats,” Singh said Sunday.

An independent analysis released Sunday by the Institute of Fiscal Studies and Democracy at the University of Ottawa questioned whether the revenue-generating parts of the platform would work out as Singh suggested.

The institute, headed by former parliamentary budget officer Kevin Page, noted in its analysis that things like a wealth tax have higher degrees of uncertainty, and flagged the $9-billion in contingency funding the platform provides against the risk of forecast errors.

While campaigning in Candiac, Quebec, Trudeau said that while the Liberal party has increased taxes on the wealthy and gone after tax cheats, there are limits to how far those policies can go.

“The idea that you can go with unlimited zeal against the successful and wealthy in this country to pay for everything else is an idea that reaches its limits at one point, and I don’t think the NDP get that,” Trudeau said.

Singh said the comments showed the limits of Trudeau’s vision.

“I’m not surprised that he said, oh, limit your hopes and aspirations around making sure the billionaires pay their fair share. I’ve long been saying he’s been defending the super rich, he’s on the side of the billionaires, and that’s just more evidence of it.”