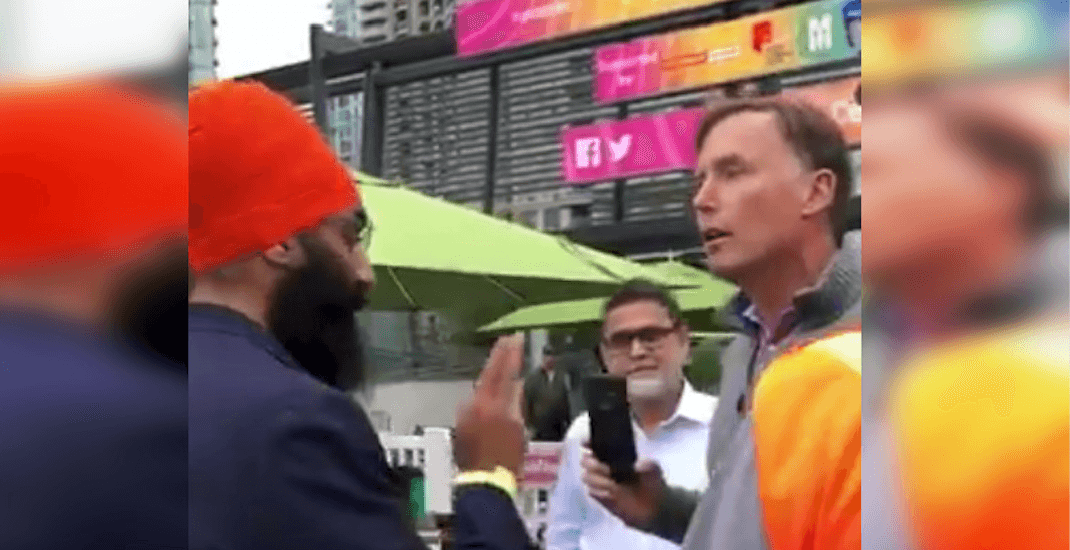 Federal NDP leader Jagmeet Singh said he is “proud” of the way his brother and fellow politician confronted “hate” while attending MuslimFest in Mississauga over the weekend.

Ontario NDP MPP for Brampton East, Gurratan Singh, was captured on video confronting a man demanding to know if he supports “Sharia law” and telling him that “Islamophobia was created by the Muslim Brotherhood in 1990.”

“We don’t need that kind of racism in Canada,” says Singh.

“What about Sharia? Political Islam. You’re hiding buddy,” replies the man who has been identified as Stephen Garvey, the leader of the National Citizens Alliance (NCA).

The NCA is a registered federal political party that describes itself as “anti-globalist” and “pro-Canadian.”

“I despise people like you,” Garvey tells Singh. “You’re full of crap, buddy.”

Singh shared the video of the incident on his Twitter account, crediting his brother, Jagmeet, for teaching him to “always confront racism.”

“I will never respond to an Islamophobe by stating, “I am not a Muslim.” Instead, I will always stand with my Muslim brothers and sisters and say hate is wrong,” wrote Singh, a devout Sikh.

My brother @theJagmeetSingh taught me to always confront racism.

I will never respond to an Islamophobe by stating, “I am not a Muslim”.

Instead, I will always stand with my Muslim brothers and sisters and say hate is wrong ✊🏾. https://t.co/MaBPc3sBb1

He later posted another video further explaining the incident.

Thanks for all your love & support, I am truly humbled

But this is bigger than one person & one single event

It’s about the rise of Islamophobia, racism & hate

“As I was speaking on stage, I noticed someone was getting very angry and agitated as I spoke. When I exited the stage I saw him push through security and walk right up to me and start to spread so much hatred, negativity, and Islamophobia,” he said.

“Immediately my heart went out to all the young volunteers around me and thought of how much they must have felt hurt by hearing someone spread so much hate. Immediately I thought of the lesson that my brother taught me. That anytime we are faced with racism, we must confront it.”

On the NCA Facebook page, Garvey posted longer video footage he filmed while at MuslimFest, including his confrontation with Singh.

The video shows Garvey walking around the festival grounds and eventually approaching the stage where Gurratan Singh is speaking about Islamophobia, Quebec’s Bill 21, and the political conflict in Kashmir.

“This guy’s a loser up there,” Garvey yells. “He’s connected to Jagmeet Singh. What a loser party the NDP is. Afraid to speak the truth about political Islam.”

When Singh leaves the stage Garvey says he is going “to find” him.

“Where the hell is that loser?” he asks.

Event volunteers appear to open a pair of gates for Garvey allowing him to approach Singh about his speech.

Garvey’s footage shows him continuing to yell at Singh after he is being escorted away from the scene. A man accompanying Garvey proceeds to call Singh’s brother, Jagmeet, a “terrorist.”

In a separate Facebook post, the NCA said Garvey “approached Singh to challenge his political correctness and pandering to ethnic minorities and their interests abroad.”

“Stephen did not utter a single racist remark and did not say anything derogatory about Muslims, Sikhs, or any other group. There was no applause as the media pretends. And no Canadian regardless of status should be beyond criticism, and especially a political representative.”

Federal NDP leader Jagmeet Singh responded to his brother on Twitter saying he was “proud” of the way he handled the situation.

I’m proud of you brother. When hate is allowed to grow, it spreads & consumes everyone. That’s why we must always call it out.

And at the heart of hate is fear – and only love can conquer fear.

That’s why it’s so important that we take better care of each other. https://t.co/GPPTlvsA37

“When hate is allowed to grow, it spreads and consumes everyone. That’s why we must always call it out. And at the heart of hate is fear – and only love can conquer fear. That’s why it’s so important that we take better care of each other.”

In 2017, Singh made headlines for the way he calmly handled a heckler who interrupted him at a speaking event, asking him when his “Sharia is going to end.”

“We don’t want to be intimidated by hate, we don’t want hatred to ruin a positive event,” Singh told the woman. “We welcome you. We love you. We support you, and we love you.”