Last week, several major networks offered lower than usual wireless rates for a limited time. A welcome surprise for many Canadians who have been paying way too much on monthly plans.

And our monthly plans are high.

According to an annual report commissioned by the Department of Innovation, Science and Economic Development (ISED), Government of Canada, and prepared by Nordicity Group Limited, Canada pays some of the highest wireless rates in the world.

Comparing prices with seven other countries, Canada was consistently among the highest in terms of mobile costs.

The International Price Comparison looked at the costs in the US, Italy, Japan, Germany, UK, France and Australia. For the purpose of comparing international price data, foreign currency prices were converted to Canadian dollars, as of May 2017.

Some good news from the report, low-use mobile wireless plans were cheaper in Canada than in the US for the first time since 2013. But that’s about it for good news. Here’s how Canada ranked in comparison to international mobile plans.

Canadian prices were the second highest followed by the US.

Canadian wireless costs were the highest, followed by by Germany and the USA.

And once again, Canadian prices were the highest, followed by Germany and Japan. 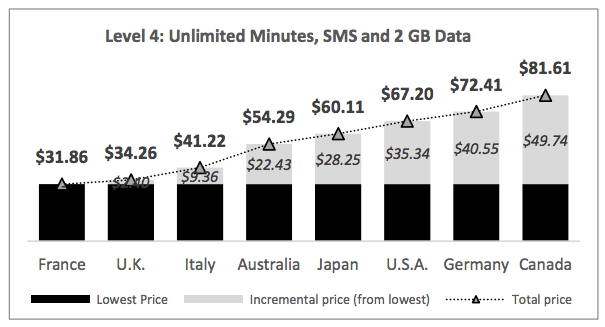 And another one where Canadian prices were the highest, this time followed by Germany and the USA.

Canadian prices are lower in this category coming in the second highest, after the US and followed by Germany.