As we continue our look at gentrification in Vancouver, we set our sights at the one street that is poised to benefit most from the next boom, Fraser Street.

Home to such wonderful establishments like Les Faux Bourgeois, and a few other places the street is a busy hub of activity during the day. However, at night it’s a bit different, much like most of Vancouver outside downtown it’s quiet, save for the packed house at the 24 hour Breka Bakery. Although this will eventually change as the city grows up, the Olympics were the first test of this and it appears Vancouver finally is ready to leave the house at night.

Fraser Street is on the cusp of change, however, it has a long way to go because as of right now it’s mainly home to single family residential. Sure there are certain density clusters that have pedestrian activity, the defacto hub would have to be 49th and Fraser as it is by far the busiest intersection. After that you have of course King Edward and Fraser, which has so much potential. Currently the King Edward Stretch is best described  as Little Manilla with some Polish mixed in sprinkled with a few Little Vietnam outcasts from Kingsway and of course this being Vancouver throw in a little Chinese action for good measure. 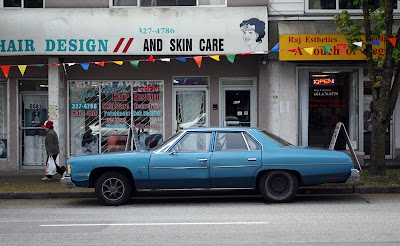 Fraser Street much like the rest of East Vancouver is heavily ethnic. Gentrification will bring in young professionals and the influx of Caucasian people from the west side, but I don’t think it will be a complete white wash. After all, this isn’t Kitsilano.

Last time around Mount Pleasant and its epicentre Main Street definitely felt the change. House prices shot up and it brought about more investment from the local citizens. Heck even Hazel and Co. owner opened up shop on Main, after she received that gratuitous reward from the judge. Will the same happen to Fraser, only time will tell. It has all the right ingredients.