A major annual triathlon event as a part of the international Ironman series, with 2,500 athletes from around the world and thousands of spectators, could be coming to downtown Vancouver beginning next summer.

According to a Vancouver Park Board report, Ironman is proposing to host a renewed Vancouver Triathlon event in July 2016 on a Sunday, in an effort to mitigate potential traffic impacts when such large-scale races are held on major roads.

The race will begin with a 1.5 km swim in Coal Harbour just west of the Vancouver Convention Centre’s West Building. It will then transition into a 40 km bicycle ride that will require the closure of some Coal Harbour and Stanley Park roads from 6:30 to 11:30 a.m., including the Stanley Park Causeway.

The last portion of the race will be a 10 km run along Beach Avenue and North Lagoon Drive, with athletes completing two-and-a-half laps, before crossing the finish line near Jack Poole Plaza. As with all triathlons, there are no breaks between the phases of the race.

The report also notes the potential tourism spinoffs of the new and improved triathlon as it could generate 7,000 hotel room nights; it could bring 10,000 visitors based on Ironman’s data that each athlete typically brings between three to four guests to such competitions.

In 2014, Ironman acquired the Subaru Vancouver Triathlon held annually at Spanish Banks, Locarno Beach and the UBC Endowment Lands. If the race is successfully relocated to downtown Vancouver, it will be branded as the ‘5i50 Canadian Championships’.

Ironman hosts 190 events around the world every year and 22 of these events are held in Canada, including major races in Whistler, Victoria and Calgary.

Vancouver Park Board staff have recommended that the Park Board Commissioners approve the downtown Vancouver race. A decision on the event will be made in a vote on October 21.

A number of running and cycling events are held in downtown Vancouver and Stanley Park every year, such as the Vancouver Sun Run, BMO Vancouver Marathon, Lululemon Half-Marathon and RBC GranFondo Whistler.

If approved, this will be the first time in eight years a globally recognized international triathlon event will be held in downtown Vancouver. In July 2008, English Bay and Stanley Park held the International Triathlon Union’s annual Triathlon World Championship, which was an Olympic qualifier event for the Beijing 2008 Games. 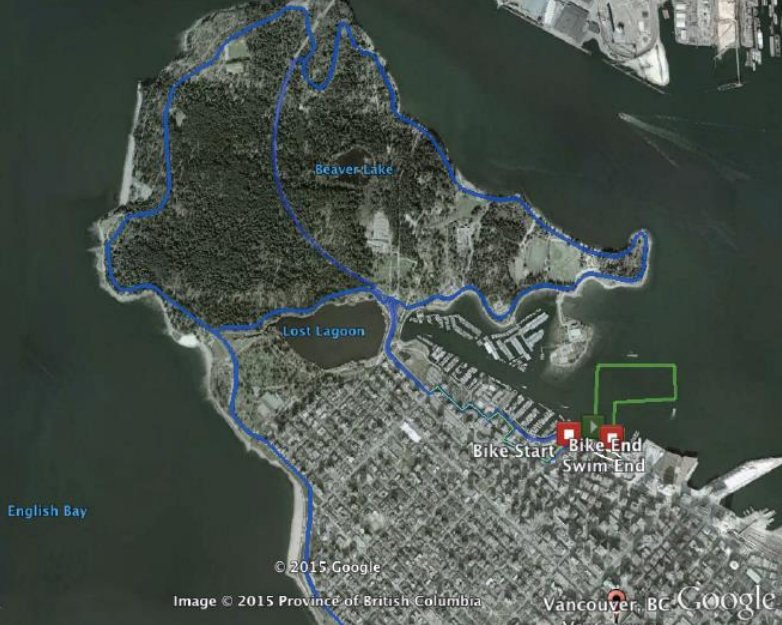