If you’re lucky enough to get one of the seats at the bar inside the converted residence housing Invitro Restaurant, you’ll find yourself very close to the people chef and owner Sarah Kashani holds dear.

A series of bronze nameplates glimmer underneath the bar, right where someone sipping one of the restaurant’s cocktails might be pressing their knees. Kashani explains those are the names of the people who have been instrumental in making her dream of owning a restaurant in Vancouver possible.

Invitro has taken root in the building once home to La Fourchette and Our Place Café. It’s a small space that seats just 25, but gives a vibe akin to the embrace Kashani will inevitably offer you after you’ve had a good chat.

Kashani says the intimacy of the space allows her to meet everyone she is cooking for, which fuels her passion for feeding her guests. “When I feed people there is a certain sense of just complete pleasure for me making people happy,” elaborates Kashani. 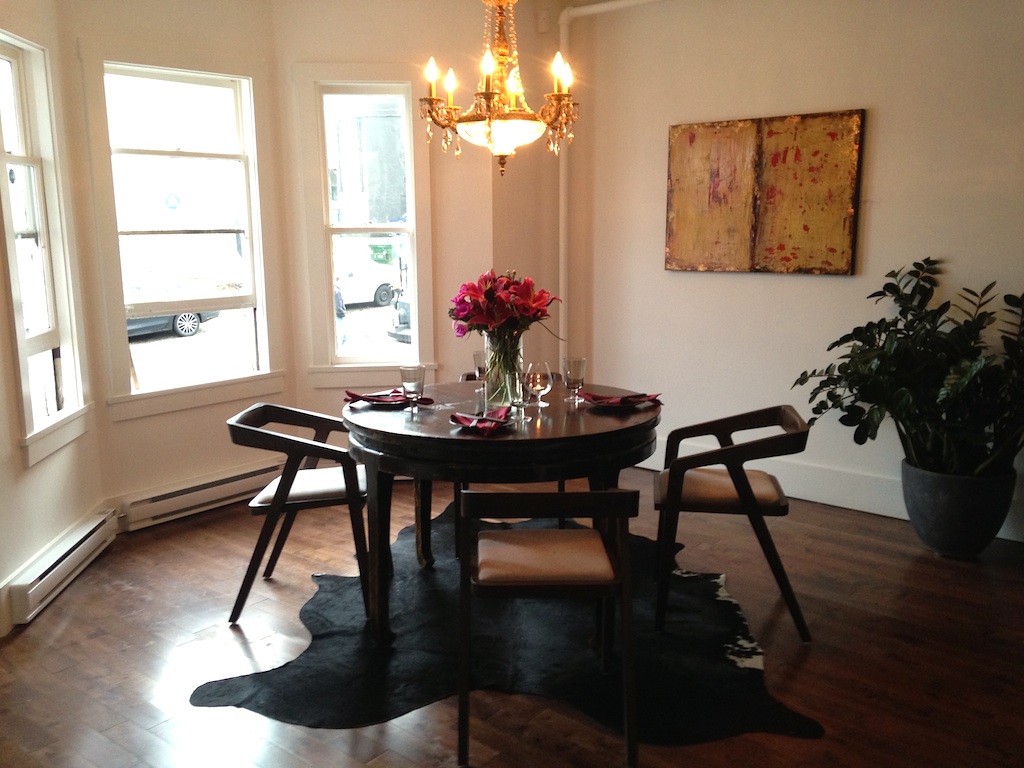 Feeding loved ones has been a mainstay for Kashani since her youth, when she regularly helped put the family meal on the dinner table at their Edmonton home. While many Edmontonian families she knew followed a more straightforward diet of meat and potatoes at the time, Kashani credits her own family’s love of exotic ingredients and fresh fruits and vegetables for instilling in her a love of food from early on.

Kashani says candidly that her sister’s struggle with bulimia is in part what started her on the path to the kitchen and her chef’s whites. Sadly, her sister lost her life to the eating disorder, but Kashani’s experience as a sibling caregiver remains profoundly influential.

“It kind of goes back to the reason I cook,” Kashani says of the role her sister had in inspiring Invitro Restaurant. “I took care of her for the majority of our lives. We had parents who weren’t really there, so I took care of someone who had an eating disorder, real issues around food. The times that I could get her to eat it would melt my heart, and I think that’s why I became a chef.” 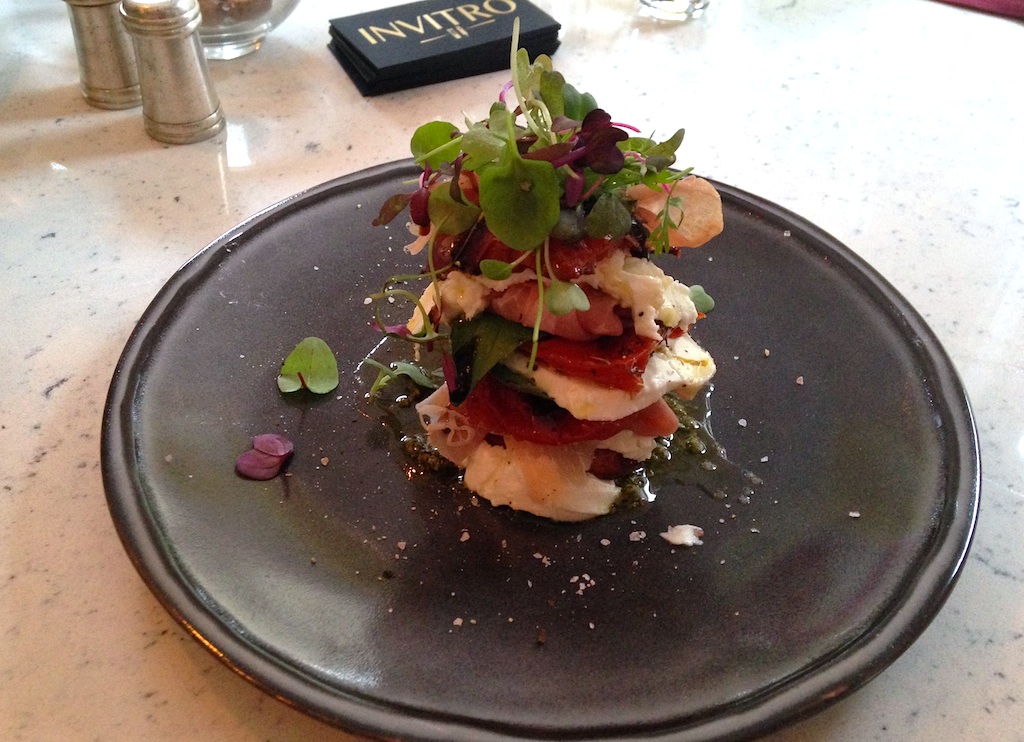 Kashani was drawn to Vancouver in her late teens, and boldly moved away from the family fold to pursue her own dreams. Initially intent on becoming an actress, the onetime nomadic Kashani spent time in New York and Los Angeles, even finding herself in Alabama in a boot camp during Hurricane Katrina, before finally focusing on making her home and her culinary career take root in Vancouver–a city she loves dearly.

For the daughter of an Iranian father, Kashani’s choice to work in the food industry was an unorthodox decision. You can actually taste that rebellion in her dishes. Most enamoured with Mediterranean and Italian flavours, Kashani interprets a dish like a Pasta Bolognese with her own vibrant twist. In Kashani’s version of the hearty, warming, comfort classic served up at Invitro the carrots that are traditionally finely diced and disguised in the sauce instead show up as cheery oversized orange disks brightening up the plate, and letting their sweetness leave a distinguishing punctuation mark on the palate.

Kashani’s touch is truly in every aspect of the intimate dining experience she offers at Invitro, thanks in part to the minimal space and her lean staff. The kitchen has no freezers, and Kashani executes all the food solo, so her menu was designed to factor in the need for fresh ingredients daily, and getting the most out of each ingredient and Kashani’s time.

“There’s no spillage, there’s no waste–I take care of multiple menu items with one kind of ingredient,” elaborates Kashani. It’s no accident there’s been a Pavlova on the dessert menu and egg white drinks among the cocktails, since Kashani is using the yolks to hand make the noodles she serves beneath that satisfying Bolognese and in other pasta dishes. 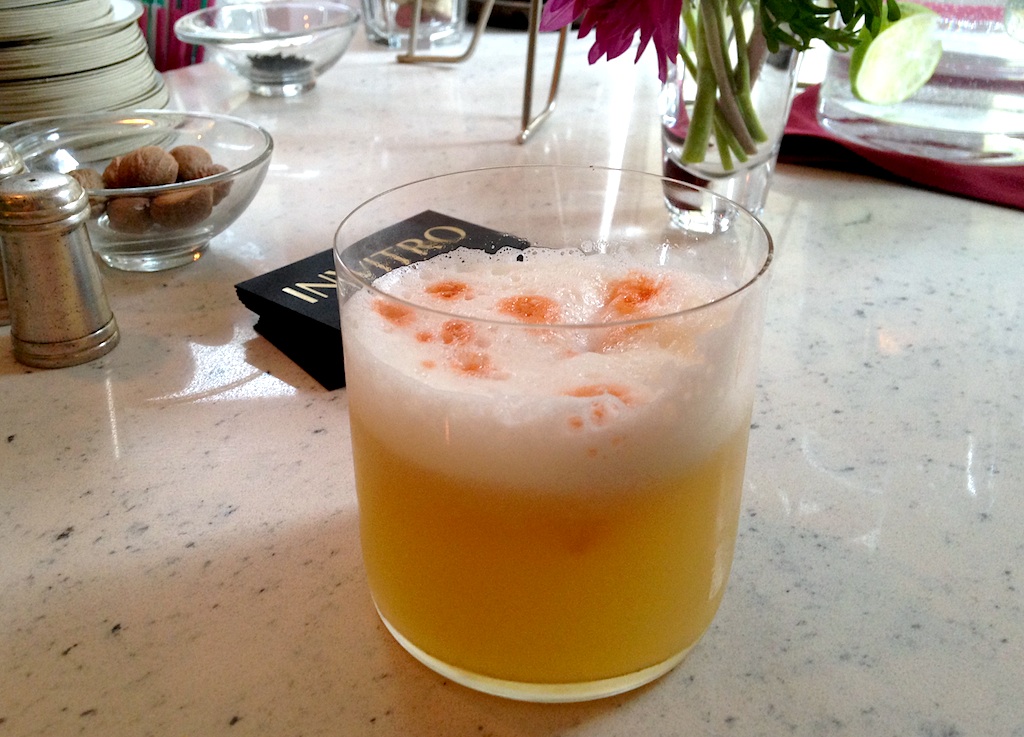 Invitro’s version of a whiskey sour

Being so hands-on with the restaurant is something that started for Kashani months before she opened the doors at Invitro. Kashani’s cellphone still holds photos of the chef working on the old home’s floors, and she can give testimony about the volume of work that needed to be done in the space, which had to be “gutted down to the studs” in order to get it up to code and to evolve into the cozy and inviting restaurant she’s created.

The power of Kashani’s creative spirit is manifested in her food. The jewel-like raspberries and cheery gooseberries studding the mound of whipped white of her Pavlova practically beg to be plucked from their supple nest and popped into your mouth for an instant burst of edible sunshine. On a gloomy late fall Vancouver day the berries are not surprisingly uplifting. 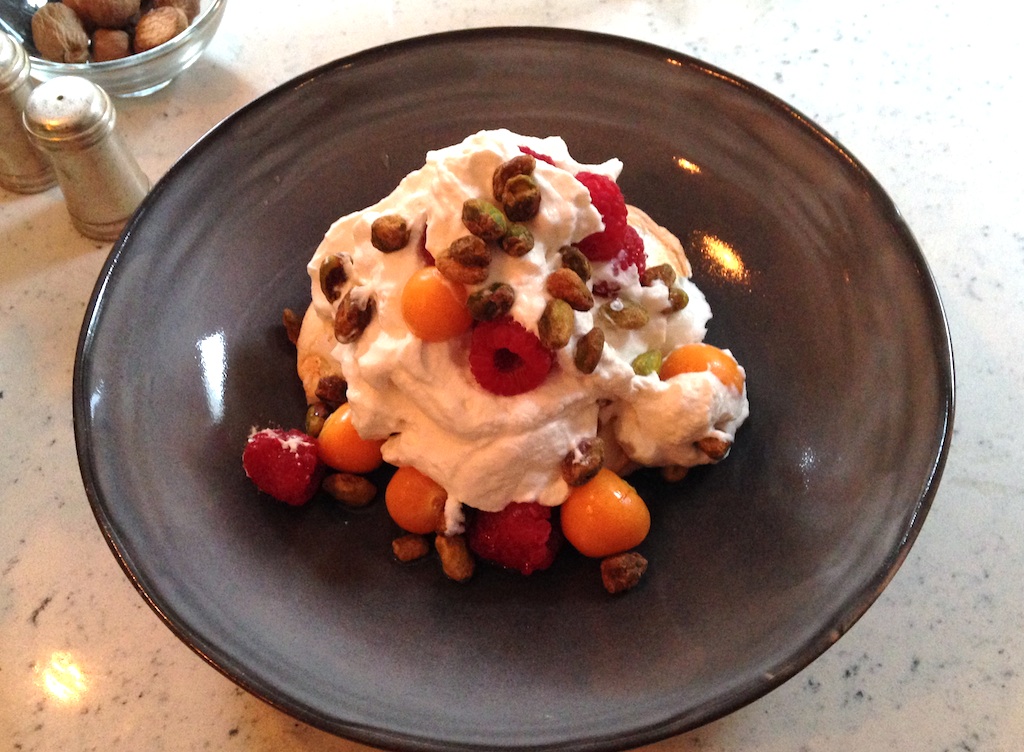 “Colours create emotions,” says Kashani. “To me, food should be a painting, it should be beautiful, because the kind of care and passion you put into it with your hands is going to directly affect the person who is eating it,” continues the chef, who cites as influence the novel “Like Water for Chocolate,” where the protagonist’s emotions were passed through the hands into the food she made.

“It’s the hands that make the difference,” insists Kashani. “At the end of the day–when my story makes you tell a story–the meal is the conversation.”

Kashani is a vivid storyteller, and her joy in connecting with people is evident on her plate, and her caretaker-like approach to a meal in her house. And Invitro is truly her house; she lives there, as does some of her staff. If the food on the plates represents Kashani’s heart, as she attests, a meal at Invitro is like an embrace into the family she’s lovingly built for herself.

“I created my family, I feel like my staff is my family, and it’s a beautiful family because they work so hard, and they care so much,” enthuses Kashani. Many of those adopted family members’ are among those represented on the wall of name plaques, including Kashani’s real relatives, like her profoundly inspiring late sister.

Ultimately, though, Kashani wants to welcome new friends into her home–well, specifically her restaurant–and for them to shed their tensions and spark conversation based on what they’re eating.”I want people in Vancouver to feel like they can come into a nice room, have a great meal, and not feel like they have to break their wallet,” says the restaurateur. 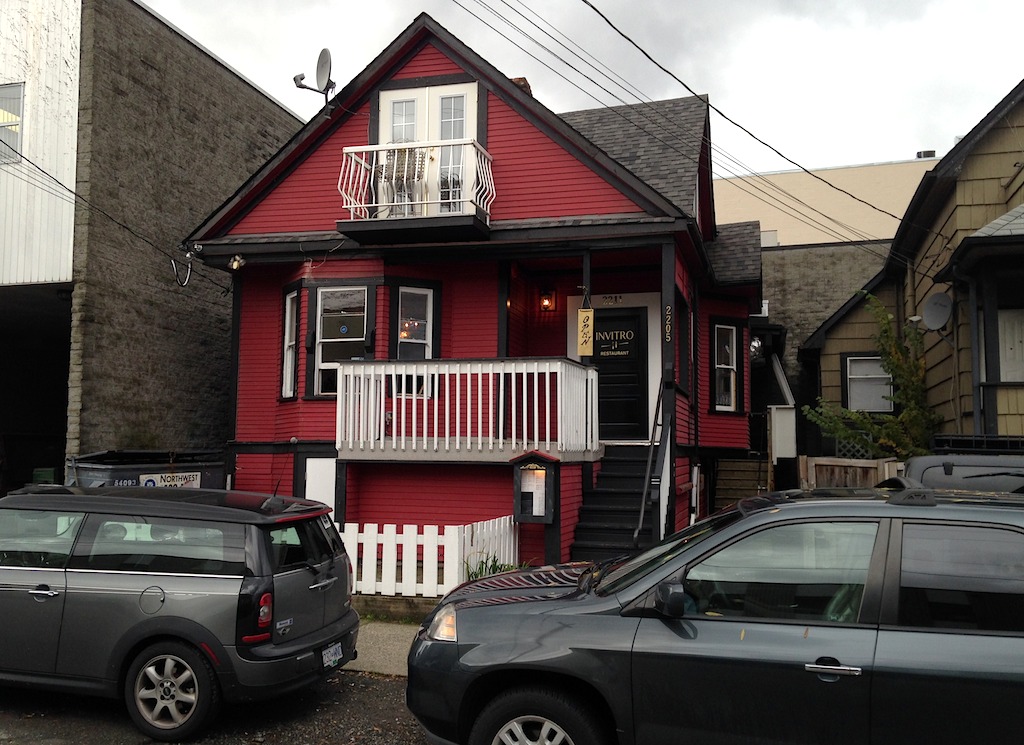 All photographs by Lindsay William-Ross for Vancity Buzz