George Frederick knew he wanted to serve his country from a young age. A very young age.

In 1942, at the age of 16, Frederick and three of his friends took a trip to a Royal Canadian Navy recruiting centre and tried to enlist.

“Of the four of us, two of us were too young, one failed a medical and tried to join the Navy, and the fourth one didn’t pass the IQ,” Frederick told Vancity Buzz. “The funny thing about the IQ is, he’s a brilliant guy, but in any event he failed it. And I’m not sure he didn’t do it on purpose. He later went into the American Navy, that [tests IQ] the same way as the others.”

Despite being too young, that didn’t stop Frederick from trying to change his date of birth on the enlistment form.

“We were 16, and the Bristol kit at the time was letter-sized, and I tried to change it and I got caught.”

Why try and change your age to serve? For Frederick, the reasons were pretty simple.

“Just to be part of it, that was the main reason,” he says. “Of the four of us, we all wanted to join. As a matter of fact, two of three of us prior to that had already been in the militia, the artillery. We were 15 then.”

After being turned away from the Royal Canadian Navy, on the way home to Fort Francis, Ontario from the recruitment centre in Winnipeg, Frederick and a friend found an alternative.

“We were walking down the street, and there was a [Canadian] Merchant Navy recruiting office handled by the Navy League of Canada,” he says. “And we didn’t have train fare home. So we went in there, just to see if we could get in, ‘Yes, we could.’ So we filled out the application, they paid our train fare home, and gave us enough money that we could have supper before we left.”

Almost two years later, Frederick went to sea. As part of the Merchant Navy, he traveled the world. Across the North Atlantic, to North Africa, Sicily, Italy, and the Mediterranean, the vessels he served on delivered supplies, vehicles, and munitions for the war effort. Despite being outside the line of direct fire, transporting vehicles and explosive materials had risks of its own.

“We had all sorts of war supplies,” he says. “We had an awful lot of bombs. In the convoy they put us in the centre. I listened to the old-timers then, and if they said if we got hit, we might take out two or three others. So they protect you.”

While Frederick says he didn’t see much direct action in his time at sea, it was a visit to a friend on the front lines in Italy that would see him perilously close to death. He traveled with a friend to the scene of open fighting near Rimini, Italy. 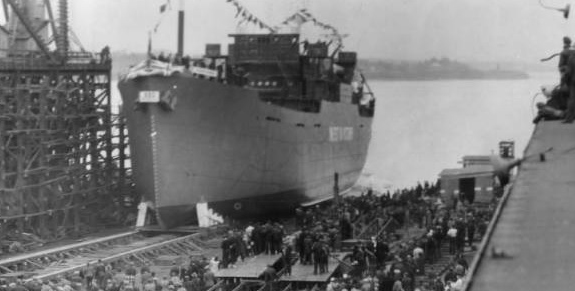 A Park Ship, of the style Frederick served on.

“We thought that a friend’s unit was up there, but they weren’t there, so we got there the night before and spent the night on the floor of a blown out building. That night a fellow came in with a Tommy gun and slept with us,” he says, laughing. What Frederick and his friend realized soon after that was just how close they were to the fighting, but it couldn’t snuff out their adventurous spirit and curiosity

“Spitfires were dive bombing the enemy. There was a burnt out tank with a couple dead guys outside – couple dead guys inside as well, actually – so we thought we’d go over in the open field,” he says. “We’d already talked to the Lieutenant in the dugout… so we went out to this burnt out tank, just to look at it, because it was hit pretty hard. One of those things that if you see it you want to look, because you’re curious.”

Picking up a broken mortar sight from the shattered tank as a keepsake, it was at that moment Frederick and his friend came under a surprise volley of German mortar fire.

“Us being Merchant Seamen, not trained Army who would have laid down, not us, we ran like scared rabbits,” he says. “After a few minutes it was all over, but I think we were the only Merchant Seamen [in World War 2] that were ever under mortar fire.”

Something he does recall from his time is the close nature of merchant work, and the bonds that it built between comrades.

“You’re a pretty close knit bunch on a merchant ship,” he says. “There are only 10 seamen. You work close together, and it isn’t a question of if you loved one another, for example, as buddies. You helped each other. I think we did that without even realizing.”

That charitable nature is something that would follow Frederick out of service. For the last 17 years he has worked with Legion Branch #118 in North Vancouver as Service Officer. With the tricky world of veterans benefits, Frederick has been able to help veterans like himself get the help they need later in life.

“The job of a Service officer is to look after the welfare of the veterans, the people who are – and I myself am one of them – a little bit shy about how to go about looking for help,” he says. “They can come to me, and if I don’t know the answer I know where to get the answer.”

“I’ve helped dozens. Dozens and dozens,” he says with a smile. “It’s an accomplishment.”