Fans of Vancouver’s growing music scene may recognize the band DiRTY RADiO. From radio play, to Canadian tours, to remixes and collaborations, these guys have been through it all in the last five years. With the ever-expanding and open arms of the current state of music in the city, I’ll be spending the next few weeks exploring the scene and learning about the local artists, labels and songwriters that are giving this city a musical note on the map.

To start my local focus, I found myself in a beautifully constructed historic music studio in East Vancouver. Greenhouse Studios has been recording some of Canada’s most well-known artists since 1987. And on one warm Friday evening, surrounded by instruments in a modern two-story open concept studio belonging to DiRTY RADiO, I sat with the three-piece to discuss music in our city.

No strangers to the music scene, DiRTY RADiO have three studio albums, several hit singles, and a Western Canadian Music Award (among several nominations). An eclectic sound combining indie, hip-hop feels, and electronic music, Shaddy, Tonez and Waspy (aka the DiRTY RADiO boys) are back this month with a new single and several tour dates.

You guys just released your first track of 2015 “Heartbreak Fantasy,” where was the single recorded?

Waspy: Everything is pretty much done in here (Greenhouse Studios). Before this, we were in a little room and we did an album and a half in there. But everything you hear that we do is done here.

Being from Vancouver, do you find this city influences your music?

Waspy: Now for sure. When I first moved here, there wasn’t really a scene at all. It was more rock kind of stuff. There were a lot of rock bands coming out. There was only really a handful of other dudes that we knew that were doing music, and nobody was really doing what we were doing. I feel like now, we still are one of the only artists in Vancouver that are doing the music we are doing. But recently, especially in the last year and a half, there have been so many awesome, younger people coming up who are really talented – like Pat Lok, Ekali, WMNSTUDIES and Blondtron. People who are not constricted to the rock thing, and are more experimental with what’s new.

I was just going to ask you that, as a band that formed in 2010, how do you think the local music scene has changed over the years?

Waspy: That would be one of the biggest things. The thing to me that’s been really cool is that I think Vancouver has a very polarizing opinion, most people are like ‘it’s really hard to make friends here’ or ‘people are snobs’ that kind of thing. In the last year and a half, especially for me going out and meeting people, I feel like people are a lot nicer, a lot more open to collaborate and I think that is the next step to get Vancouver to be on the map. Overall, we are in a really awesome spot in the Vancouver music scene. All my favourite people, we are working with. I feel like it’s been really positive.

And you are involved with different musicians locally, correct?

Waspy: We basically work together all the time, every day, non-stop. And then I got to a point, where I was just like ‘hey it would be really cool to look at other people in the scene who might be fun and inspirational and invite them to come to the studio and see what happens. Sam (Blondtron) was the first person I reached out to, just because I thought she was hilarious. We started working together and got along really well. She became a big supporter of ours.

Working with people outside of the three of us really helped us in the last year and a half. Suddenly your pallet of sound grows because you start figuring out other people’s taste, and what they like, and that seeps into the new music we’re making. It’s the energy of everybody, that collaborative energy, it’s why we are where we are right now. The Vancouver music scene was one of the biggest inspirations for us in the last year.

If you could collaborate with any artist, who would it be?

Shaddy: There’s too many different artists. Obviously Kanye would be cool.

Waspy: In Canada? It would be dope to collaborate with Kaytranada. We jacked two of his beats and did vocal flips over. Can we talk about that for a second actually? That’s never been done before.

Waspy: Basically, we came from being on the radio. When we put our very first record out, this music director at a station called Virgin at the time found our record and added our track right off the album. We had no radio promoter, we had nothing. Essentially our radio career started at that point, and all these other radio stations started picking our s— up. We got thrown into the whole Top 40 thing. Which is awesome, and really good for us, but nowadays everything fanbase wise is built online. So for us, even a year ago, we were virtually unknown online.

Last summer, we had a whole album done, and our management were going through a bunch of s—, so basically the project got put on hold. We were sitting there, Shaddy, Anthony and I, and were like ‘what should we do?’. We were listening to all these dope beats from all our favourite producers, and he’s (Shaddy) an amazing topliner- he can come up with melodies in two seconds. So we’d be driving around listening to music and he’d start writing on it. And we thought, ‘let’s make it a song.’ We would keep writing every single day over these different beats, and we thought if we flip them and make them vocal remixes, we could send them to blogs and that’s our in. Because they know who Pomo is, they know Kaytranada, they know who those artists are.

Shaddy: It’s no different than a hip hop artist making a mixtape and taking beats and rapping on it.

Waspy: Like Drake’s first record “So Far Gone” there are so many beats that he jacked and jumped on it.

Shaddy: And no one had really done that with electronic dance stuff, a lot of people just did that in the hip hop realm. And they are free, so we’re not saying we made the beat, we are saying vocal flip on a beat by so and so.

Waspy: In many ways, it was us siting who we were influenced by. We are big fans of all those artists, all those producers. This is repping us at this moment because we couldn’t release the original music that we had out because of all the stuff that was going on, and then through that, you’re writing every day, you’re being creative. We were virtually unknown on blogs until last September, with the first Pomo flip. Ever since then, we’ve been trying to put out a new track every month. And he (Pomo) knew about that one. If anything it is good publicity for everybody, and it’s not like we’re making money out of it.

That’s interesting, but technically not collaboration?

Got it. Ok, back to collaborations for a moment, who else would you want to work with?

Waspy: I think it would be cool to do a track with Chromeo. Or Sade.
Tonez: We just collaborated with a French producer named Jean Tonique, so that’s going to be coming out.

With the release of the latest single, and the collaborations, is an album on the way as well?

Waspy: No, those will just be tracks that come out randomly. We don’t have a plan for an album at this point. We have so many songs we could do an album, but it just doesn’t seem to necessarily be the most effective way to release music now because it’s almost too much content.

And the tour is coming up, what are you looking forward to the most about being on the road?

Waspy: It will be the first time playing any of those markets, and the venues are crazy.

Tonez: We are also debuting a new format for our show. And it’s all new music. Some of the locals might be a little confused. 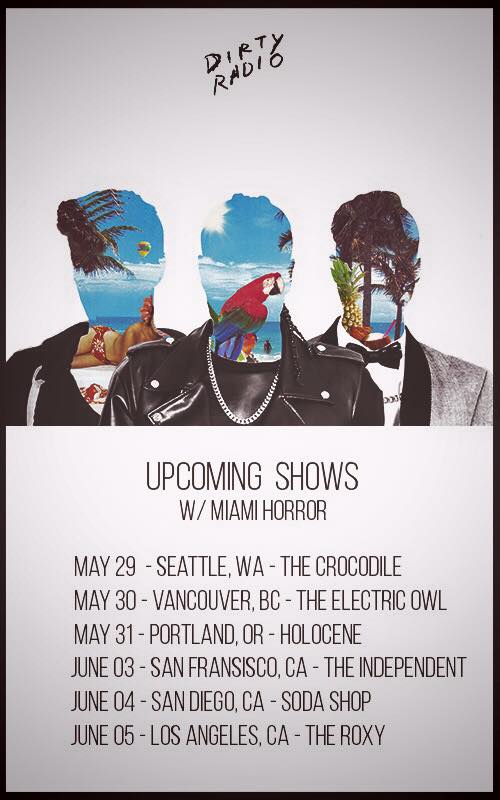 Check out DiRTY RADiO on their tour stop in Vancouver this weekend!