The Support Group is an upcoming web series that was created by, produced by and stars Capilano University’s Acting for the Stage Program graduates Lily Zarif, Sydney Doberstein Larock and Laura Carly Miller, along with series Director and Executive Producer, Tammy Gillis. Vancity Buzz sat down with these ladies to ask them a few questions about the series.

Tell us a bit about your show.

LM: Our show is about three unlikely friends, each facing their own challenges, come together to save their beloved support group.

What inspired the story?

SDL: There weren’t a lot of work opportunities for the three of us after graduating from university, so we created our own productions company, Beyond Theatre Productions.  We really wanted to work together to create our own work. We started out doing sketch comedy and wanted to work on a bigger project. We sat down at brunch one morning and started developing the idea of a comedic series.

Are any of you similar to your characters?

LD: The characters are definitely the big versions of us, in a weird way. We thought we might as well help out the acting types that we are similar to. For my character, Alexis, we went bubbly personality, happy-go-lucky, really cares about people.

SDL: They’re exaggerated versions of ourselves. It’s easiest to write what you know. Not that in real life, I’m a sex addict and that Laura can’t get over her ex, it’s just writing funny parts of us.

TG: For the role that I’m playing, we did two or three casting searches but had no luck and we were getting close to when we needed to shoot. It’s the type of the role I play a lot so I just put it out there and asked if they wanted me to do it. It turns out that they wanted to ask but they were worried it’d be too much for me with everything else going on – directed, producing and then adding in the acting.

LZ: It’s an elaboration of who I am but a lot darker. I also don’t think I’m as awful as she is.

SDL: A lot of Lily’s cynical sense of humour came out in this character. It felt like we’d seen Lily say those things before but this is just a more evil version.

LZ: It’s funny because one of the lines that I say in the series I actually said while we were on set and the makeup artist kind of looked at me and I realized that I’d written that into my character and actually said it in the show. 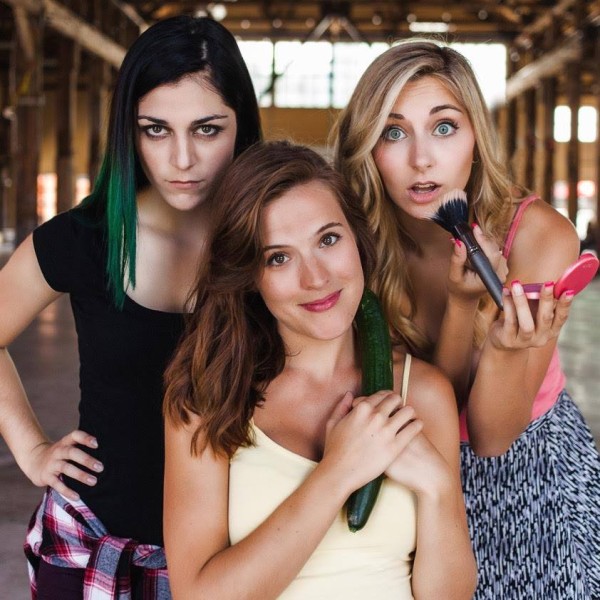 What do you want audiences to get out of the show?

TG: To be entertained. To laugh. I think the main thing that we really want from people is that we want people to enjoy it and laugh. There’s no deep reason other than the fact that comedy’s fun.

SDL: We also want them to feel something. Whether they like it or don’t like it, we want a reaction from them. Hopefully a positive one.

All three of you (Lily Zarif, Laura Miller, and Sydney Doberstein Larock) are writers on the show. What was the writing process like?

SDL: I did the least amount of writing because in the middle of writing, I was getting married. So, Lily and Laura spent countless nights writing and creating the storyline. Then they would pass it to me to proofread and throw ideas back to them. They get a lot of the credit for the writing. I was really only involved in the pilot.

LM: Lily and I writing it… We really became the ultimate best friends, sleepovers and staying up until three in the morning writing together on our laptops. I would do have an episode and pass it over to Lily. She’d pass it back and we’d add our funny character bits. It was fun but also took a lot of very late nights.

SDL: It was months and months. This wasn’t something that just came out over one week. It was months of developing the idea, passing it to Tammy to read, passing it to other people. We actually did a read-through at one of our apartments to hear the characters brought to life for the first time which was really scary but very beneficial.

TG: Then after that it went through a bunch of re-writes before we actually locked the scripts and had them ready for filming.

LZ: Laura and I work together so we’d be at work until late at night, then we’d take the train home and stay up until crazy hours because we’d bounce ideas of each other at work. Once of us would come around the corner and say, “What if we did this?” Over our shift, we’d grow those ideas and take them home and write them.

LM: That’s when the crazy jokes came out, super late at night. 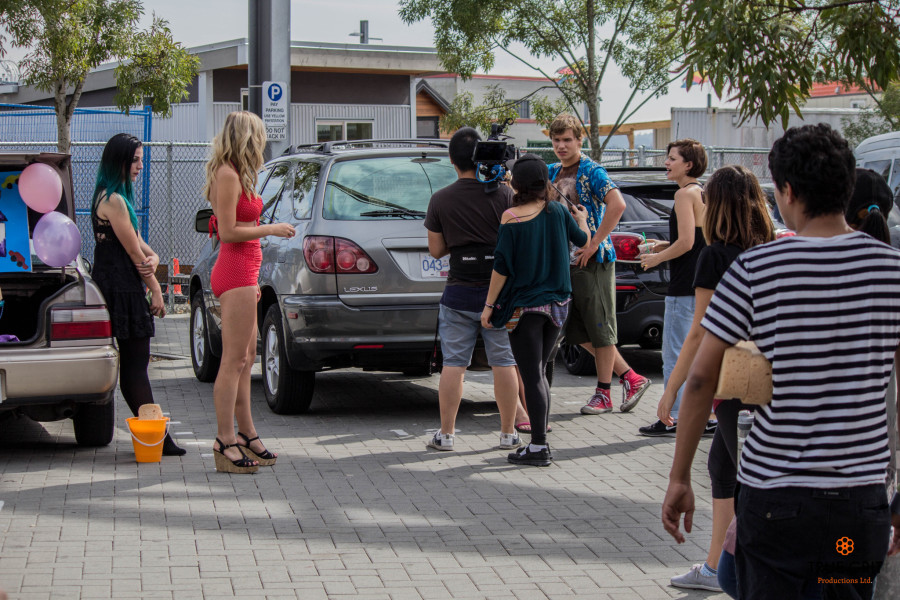 What made you want to star in your own webseries?

LM: For myself, it was to get the opportunity to be in a show, and potentially for it to grow to be something bigger maybe even for it to be developed into a series. It was also a way for us to learn all the different sides of film-making. We learned so much about producing, writing, getting crafty, and driving a U-Haul. There were so many different experiences – editing, especially. I suggest that any actor should sit in the editing room and just watch and learn. There’s just so much to take in from seeing yourself and how they cut it up. Things you don’t even think about.

SDL: That was probably the most valuable thing as an actor, sitting in on the editing sessions. You get to see what does and doesn’t work. But just going back to the question – I’d say the reason for creating the show, for me, was the challenge of it all. We’d only ever done sketch comedy skits that were only a few minutes long so developing a whole series was a huge undertaking. We’ve grown so much from it and met so many amazing people who believe in the project too.

LZ: I think, for me, a lot of it was making a comedy because I feel like I never really get cast in things that are funny. It was a really great opportunity to do something fun that I don’t think I’d necessarily have a chance to do otherwise.

TG: I came on board because I wanted to direct. I’d been approached to direct a play and a feature.  Then they brought me these scripts and it felt like this was the project I should start with. It’s been an interesting journey as it started out as this small idea and it’s now become this huge thing. The reach that we’ve had with it and the way that people are responding to it is really amazing. It’s put a little more pressure on us to deliver a great product because so many people are already interested so we are working hard to make it the best it can be.

SDL: It was a really big eye-opener for me how much actually goes into creating a project like this, how many people are involved and how each job and role is just as important as the rest because you need every single single person to get this project made. Basically, thank you to everybody that contributed their time, donated, commented or anything like that to this project, thank you!

TG: The release date is January 6th. We’re really looking forward to people seeing the episodes. We’re going to release them weekly on Wednesdays at 2:30 P.M. PT. We need you to watch on YouTube, subscribe, comment, like, tweet, and share! We’ve already been talking tentatively about a second season so we’re definitely going to see how the first one goes and we just need people to tune in and watch! 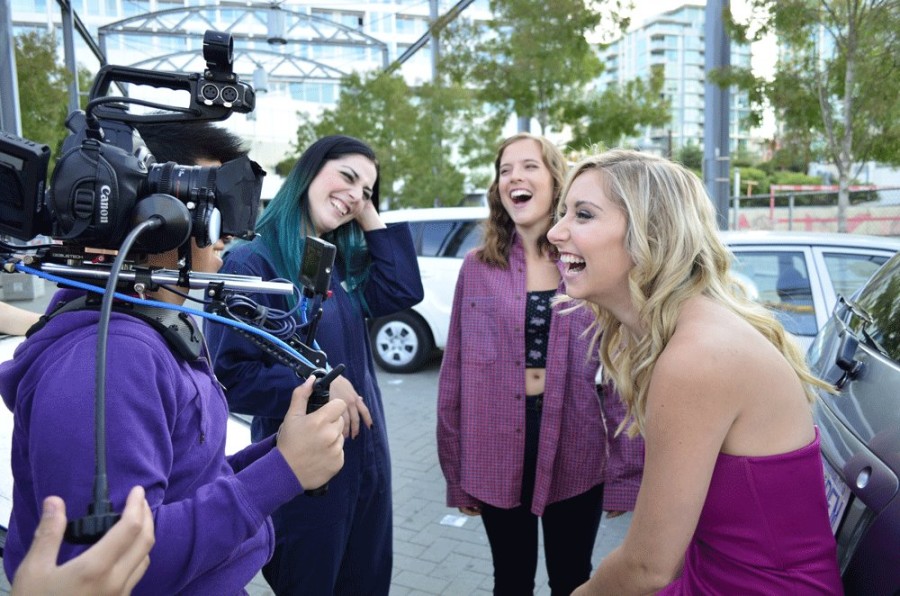 You can check out the teaser trailer below:

The Support Group premieres on Wednesday, January 6 on YouTube. The episodes are then released weekly on Wednesdays at 2:30 P.M. PT.