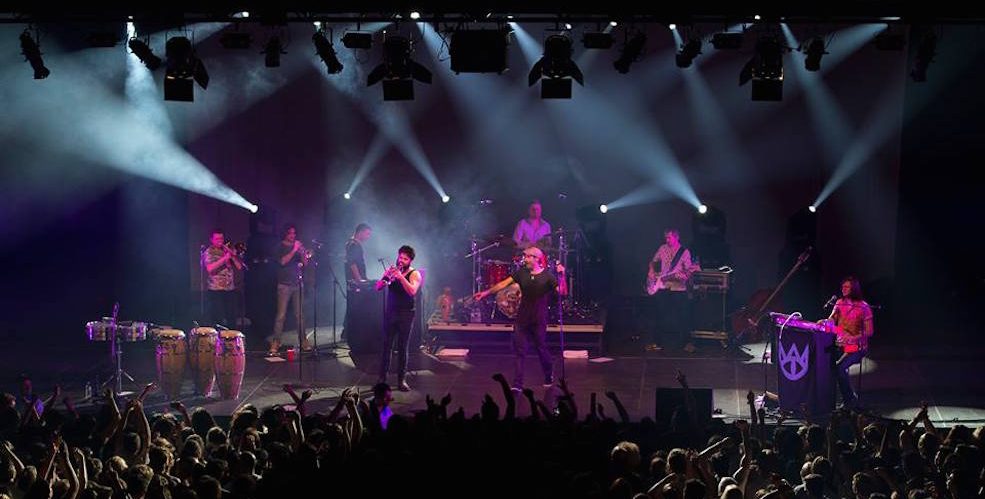 “Oh, this is my favourite subject,” enthuses Harry James Angus, trumpeter and vocalist for The Cat Empire, when asked about the many animal references made on the band’s newest album, Rising With The Sun.

There are three (obvious ones, at least) — “Wolves,” “Bulls,” and “Eagle” — and each nods to a creature that’s powerful in character and strong in symbolism. These are totem animals, Angus explains, and they embody a yearning for a sense of wildness in ourselves and in our lives. “They represent a fierce spirit,” he says. “A spirit that’s unbound by boring bureaucratic rules, and never checks its Facebook messages, and just lives in the woods, and is passionate, and all that kind of stuff. Which is, to be honest — most of the time we’re not that. But we kind of want to be that and we’re grasping for it.”

Free spiritedness is, in fact, something that has always been synonymous with The Cat Empire’s music. The Australian multi-instrumental six-piece has a reputation for never restricting themselves within any specific genre, playing with everything from jazz and reggae to funk and Latin-influences to create their joyous sound. It’s a vibe that’s hard to define on paper, Angus maintains, until the band performs live. Then, it’s just a matter of feeling the energy. “If it’s not going to make people dance, then it shouldn’t be on the record,” he affirms. “We’re a party band, first and foremost, and it’s as simple as that.”

Lately, though, the group has honed in on their sound more than ever. On Rising With The Sun, their sixth studio album, and even on their last release, 2013’s Steal The Light, The Cat Empire has made a concerted effort to use their influences as just a colour palette. “After a while, I really felt like we were just kind of copying these sounds from around the world and not really going that deep with them, but just getting a flavour, you know?” Angus expands, adding that this newer approach still results in something exotic, just not really from anywhere in particular. “We kind of had this image of this big, cacophonous parade marching down the street and that was our vision that we drew from for all our creative references.”

And celebratory it is indeed. Rising With The Sun is at once bombastic and soulful, with deeply set grooves lifted up by signature blasts of brass. It was both written and recorded impulsively, with the band walking into the Melbourne studio they worked out of with only a loose idea of what they wanted to do — something they’ve never really done before. “And it was great, because that’s basically what our live show is, when it’s good,” Angus continues. “And, so, a lot of the writing just happened really collaboratively and spontaneously and, you know, I think that’s actually how we should always do it. You know, that’s just the kind of band that we are. We’re a band who have a good chemistry when [we’re] together, when we all set up our instruments and play, and we don’t have to put too much deep thought beyond that.”

As joyous as the music is, however, it is balanced by pragmatism in its lyrics; more deeply so than on Steal The Light. “Bataclan,” for example, is a response to the terrible 2015 attack on the Parisian music venue, at which The Cat Empire has played often over the length their career. Angus maintains that writing about things that are more reflective of their realities has been due to a natural maturation over time, as the band approaches 17 years together. It’s something that has allowed them to continue to grow and better themselves as a creative collective.

And for The Cat Empire, there is no moment better than right now.