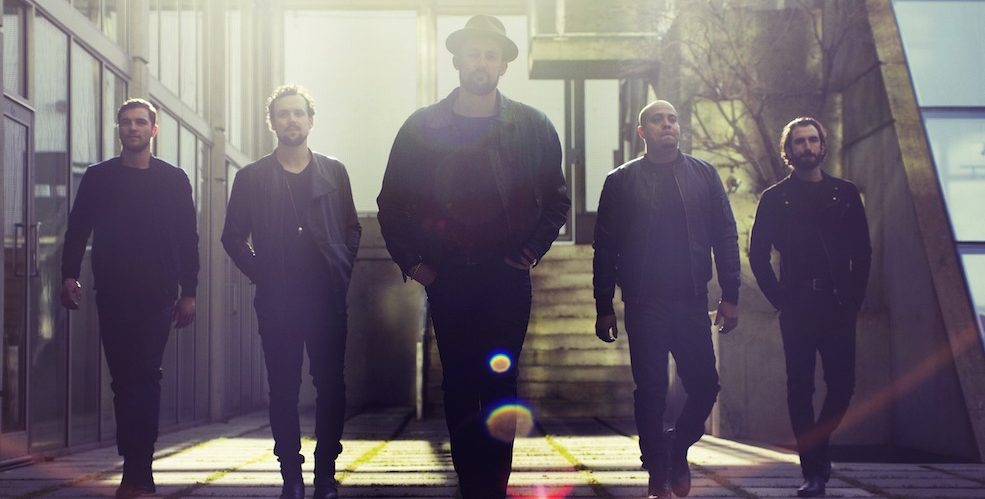 It’s early afternoon on a sunny Monday when brothers Aaron and Sean Ross walk into Le Pho, a Vietnamese restaurant in the Hastings-Sunrise neighbourhood. After giving a warm welcome to the host behind the register, the lead vocalist and keyboardist for the Boom Booms settle into a corner booth. They order lunch — vegetarian pho, with tea — and sit back, smiles on their faces. The food here is really good, they both say, and they come often. There is another reason behind those smiles, though, to be sure: a new record, The Day We Said Goodbye, due to be released in July.

A few days earlier, the East Vancouver alternative-soul band released the music video for “Song For Noni,” a track from their forthcoming album. Noni, short for Lenora, was Aaron and Sean’s grandmother. Aaron smiles as he describes her: “a sweet person with a good sense of humour that loved to dance.” The type that would put a warm cloth to your forehead when you were sick. They lost her to cancer in 2009.

The song, featuring just Aaron’s rasp and accompanying guitar strums, is beautifully stripped down and raw, exposing a tender side of the Boom Booms — a band best known for its exuberant, funk-infused music — that is not as often heard. And, as emotionally moving as the song is on its own, the video is just as so: Aaron sits on a stool with his acoustic as his grandfather looks on, before the two gently rock together with arms around each other.

The day Noni passed, the family gathered in the backyard, drinking and celebrating her life. “And that song popped into my head,” Aaron recalls. “Just the part, [singing] ‘oh how I miss you since you gone, your smile and Spanish eyes, the way you sang a song, and most of all the way you danced, the way you gave my heart a chance.’ That whole part, that arrived in my head. That was one thing. And then I tried to finish it many, many times, but I just couldn’t get it right.”

Aaron, the Boom Booms’ primary songwriter, kept the song tucked away for eight years. Then, one day, riffing on his guitar, the rest of it finally came to him. “You’re the apple of my eye,” he begins singing again as the server appears, balancing bowls of pho on her arms.

“You have the best voice,” she exclaims enthusiastically, placing the soup on the table. “I watch you on YouTube all the time.”

It’s been three years since the Boom Booms’ sophomore album, Love Is Overdue, was released. Much has happened in that time — “a lot of life stuff,” Aaron admits — including the departure of percussionist Richard Brinkman. “I think the touring-musician life was sort of taking it out of him,” the singer considers. “He wanted to set roots down and he did that, so I think it was good for him.”

Both Sean and Aaron, too, were at a crossroads and unsure if they wanted to continue with the band. After the Boom Booms’ sold-out show at the Commodore Ballroom in late 2015, they decided to take a two-month hiatus. It was the first solid break they’d had since starting the band nearly a decade ago.

“I was turning 30 or I was already 30,” Aaron says, swirling his chopsticks in broth, “and I’m thinking, ‘this has been a great thing to do for the last eight, nine years or so, but now would be a good time to switch over if I want to study up on something else and kind of make a change of direction.’”

“After we took the break, I felt like, to me, it was like, ‘recommit with more or call it,’” Sean says. “There was going to be a higher level of commitment or we were going to have to walk away from it. Going into this project, I feel like there’s been a whole new perspective on the way we do business, the way we handle ourselves.”

The Day We Said Goodbye takes its title from a lyric in “Song For Noni.” The name also seemed to be relevant to many of the songs, through of a common theme of saying goodbye — to people, to chapters of life.

“It’s weird, you know, I felt like there was a buildup of things happening,” Aaron says. “I wanted to challenge myself to write songs that were about real life. I felt like I just got into a rhythm of just writing songs. And a lot of stuff had happened, so on one side I just wanted to be able to process it, like a sort of self therapy.” He pauses and laughs. “I’m too cheap to ever go to actual therapy.”

There is a song about a breakup. About a friend who committed suicide last year. Another about a friend who was in a severe car accident and suffered brain damage. “But I think we succeed in having a good contrast between heavy themes and, I want to say, a feeling of levity in the music,” Sean insists. “Keeping things upbeat in [those] moments.”

“This makes us sound really heavy, but it’s not a heavy album!” Aaron adds, with a laugh.

While Love Is Overdue took inspiration from classic Al Green and Bill Withers, The Day We Said Goodbye dips into a diverse sonic palette that lets all their influences run free. The single “All Day And All Night,” for example, nods to the Strokes. “When I wrote that chorus, [singing] ‘all day and all night!’ I heard it as a Strokes song,” Aaron says. “But then we did a more sort of —”

“That funky kind of version is how it ended up happening. And then we’ve got this song ‘Lord Almighty’ that’s almost like the Allman Brothers or something. Or the Derek Trucks Band. And then there’s sort of, I would say, a Taj Mahal-inspired song, ‘Wasting Time.’ And then ‘Picked a Flower,’ almost like James Blake-was-recording-demos-in-the-‘70s kind of feel to it.”

The Boom Booms began working on the album last April, splitting recording sessions between a variety of places, including a rental house in Courtenay, in the Comox Valley. The Day We Said Goodbye is also the first record the group has totally self-produced. This afforded them the time to explore the depths of their creative ideas and really hone in on the arrangements they were after. “We wanted to capture the energy of our live show on the record, so that was how we approached it,” Aaron says.

“I’m just excited to release music,” Sean smiles. “I’m excited to be releasing songs that I know we’re all really proud of.”

Soup bowls have been cleared and last drops of tea sipped. Before Aaron and Sean leave the restaurant, they bid farewell to the server who, again, tells them how much she loves their band. The sun is still shining as the brothers walk out the door and down the street — and into the bright light of their next chapter.