Montreal-based indie band Stars return to Vancouver for two sold-out shows at The Vogue this weekend, but this is more than just a Canadian line-up with Hey Rosetta! opening. It’s a special reunion.

Almost 14 years since the release of their first album, Stars have shown no signs of slowing down. Being at the forefront of the bustling Canadian indie pop scene, the band was closely affiliated with Juno Award winners Broken Social Scene and indie label Arts & Craft. They have since played everywhere from small venues to major music festivals (including Coachella), and these guys know how to put on a show.

Known for their narrative lyrics, Stars released their latest album “No One is Lost” in the fall of 2014. The new wave, synth-pop record was shaped by changes and tougher times for the band over the last couple of years. One cold Edmonton winter morning, Stars drummer Pat McGee, took some time to chat with us about this and why the tour is a special reunion here in Vancouver. 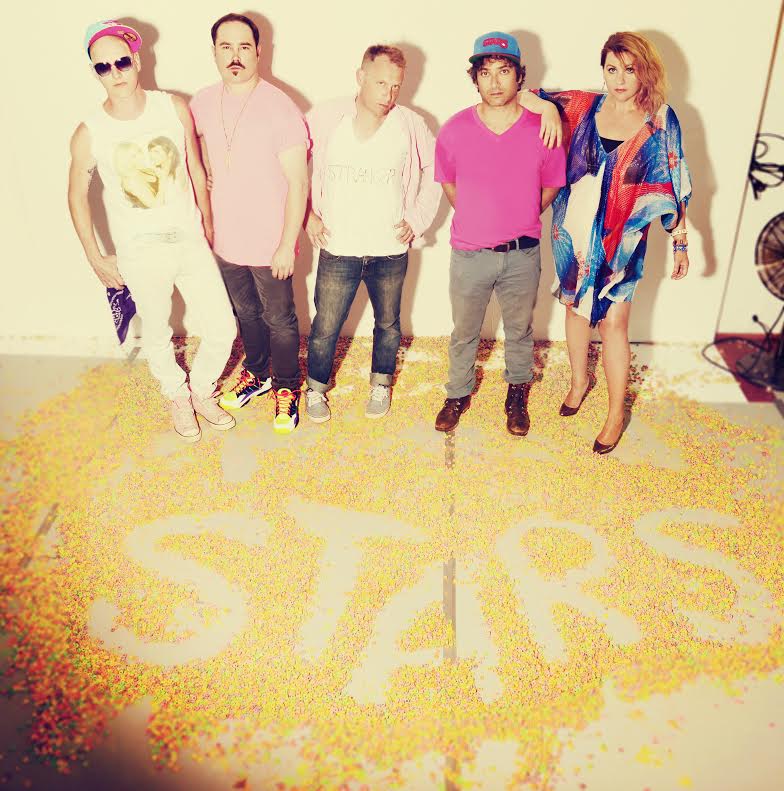 Congratulations on your seventh studio album, No One Is Lost. How has your artistic inspiration as a band changed or evolved since the first album?

To be honest, I’m not sure it has. I think our motivation has always been the same. Every album has had its own story, its on trajectory, but at the root of it all, we just somehow found each other in this world and the motivation is just there. We’ve gotten into a pattern, we tour, we play and when we stop touring, we start making music again. It’s not a terrible way to live. We come home, go to the studio every day and try and make music – which is exhausting and emotionally taxing of course. But it seems like all of us fell into this life. It’s just what we do. It’s what we’ve been doing our whole lives, and we continue to do it.

This album had much more personal touch to it due to your long time manager, Eoin O Leary, being diagnosed with cancer.

That was a crazy period, for sure.

How is he doing now?

He’s doing miraculously well. He was not given a great prognosis, and within a year of that prognosis, he was somehow cancer free. We’re thankful for that.

How did this affect or shape the record?

Like a lot of things that shape Stars’ records, it was traumatic. It was tough. There are all sorts of things going on at the same time, and it all kind of rained down at the same time. What we took out of it was that despite the darkness and deep uncertainty – it forced us, him being our manager, the guy we looked to historically to keep us afloat, it was our turn for him to look to us and for us buck up, and be positive and be hopeful. Which isn’t our forte. We tend to dwell on themes, like a lot of pop music does, heartbreak and that kind of thing. But I think it was time to flip it a little bit. We had to be the strong ones, and it was good for us. I think it made for some more uplifting music.

You are now on a major tour with Hey Rosetta!, and have lots of sold-out dates.

Yeah, thanks to everyone for coming out. You never know, but it is always shocking when you come and people are still interested in what you’re doing. Having Hey Rosetta!, it’s a bit of a one-two punch. Those guys are absolutely beautiful. It’s a lot of music in a night. It’s shocking to me that people are still around at the end of our show. I really think we – and I know all bands say this – but we really do have the best fans. They are so dedicated. We’ve never been the cool kids on the block. People are there because they love the music, so it makes for a really great night.

Do you guys have any secret tour rituals you want to share?

We are creatures of habit, there’s no question about it. The thing that keeps us afloat are the laughs. The group of people are absolutely hilarious. Otherwise, we are also a bunch of emotional wrecks and sensitive flowers, so that can be a destructive force. But everyone is so funny, and it’s been so long that we’ve had every fight, we’ve been through ups and downs. Spinal taps exist and life is ridiculous. It’s so hilarious and we are lucky to be able to see the humour side of it. We spend a lot of time together, but we don’t do any prayers to the indie rock God before we go on stage or anything like that.

You are playing two sold-out shows at the Vogue this weekend. What have your experiences been like playing in Vancouver?

Vancouver is amazing. A little piece of history here for you, when the Vancouver Olympics were on, we played up in Whistler and we played a show in Vancouver and Hey Rosetta! opened for us. We had done some tours with them before that and it was great, we loved them. We were really excited, then they came out and just tore the roof off of the place. Brought the rafters down. Everyone was going bananas after their show.

We swore at that point – love these kids, amazing band – we will never have them open for us again (laughs). They just smoked us. We had to go out on stage with everyone already destroyed and melted in their seats. We were like ‘we’ll never play with these guys again’. So when this offer came along, it was pretty hilarious. But it’s been great. It’s pushed both bands to step up the game a little. It’s been a great reunion.

What’s next for Stars after this tour is over?

We’re on tour basically until mid April, then I’ll have to reacquaint myself with friends for a couple of days. We have some summer festivals coming up, and some potential fall touring. We might try and write a little bit this summer. In between festival dates, maybe write a few more tunes and see what comes up in a relaxed summer vibe.

But I am really excited to get to Vancouver. Coming across this country, and its been absolutely freezing everywhere we’ve been. I hear you guys had a tropical winter this year.

Stars and Hey Rosetta! play two sold-out shows at The Vogue Theatre on February 27 and 28.