SNBRN is much brighter than his name.

From his colourful visuals to his energy-infused unpredictability, SNBRN’s set takes you through a state of happy trance – one that travels through multiple eras and music genres. Among his original tracks, Kevin Chapman – known to his fans as SNBRN –  will drop Snoop Dogg and Earth, Wind & Fire in a span of minutes.

The LA-based DJ delivers something far from a generic set, as Edmonton and Vancouver fans witnessed this past weekend. Taking part in Blueprint’s Northern Lights and Seasons Festival, SNBRN was a highlight in both electronic music festivals. As one of the earlier acts in the evenings, SNBRN, whose music is described as “sunset house”, managed to rile up the crowds and get the kids dancing to some ’90s and even ’70s hits.

“The crowd had so much energy,” SNBRN said after his Vancouver set. “I was a little nervous, but they fucking brought it. I was really happy.” Similarly, he said Edmonton was a huge show, and described Northern Lights as amazing. “It was just a great experience. These guys [Blueprint] are family.” 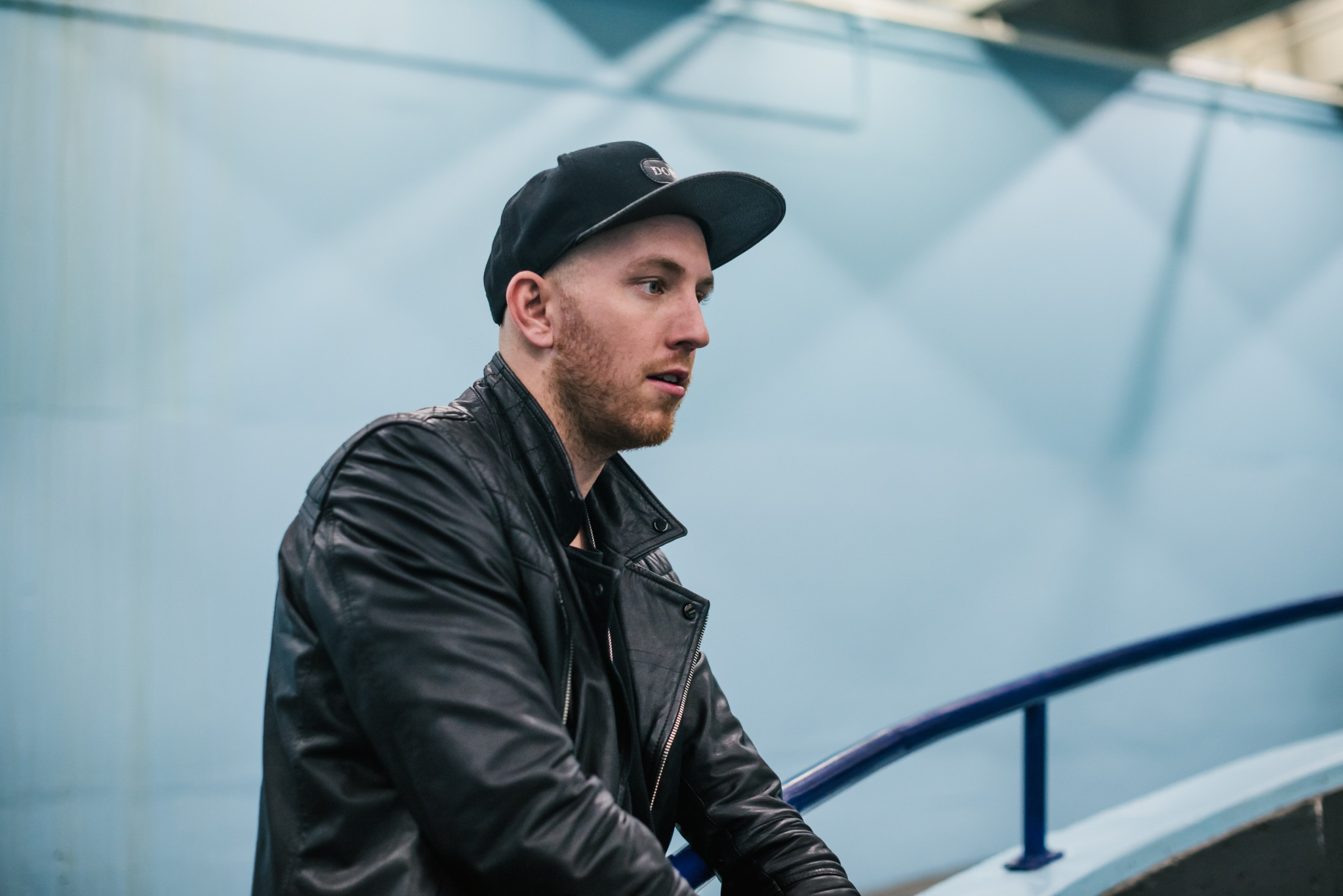 At both shows, SNBRN premiered his new track called Sometimes, which comes out mid-April and features Tobias Kuhn on vocals. “It’s different from everything I’ve done in the past two years,” he said. “I’m really taking my time. I’m only doing singles and originals now, no more remixes and spending as much time as I can on those. I am making sure that everything I put out I’m proud of, and it’s stuff that’s reaching forward.”

And nothing is more forward thinking than SNBRN’s original blend of hip-hop, nu-disco, and electronic. After all, it is SNBRN who managed to release the only official Nate Dogg material since his death in 2011.

[youtube id=”r0gmAq_TkAA”]
“After a year of tracking down his estate and doing all the paper work, I was the first person to ever clear any samples or anything with Nate Dogg’s family,” SNBRN said. “It was a pretty big honour to me that his family liked the track and fully support it. I want to be very respectful. I wanted to still have this old school California gangster rap feel to it.” And it did, with almost two million plays on Spotify since its release earlier this year, SNBRN’s Gangsta Walk featuring Nate Dogg was a clear hit. It does very well on a dance floor too.

In a music era where electronic is beats and bass, SNBRN somehow mixes in melodic rap and creates his own element of house music. When he first began remixing, two of his mixes were Ace of Base and 50 Cent- everyone’s guilty pleasures musically. SNBRN knew he wanted to do things differently from the start, and it was his love for hip-hop that drove him. 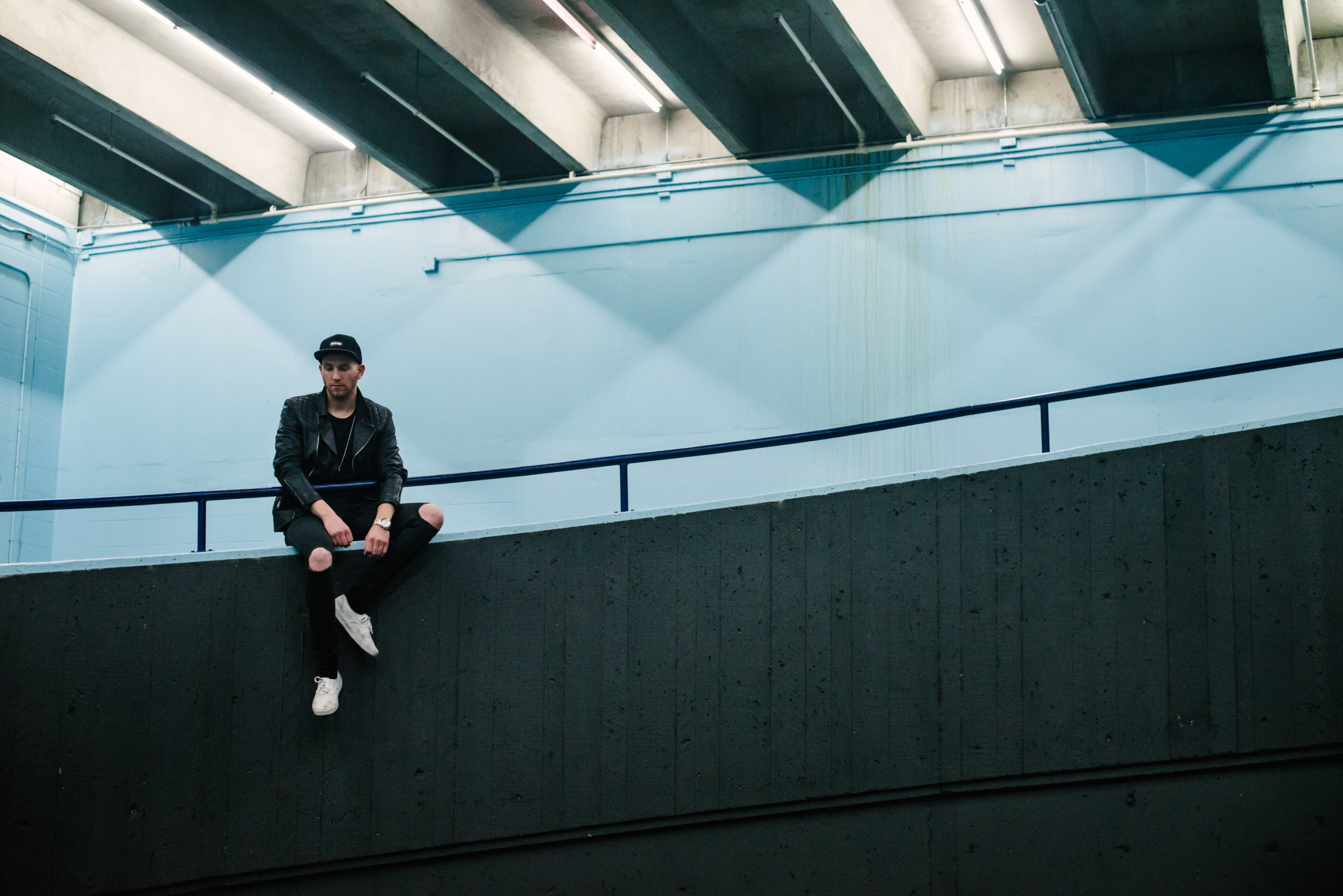 Hangin’ out with SNBRN/Brandon Artis Photography

“When I originally found my manager and went to him with my idea, I told him I want to be different. I want to do stuff that people are not doing. I want to hit stuff people haven’t remixed before. I want to be remixing songs that I love that noone has touched. Instead of remixing everything that is modern, I want to go back 15 years and hit the classics,” he said. “It brings a whole fresh new outlook on something that’s old.”

After remixing 50 Cent, SNBRN admits he downloaded the entire 50 album, and also listened to a lot of Ice Cube, E-40, and The Game. “I was on this spree listening to E-40 and all this old early 2000’s hip-hop bender.” 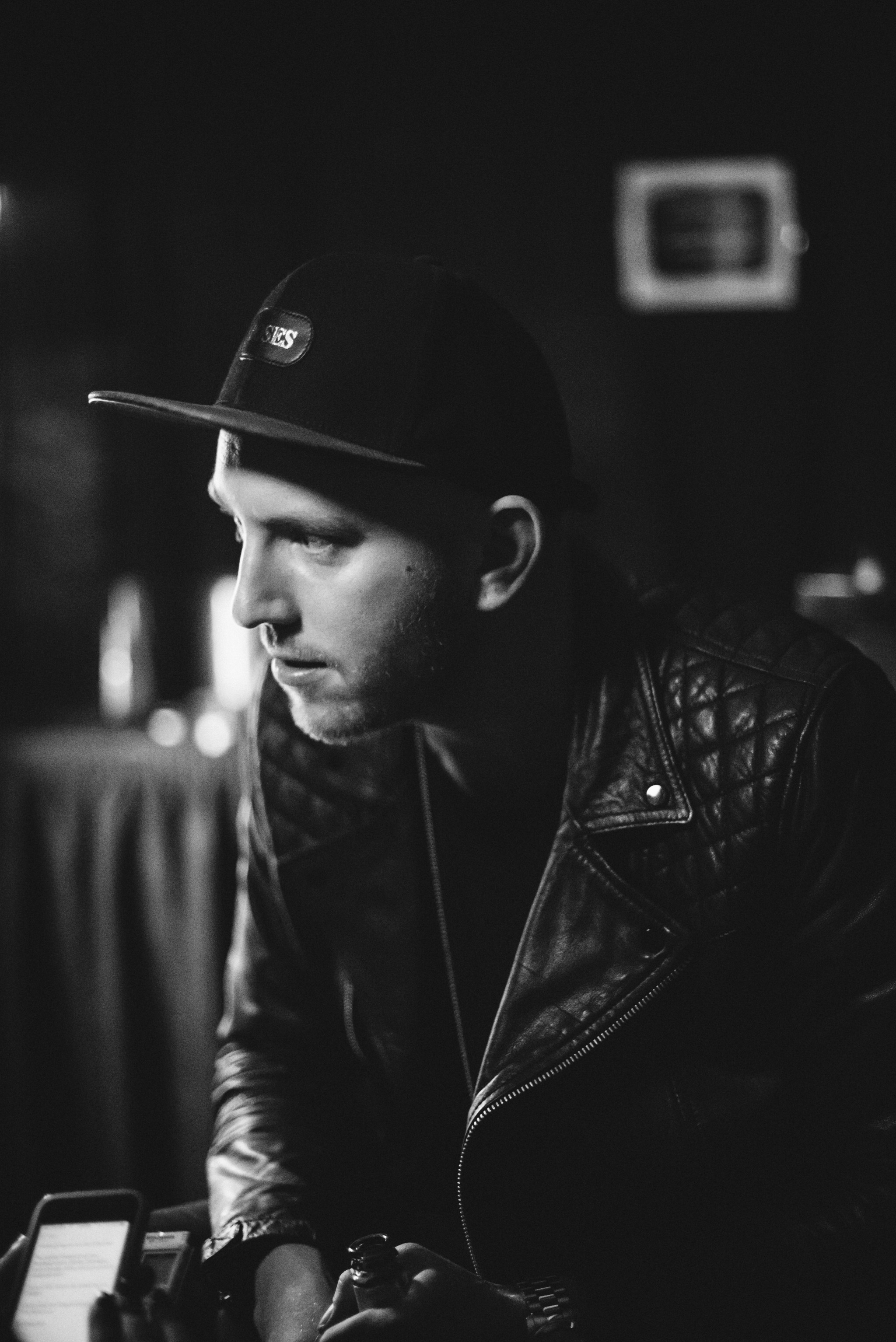 SNBRN during our chat/Brandon Artis Photography

A little surprising? Perhaps. But SNBRN (who is extremely charismatic and humorous) was full of surprises that night at the Pacific Coliseum, as we sipped beers and spoke of music. Not only did he tell tales of his love for hip-hop, but he laughed as he explained that his car in LA still has no auxiliary adapter, so he still listens to CDs. “There are three albums I’ve had in my car since I was 13, and they’re still in the car. There’s like NOW 37, Doctor’s Advocate (The Game), and Ice Cube.” Among the laughs, SNBRN also shows some love to Canadian music. “I love Drake. Besides a little bit of Bieber, that’s my guilty pleasure.”

With a background in music, you could say that SNBRN has a natural ear for it. He played jazz trumpet for twelve years, and also plays the piano and drums. He was in punk bands in high school, but ended up in film school right after. “I was in bands and did so much music stuff my entire life. I went to film because I like the editing process, sitting on the computer and being creative.”

His switch from film to music didn’t surprise anyone in his life, he said. And he now gets to be more creative – something many of us on dance floors are thankful for. “I like to be the life of the party, but I also like to be behind the computer for lots of hours. So this ended up working really well.” 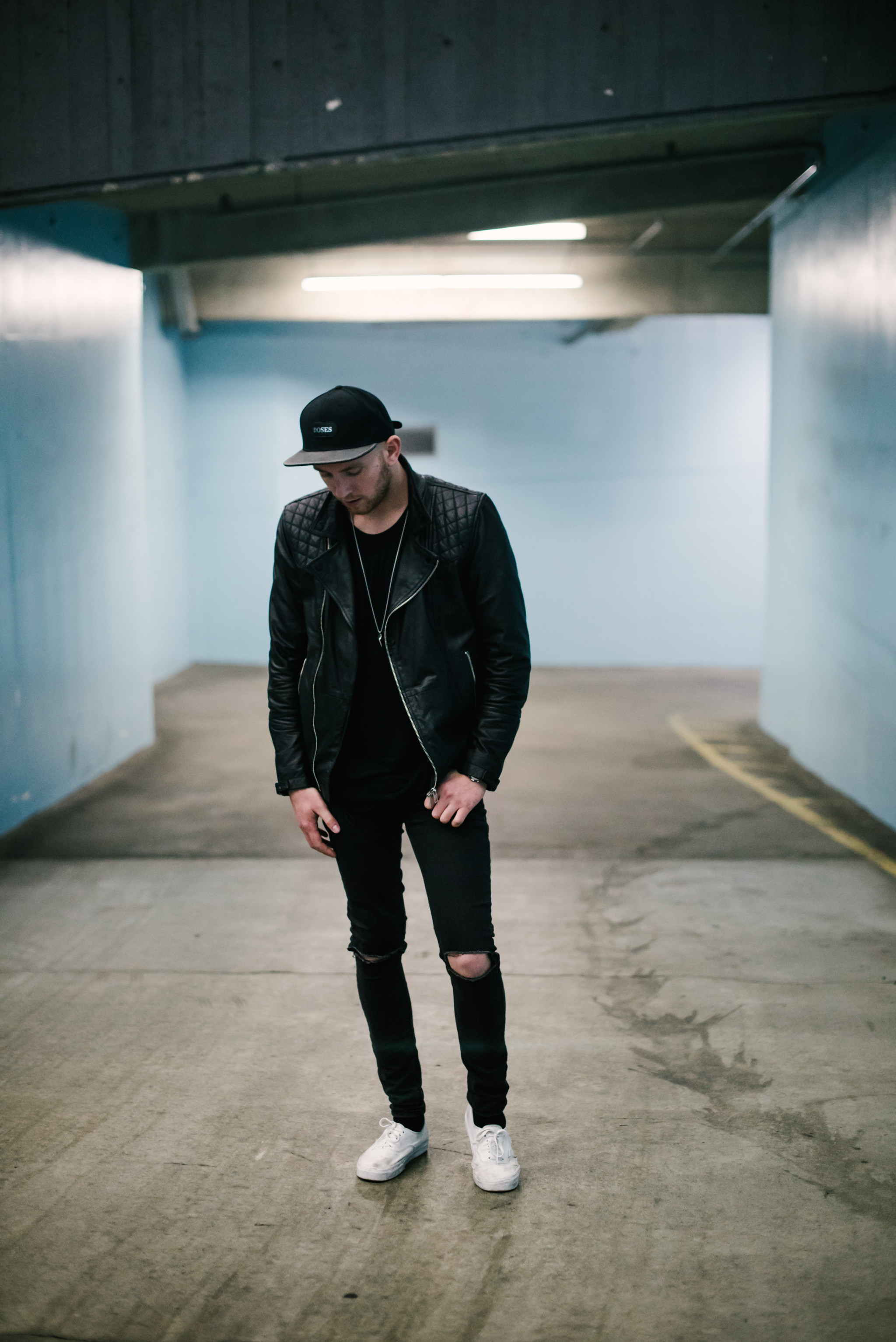 With dedicated fans globally, it does seem to be working really well for everyone. And as the life of the party, SNBRN has uncovered a life hack to get anyone out of bed. What started as a joke a year ago is now a tradition, especially when on tour and travelling with fellow DJ friends.

“I am not a Nickelback or Creed fan,” he began, trying so hard to contain laughter. “I started putting shit songs, horrible songs as my ringtone. And nothing will get everybody up in a room than (sings) With arms wide open. Everybody just gets up. I’ve heard it so much, it’s so awful. I wake up. It works. I jump to turn it off. I try to catch it before the lyrics hit.”
His hilarious alarm antics is only one of his talents. And although he admits he wanted to be a documentary film maker, the music industry – and alarm clocks everywhere- is welcoming SNBRN’s original take on house music. He’s at international music festivals all summer, and will be back in Canada hitting Calgary in May. And if you see Kevin Chapman on the road, be sure to say hi, and maybe bring a mix CD. Just don’t ask him how he came up with the name SNBRN. 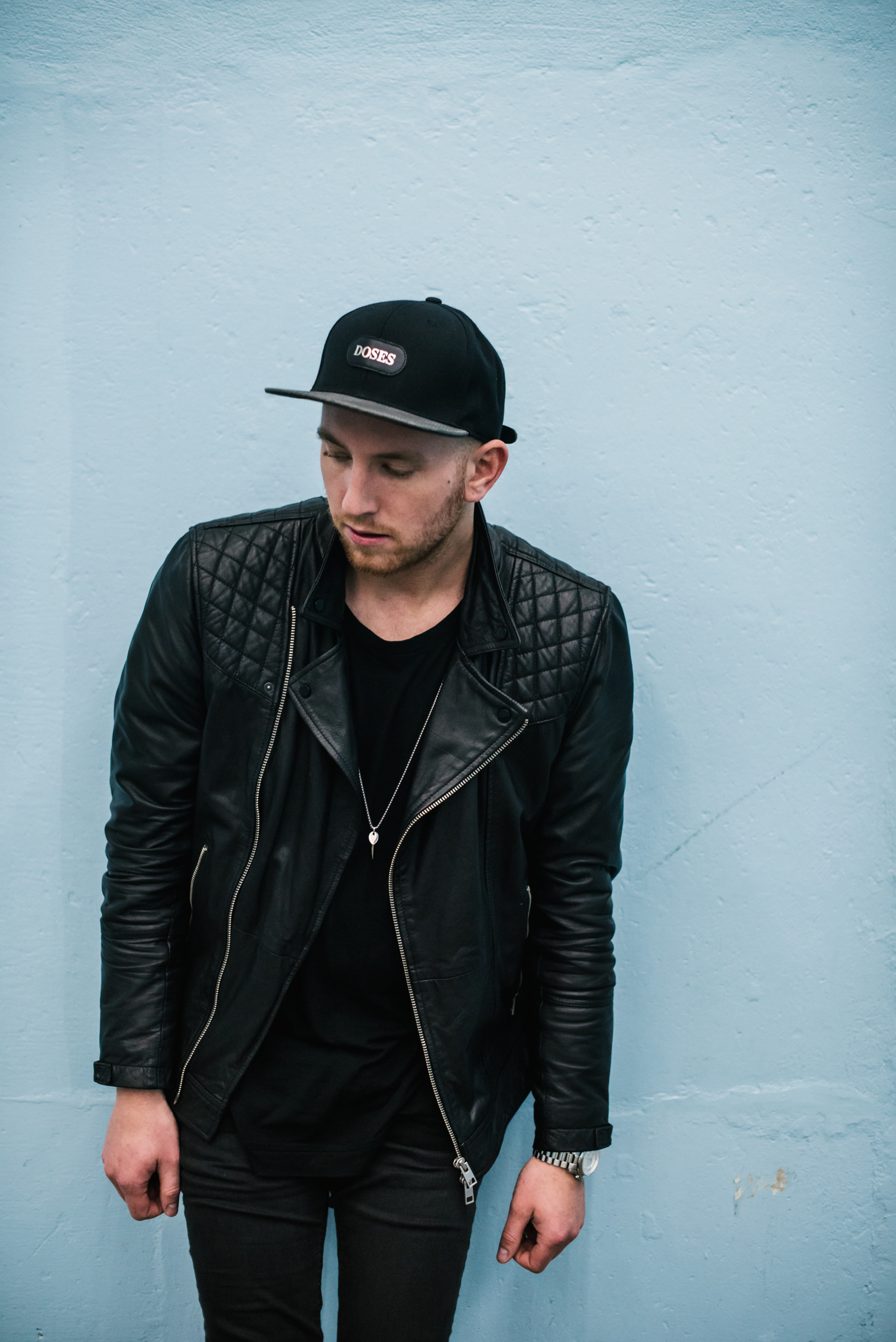