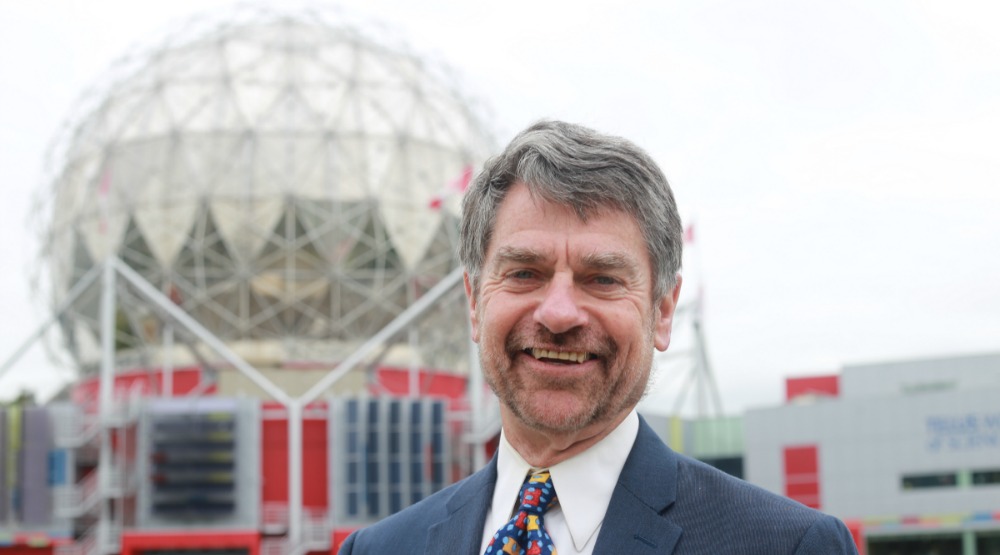 Most of us don’t see Science World as the little storefront that was once located on Vancouver’s Granville Street. But that’s where it all began.

The truth is that if you want to see the organization for what it really is, you have to put your vision of the big silver globe aside. At least that’s the way that president and CEO Bryan Tisdall explains it.

“We’re known as the bright shiny ball, but we reach out across the province in communities, working with children and families,” says Tisdall. “Because of Science World many people have had a value and appreciation of science in their lives – it’s not just about labs, test tubes, and research. It’s about what makes our lives enjoyable.”

Tisdall is retiring at the end of this month, saying goodbye to what has been a labour of love at Science World for the past 18 years. Inspired by his legacy, we sat down with him to talk about the history of Science World and the role that science plays in our community.

What did the beginning of Science World look like?

Science World started as a small storefront located on Granville Street, run by not-for-profit volunteers. They had aspirations of having a science centre like other groups. The specific growth was probably not fully anticipated along with the challenges and excitement of moving from then to today. There was an evolution in style and content. Science World has a definite personality – it’s colourful, engaging, and enthusiastic. I’m not sure if we initially understood that, but we appreciate the value of that personality in doing what we do. You’re more likely to be successful in influencing people that way.

Why should we care about science?

How are you changing the futures of kids and communities with science?

We give them exposure to people and experiences that are beyond what’s offered in the classroom throughout communities all over BC. We ask ourselves about how we can harness the resources of others through collaborations so we can all work together. Science World isn’t about parachuting into a community but rather working with local champions to identify what we can do best.

One of our many programs is Science and Innovators in the Schools. We gather scientists within children’s own communities – there are scientists doing real science who will talk to children about what they do. This program is successful because it might feature someone in your neighbourhood who knows the community and what’s important there. Through all our programs, kids recognize that science is important to how they live. They become inspired to search for a future or career related to science, which also helps move BC forward.

How can we keep up with science and tech?

Part of the fun of keeping up with science and tech is being ready for new changes and embracing those first moments of the experience instead of rushing yourself to learn. That produces anxiety, but I think that’s part of the thrill of the journey, the uncertainty and the forks in the road and what’s to come. You’ve just got to have fun and see where it leads you. That’s a scientific method too. You never have the full information, but you have the best information that you could have at that very point.

In some ways I thought I’m never leaving, not ever, ever, but that’s not realistic. If there’s a time to move on, you want to move on when times are good, and clearly time is good for Science World and this is an important time for it. I can’t wait for the next thing, taking all the experiences that I’ve had to date and being ready for the next one. We will see what that is.