Nardwuar the Human Serviette is as legendary as he is obscure. Equal parts interviewer/radio personality/punk musician, his tartan cap, unique interviewing style, and unrelenting energy have been a fixture of the Canadian media scene for decades.

Nardwuar – born John Ruskin – conducted his first interview almost exactly 30 years ago, something he’s celebrating tonight with Nardwuar’s Video Vault. As the head of his high school’s student council, he was responsible for booking bands for dances. After asking his fellow students what bands they’d like to see, his musical education began.

“All the kids recommend punk and rock bands like The Engimas from Vancouver – who went on to become The Real Mackenzies – The Villains, a great ska band, punk bands like The Young Canadians,” Nardwuar told Vancity Buzz. “The kids are giving me all these names, and I knew nothing about music, so I just went out and tried to find these bands and book some of them to play gigs.”

It was around this time Nardwuar first heard about UBC’s CiTR radio. With his love of punk music just beginning, the volunteer enthusiast programming of CiTR became the perfect outlet. After graduation, he enrolled in UBC for history, but initially swore to himself he wouldn’t get involved in CiTR.

“When I was president of the student council I almost flunked out of high school. So I thought I didn’t want to get involved in any extracurricular activities,” he says. “I lasted one day.” 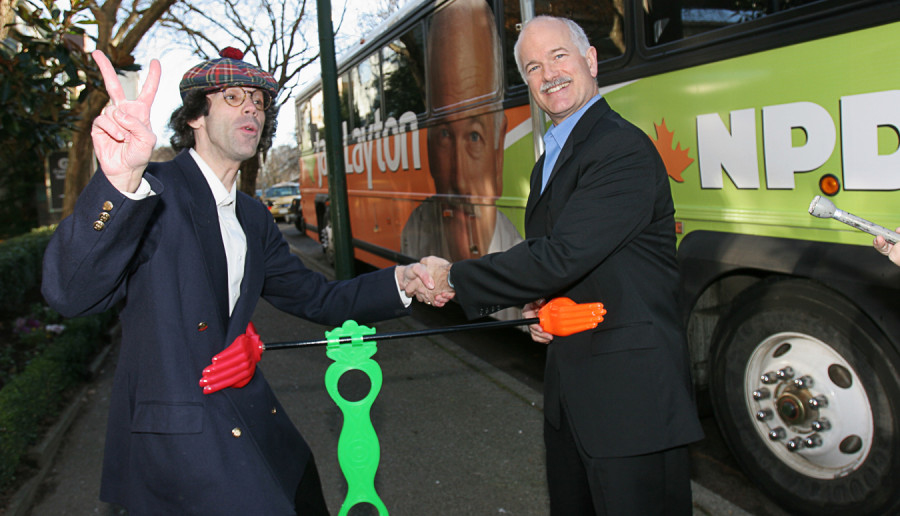 That was in 1987. Twenty-eight years later, the Nardwuar Radio Show is still going strong, airing Fridays from 3:30 to 5 p.m. Since then, he’s interviewed everyone from local punk musicians like Poisoned and superstars like Macklemore, to world superpowers like Mikhail Gorbachev, former leader of the Soviet Union.

Nardwuar’s love of interviewing was fostered by, of all people, his mother. As the presenter on a local television program called Our Pioneers and Neighbours, a young Nardwuar was confused as to why his mother would spend her time talking to people he then described as “not famous.”

“She [said] ‘everybody has a story. These people’s stories are just as interesting as totally famous people. They’re the pioneers, the people that helped develop the community,'” he says. “I was taken by that, and it got me interested in doing interviews. So I thought if I was going to do interviews I would try and find some neat little tidbits of information.”

These “neat little tidbits” would go on to more-or-less typify Nardwuar’s interviewing style. His ability to research and produce obscure parts of history have gained him praise – and sometimes confusion and disbelief – from his subjects. During an interview, Nardwuar has done everything from present Queens of the Stone Age front man Josh Homme with a grade school photo of himself, remind legendary rapper Ludacris of a forgotten middle school friend, to unearth the first album dubstep mogul Skrillex was featured on – under a totally different name. 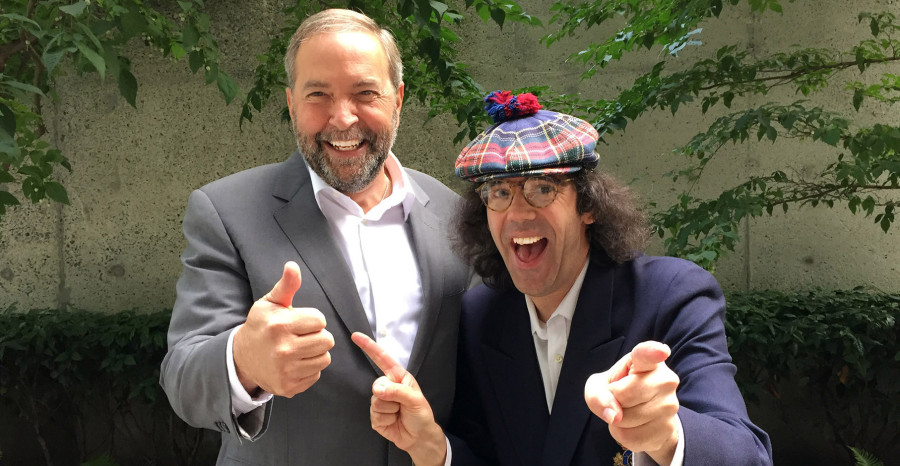 When it comes to tracking down these obscure pieces of an interview subjects life, Nardwuar makes the source of his ability very clear.

“It’s because I care,” he says. “Most people couldn’t be bothered! Who’s going to spend a week researching Snoop Doggy Dogg?”

Using the example of his first interview with Snoop Dogg, Nardwuar says he was initially hesitant, as he didn’t know anything about the rap legend, being primarily a fan of punk and rock music. After doing a bit of research, he found out Snoop was a fan of American comedian Red Foxx. After getting a Red Foxx doll from a friend of his, Nardwuar brought it to the interview, surprising and delighting the rapper.

“Other people could have brought Red Foxx dolls to Snoop, but they probably couldn’t be bothered to go ask their friend, or go find the actual doll, or they think they know all the answers so they think ‘Oh, I don’t have to do any research I know it it all,'” he says. “I just took a bit of time to do it. It’s all out there. All the stuff is there.”

Outside of the music world, Nardwuar has gained some notoriety through his interactions with political figures. In 1990, he told then leader of the Soviet Union Mikhail Gorbachev to “Keep rockin’ in the free world” – his signature catchphrase – but in Russian, before asking him “Of all the world leaders Dr. Gorbachev has encounter, which wears the largest pants?” 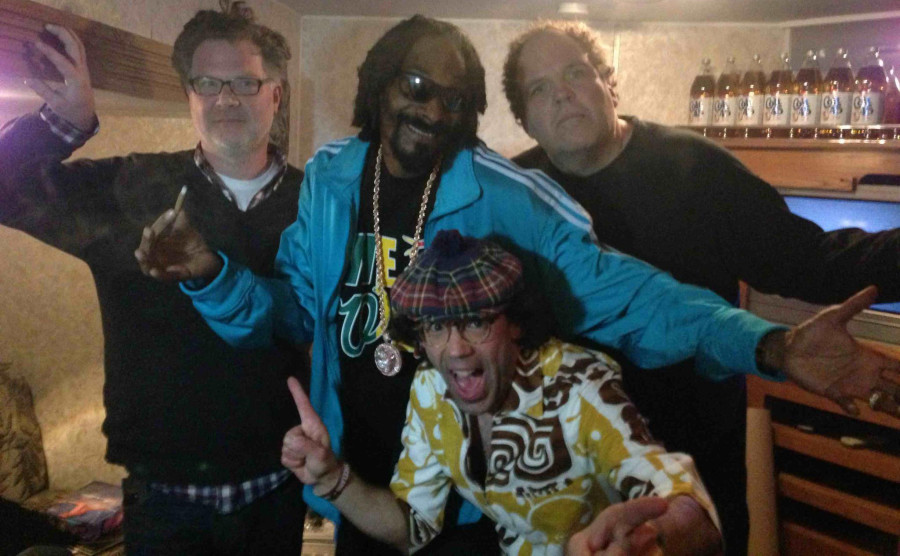 On the Canadian side of history, people might not realize that Nardwuar is responsible for a piece of Canadian history. In 1997 – seven years after his notorious interaction with Mikhail Gorbachev – Nardwuar cut off all his hair to sneak in to the Asia-Pacific Economic Cooperation (APEC) conference with then Prime Minister Jean Chrétien, and asked him if he supported the pepper spraying of UBC students during protests. Chrétien, not understanding the English terms “mace” and “pepper spray” responded, “For me, pepper, I put it on my plate.”

“All the reporters ended up using that quote. Of course, they didn’t say Nardwuar asked that,” he said. “I couldn’t believe it. These were the same reporters that were trying to get me kicked out of the press conference… and all the reporters come back to my question to file their stories! That for me was the ultimate response. It’s in Canadian History for Dummies!”

Narduwar’s further jaunts in to Canadian politics over the last few years have been well publicized. Before the 2003 Federal Election, Nardwuar interviewed each of the federal candidates, and convinced Paul Martin to play a game called “Hip Flip,” which involves two players holding plastic hands against their stomach to support a thing bar, and then shaking their hips to attempt to flip a plastic piece over the bar. After Martin was elected Prime Minister, Nardwuar commented on the fact that neither Stephen Harper nor Jack Layton had agreed to play.

This federal election, Nardwuar has done the “Hip Flip” with both NDP candidate Tom Mulcair, and Liberal candidate Justin Trudeau.

One thing in particular that sticks out to Nardwuar is that in all his years of covering Canadian elections, he has been unable to talk to Prime Minister Stephen Harper, even before he was Prime Minister. At a recent event in Vancouver, Nardwuar was stone-walled by Conservative staffers.

“They called me out of the room where all the reporters were and said ‘Whaddaya got in that bag? That’s the Hip Flip. We saw you do that with Justin Trudeau. We don’t do Hip Flips. We don’t do comedy,'” says Nardwuar. “I didn’t say anything beacause I thought hey, maybe I can a least get a general interview with Stephen Harper and the guy said “Well, talk to me afterwards.'” 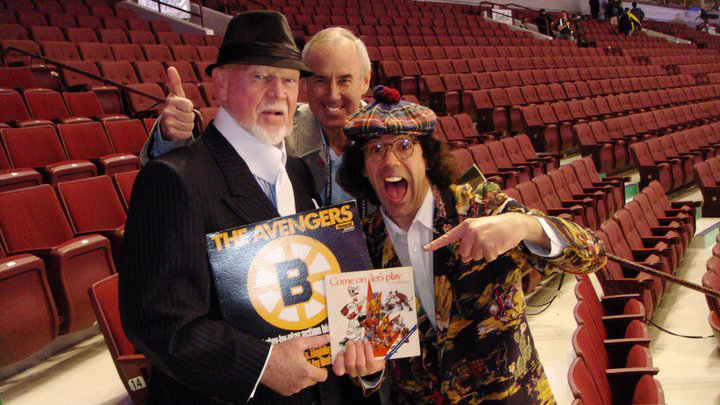 Besides the lack of interest in the “Hip Flip,” Nardwuar says the structure of Conservative press events is also unusual. Where as most press conferences have a freestanding mic which reporters line up behind, the Conservative event had a staffer holding a long pole, at the end of which was a microphone, which would be lowered in front of the reporters chosen ahead of time.

“They do that so nobody can grab the mic and ask an extra question,” says Nardwuar. “They have the mic on a pole. On a pole! I went up to guy and said ‘Hey remember you said to talk to you afterwards? Could I maybe talk to Stephen Harper?” and he said “Sorry, he’s talking to senior citizens right now.'”

Having had run ins with the Conservatives in the past – including that aforementioned carrying-away during the 2004 election – Narduwar seems unfazed by the way of things.

“It’s pretty wild that the NDP and the Liberals seem to have no problem with the media, but what Stephen Harper does is pretty ridiculous,” he adds. “I don’t think it’s too surprising, because I think it’s been ramping up that way, but it’s pretty hilarious.”

All of these interviews and opportunities Nardwuar credits to his work with CiTR.

“You’re right there on the front line with the reporters when you’re doing this stuff, when you’re a part of UBC CiTR Radio,” he says.

Even 28 years later, Nardwuar’s enthusiasm for UBC CiTR Radio is undeniable. He attributes his career, and his drive to improve himself, to the values instilled in him by the volunteer community over the years.

“Anybody can join, whether you’re young or old, and you just learn so much,” he says. “I just think that people, when they’re part of community radio, they just know that there’s more out there.”

According to him, the listeners themselves also contribute in a large way to the lessons, brutally honest as they are.

“When you’re doing your show on CiTR, the callers are ruthless. Like they will call up and be like ‘Nardwuar this is f—— boring and you suck!’ and I’ll say ‘Oh, well how can I improve myself?’ and they’re like ‘F— off and die!’ or something like that,” he says, laughing. “But I’ll always try and ask them, or I’ll remember that they said it’s boring, so when I’m doing an interview with someone I’ll think ‘When I play this back on CiTR, somebody might think it’s boring! I better try harder so people don’t phone in and yell at me.'”

With an album on the way from his punk band The Evaporators, and his weekly radio show going strong, Nardwuar is looking to take a trip down memory lane with Nardwuar’s Video Vault. The event will have Nardwuar talking about some of his favourite interviews through out the years, and show some videos from of his favourites, including his time as a freelancer at Much Music.

More than anything, he hopes to get people interested in public radio.

“I always like to inspire people that if I can do it anybody can,” he says.

When: Friday, October 2 at noon