Based on the Stephen King novel ‘The Colorado Kid’, Haven follows small town police officers as they deal with the often horrific ‘Troubles’ plaguing the townspeople.

At the end of season 4 Nathan and co. managed to apprehend William, the man at least partially responsible for the Troubles, and throw him through a gate to another dimension. However, Bryant confirms that this was not the cure-all solution the good guys hoped for. “Initially in the first episode we’ve left season 4 with Nathan doing a thing that he thought was going to fix a bunch of things and it turns out that it hadn’t, in fact it had grave repercussions. So now he’s dealing with the consequences of his actions. But somehow he’s still undaunted and has this stubborn faith that he can get Audrey back, he can fix all of this and he can help Audrey somehow bring an end to all this suffering. I think we’ve seen in the past a lot of Nathan’s bullheaded, blind sometimes, faith in her. There’s more of that, but I would say it’s ratcheted up to a whole new level this year.”

Audrey, our heroine and Nathan’s love interest, came out of the ordeal not feeling exactly like herself. She had in fact reverted to her original, evil, personality; Mara.

“She’s certainly not Audrey, but she really looks like her. I don’t think he knows what to think of her initially, doesn’t have a clue how to deal with her. Thankfully he gets some ideas early on which further bolster his trust in his need to keep pushing to get Audrey. I don’t think that he thinks that they are the same person.”

As to how Nathan’s faith in Audrey will persevere now that she’s become Mara, Bryant describes it as a belief that Audrey is still within his reach. “He doesn’t have a blind faith in Mara by any means, but he has some belief in his ability to somehow salvage Audrey from all of this and believe somehow that she is the answer to how to make things better and that his love for her is somehow the answer too. That causes all sorts of conflict with the others who keep pointing out that Nathan’s done this for a while now and it hasn’t always worked out. In fact it’s had pretty serious consequences in some ways. Nathan has to take responsibility for those and deal with those.” 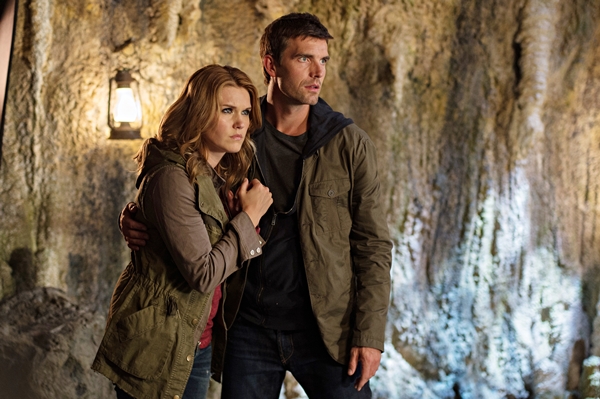 Season 5 is going to be formatted differently than the earlier seasons. It is being called a ‘split season’ and will be double the length, but split into two sections. “They are sort of two separate stories. It’s all connected, but they will air most likely as separate seasons. The first thirteen, for Nathan it’s about the battle for Audrey Parker and I think – I don’t really know because we’ve just started in to the second 13 – but that seems to be a whole new set of circumstances and problems that have changed Haven completely forever.”

We can also look forward to some completely new types of Troubles this year. “Some are gruesome, some are creepy, there’s a bunch of really weird and wild Troubles coming up. One of my favourites is a ‘Freaky Friday’ trouble with people switching bodies. There are some Troubles that are unlike anything we’ve seen before.”

Something Haven hasn’t always had is a clear villain, but last season that part was filled by William. With him gone Bryant says that Mara will somewhat step into the role, but she won’t be the only threat. “In some ways initially that void is filled by Mara, but then there are other forces at work which I can’t tell you about at all, but which become possibly even more dangerous.”

With Audrey having so many versions of herself, and now having transformed into a ‘bad guy’ version, one wonders what it would be like if other characters did something similar. Bryant is confident that Nathan won’t be undergoing any sort of dramatic personality changes, though. “To explore other sides of Nathan’s character that we haven’t necessarily seen would be an exciting trip for me, but I think the thing about him that is frustrating but is also one of his greatest qualities is that he is so doggedly devoted to her and that he will not waver and will not falter and will not change in that devotion. So as much as I’d love to play other aspects of him I think that a lot of his strength comes from staying the same.”