There is something majestic about Haywyre’s music. The young electronic producer has created his own unmistakable style, mixing traditional classic and jazz with modern beats. Recently moving from the U.S to Canada, Haywyre, or Martin Vogt, now calls Vancouver home and will be hitting the local stage next week at Blueprint’s FVDED in the Park.

Over fourteen years of studying piano has led to Vogt’s unique musical foundation. His mixing and progressive compositions are evident in his 2014 LP “Two Fold, Pt 1.” Although it’s tough to describe Haywyre’s genre, his Facebook page sums it up well, “Post Avant-Garde Pre-Futuristic Jazz-Fusion.” This eclectic mix caught the attention of Vancouver-based label, Monstercat, who now work with Vogt exclusively on his releases.

Potentially still an unknown in Vancouver’s music scene, the Indiana native won’t be unknown for long. This summer, he is hitting the festival circuit including his stop at one of Vancouver’s largest electronic summer festivals: FVDED on July 3-4. I recently met with the Vogt – probably one of the loveliest producers I’ve ever met – at the Monstercat headquarters to learn more about this must-see up and coming talent.

Was nice to meet @Haywyremusic at my show in Vancouver. I got inspired by his music lately, go check him out! pic.twitter.com/Mkwj4weNNN

On Twitter recently, Oliver Heldens said he’s been inspired by your music. But we know so little about you, I am curious about your jazz background.

I started studying piano performance when I was about six years old. My parents enrolled me in classical piano lessons and that’s kind of where it started for me. Eventually, as a teenager, my parents said, ‘you don’t have to keep taking lessons unless you want to.’ And I decided I didn’t want to. I wanted to switch to studying jazz piano instead and so I did. I stuck with it because I liked the improvisation aspect a lot. There’s more wiggle room, more flexibility in terms of what you can do.

You’re from Minneapolis. How long have you been living in Vancouver?

Not too long, eight months now.

How are you liking our city?

It’s awesome. It’s the best city I’ve ever lived in so far. Temperatures are way better than Minneapolis. I like this city a lot, obviously being more connected with nature is never a downside. I like that aspect a lot. Transportation is pretty awesome here too.

And how do you like the music scene in the city?

It’s great. I am finally getting more involved. I’m not sure what the local jazz scene is like but I’d like to explore that a bit more. I’ve also been thinking about maybe trying to make some connections with people locally to try to jam out with them a little bit because I do miss that aspect. When I was in college it was easy, I was surrounded by musicians. It’s a little harder when you’ve moved to a a new city, let alone a new country.

How did you get involved with Vancouver-based label Monstercat?

Originally I had started talking to Brady, who is also known as Fractal. He’s a producer who’s been releasing on Monstercat for a while now. I’d send him works in progress on occasion and he’d give me some criticism. Eventually I sent him a tune and he said that Jon (Monstercat A&R) might be interested in signing the track. And Monstercat works on a track by track basis, as opposed to signing artists for a year then require them to release a certain amounts of tunes or something like that. He sent them the tune, and they were interested. So we started to work together from there. I did another single with them after that. Ever since then, I’ve been working with Monstercat pretty much exclusively in terms of releasing my music.

You’ve released an LP with Monstercat now, what was that experience like for you?

I started releasing albums every year starting in 2009. And that album by far was the most successful, most thought out. I could feel the impact it had, much more than any in the past. One of the things that I liked a lot about it was hearing back from a lot of producers that I really looked up to. Hearing from Mat Zo, Rob Swire from Knife Party, just a wide assortment of people had something to say about it, which I thought was cool.

Let’s talk about touring. You’ve headlined a tour date this year, you’ve played with a ton of artists in awesome line-ups, from small venues to festivals. How different is it for you with your music?

It’s hard to say. I haven’t really had as much experience with festival performances and they are very different. The dynamic is totally different. It seems like indoors, in smaller spaces, it feels like there’s a more immediate reaction to what you’re doing. I like that kind of intimacy. The festivals that I’ve played so far have been pretty fun too though. It’s just really different.

You are playing quite a few festivals this summer, any particular festival you’re looking forward to?

I’ve heard quite a bit about Shambhala, and I am also pretty excited about Electric Forest as well. I’ve been hearing about that for years.

What can Vancouver expect seeing you at FVDED?

I’m still petty new to the electronic music performance scene. Most of my performing was as a pianist, in combos or trios. As I started developing my set over the first few tours that I did, it was definitely more catered to venues and clubs. Now, after playing the two festivals Counterpoint and Summercamp, although I was really happy with how things went, I do have an understanding of things I might change about it. But I think in general it will be very performance heavy. The entire time during my performance I am either improvising, or playing melodies that I had written for the pieces. It will be relatively dance friendly but still inspiring and performance heavy. I’m excited to be playing at FVDED.

What’s next for you?

I have a few collaborations in the works. I’m collaborating with Gramatik, who I am a huge fan of. The biggest thing on my schedule is my next album- which will be the sequel to “Two Fold, Pt 1.” Ideally, I’ll get that done in the next two to three months or so. That’s the plan.

Catch Haywyre at FVDED next week, or while he’s on tour this summer! 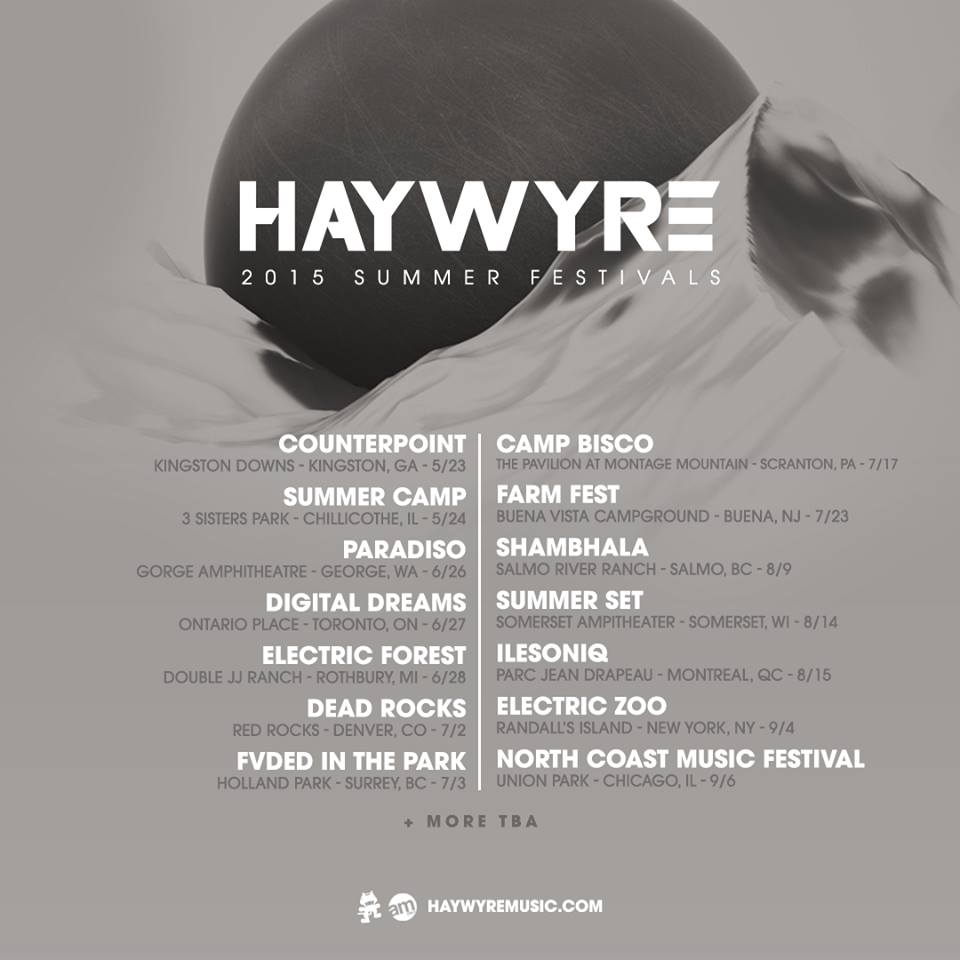